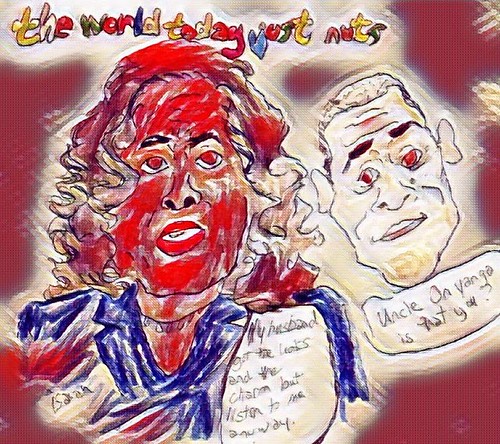 above is Isaiah  THE WORLD TODAY JUST NUTS  "Outreach" which went up sunday.  now this is from ramzy baroud ('antiwar.com'):

"No one cares about the prisoners." Over the past few years, I have heard this phrase – or some variation of it – uttered many times by freed Palestinian prisoners and their families. Whenever I conduct an interview regarding this crucial and highly sensitive topic, I am told, repeatedly, that "no one cares."

But is this really the case? Are Palestinian prisoners so abandoned to the extent that their freedom, life and death are of no consequence?

The subject, and the claim, resurfaces every time a Palestinian prisoner launches a hunger strike or undergoes extreme hardship and torture, which is leaked outside Israeli prisons through lawyers or human rights organizations. This year, five Palestinian prisoners died in prison as a result of alleged medical negligence, or worse, torture.

Even international humanitarian aid workers, like Mohammed el-Halabi, are not immune to degrading treatment. Arrested in August 2016, el-Halabi is yet to be charged for any wrongdoing. News of his plight, which originally received some media attention – due to his work with a US-based organization – is now merely confined to Facebook posts by his father, Khalil.

As of October 1, el-Halabi has been paraded before 151 military trials, yet unaware what the charges are. The cherished Palestinian man, who has played a major role in providing cancer medicine to dying children in Gaza, now holds the record of the longest military trial ever carried out by the Israeli occupation.

Desperate for some attention, and fed up with cliches about their "centrality in the Palestinian struggle", many prisoners, whether individually or collectively, launch hunger strikes under the slogan: "freedom or death". Those who are held under the draconian and illegal "administrative detention" policy, demand their freedom, while "security prisoners", who are held in degrading conditions, merely ask for family visitations or food that is suitable for human consumption.

if you had to guess, when will the palestinians be free from persecution?  when i was younger, i really thought it would be by the end of the 1980s.  now?  i think it could be 2050.  whole generations will have died from war crimes before they get justice.

i think we've reached mass awareness about their plight.  we just don't have action.  we should be collectively standing with them, standing up with them.  but it's not happening.  :(

Monday, October 12, 2020.  NYT and CNN correspondents cover their outlets with something other than glory, the Day of the Girl goes unnoticed by the US press, Grand Ayatollah Ali al-Sistani calls for the militias to disband, and much more.

"This year’s theme, “My Voice: Our Equal Future” calls on us to amplify the voices of adolescent girls, and put their needs at the forefront of laws, policies and practices in every country and community around the world" -

The OHCHR, UNFPA and UNICEF issued the following:

11 October marks the International Day of the Girl Child, a day dedicated to girls' empowerment, fulfilment of girls' rights and solving challenges that they face.

This year, the global theme is "My Voice, Our Equal Future," a reminder to listen to girls , understand the changes they want to see and to ensure that all of them have an equal opportunity for a bright, safe and healthy future.

In Iraq, the challenges experienced by girls and boys are many and complex. Violence against children, including young people is unacceptably high in Iraq, with 80 per cent facing violence at home and in schools. Many girls in Iraq, like millions of girls around the world, suffer from female genital mutilation, child marriage, sexual harassment and abuse, and other harmful practices.

Girls across Iraq continue to be particularly affected by increased insecurity, which in turn has imposed restrictions on movement that affects their access to education, protection and jobs. Young girls are keen to make the most of opportunities, have specific interests, identities and experiences and are keen to share accountability in their development, exercise of human rights and ensure their gender-differentiated needs.

The COVID-19 pandemic and restrictions on movement have elevated risks for girls to be violated and abused. The number of gender-based violence cases has increased since the onset of COVID19 pandemic in Iraq according to the Protection Cluster Monitoring in Response to COVID-19 (August 2020)

Interviews conducted by the United Nations with families living in displacement camps across Nineveh governorate, affirm that child marriage remains a frequent practice and a coping mechanism for families living in poverty to reduce the financial strain.

Education and learning are some of the best ways to empower girls and protect them against violence, exploitation and social exclusion by providing them with the opportunity to build a better life for themselves, their families and their communities. To make education and learning accessible and empowering for girls, it needs to be safe and gender sensitive.

Having zero tolerance to bullying, cyberstalking, sexting and harassment should be a priority for all as part of the national COVID-19 efforts to reimagine school systems and learning, we must address violence against girls of all ages in and around classrooms and on digital learning platforms. Because girls have higher risk than boys to experience violence, verbal and sexual abuse, a multi-sectoral approach is needed to address all risk factors and cases. Youth-friendly, accessible and quality education and learning, health and social services are essential for girls' empowerment and their development.

Ending gender-based violence is not a far-fetched dream; this is a real possibility. All that is needed is for girls to have access to formal education, , skilled, civically engaged, healthy, supported, and protected at home, in institutions and at the community. The alternative is devastating with a lasting negative and damaging impact to the health, education and well-being of Iraqi girls.

We call on the government, civil society organisations, the private sector, faith-based groups and the international community to accelerate their efforts to:

Girls can be powerful agents of change, and nothing should keep them from participating fully in all areas of life. We must come together and show our commitment by dedicating resources for girls to realise their rights and fulfil their full potential.

Media queries?  Don't make me laugh.  Find the English language outlet that even bothered to note the day.  They can't even be bothered to Tweet about it.  Take the idiot Peter Baker who we called out last night.  Along with his stupid Tweet comparing the death tolls of pandemic to the death tolls of US troops in conflicts (and only US troops -- no foreigners were included, no US citizens were included), Petey managed to wag his limp noodle enough to do five Tweets about his new bad book co-written with his wife (about the equally hideous James Baker).  But people who weren't worth millions?  People like Iraqi girls?  Peter has no time or interest in them.

He couldn't even be bothered to reTweet The World Food Program:

The lives of girls are disproportionately changing in the face of conflict and hunger. On the #DayOfTheGirl

, we remind the world that peace is our only path to a better future for all. 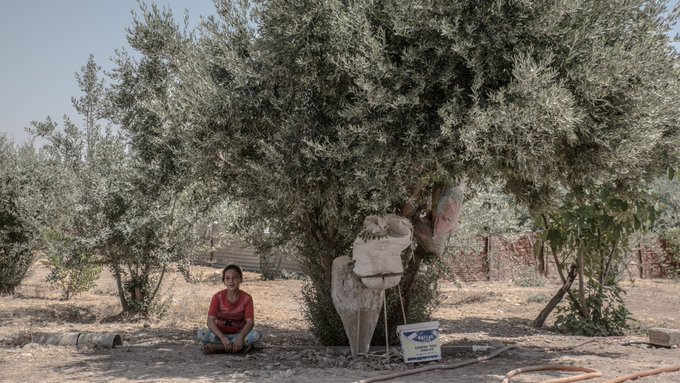 “I drew our house and this is my missing brother inside.” These are the heart-breaking words of Layla, a nine-year-old #girl in #Iraq showing strength, resilience and hope for a better future. On the #DayOfTheGirl

, we salute Layla, girls in #Iraq and across 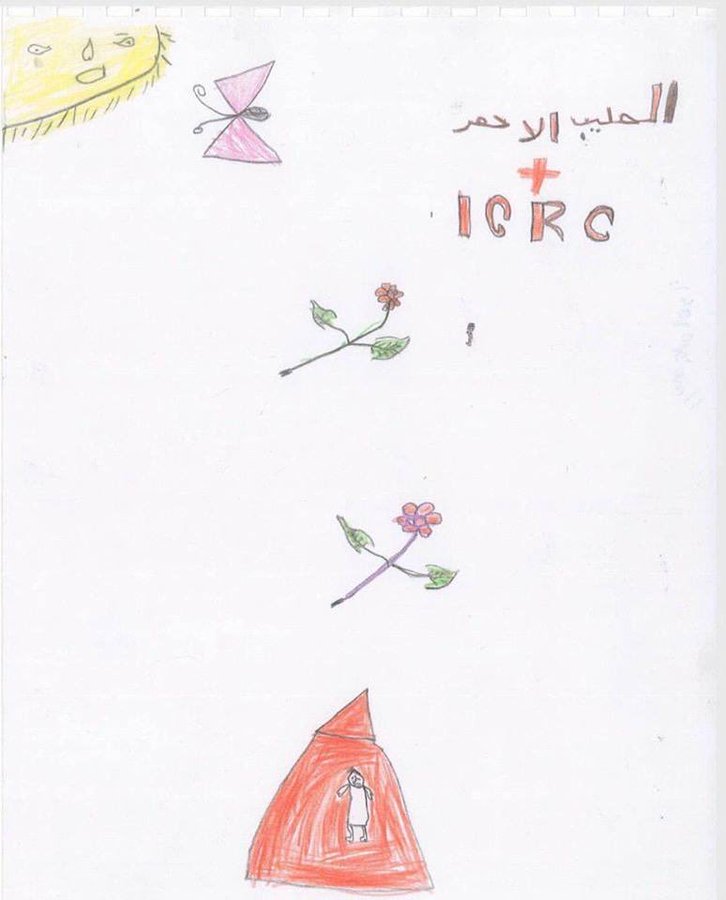 let us not forget girls like 2-year-old Bedoor, who was displaced by war in Iraq 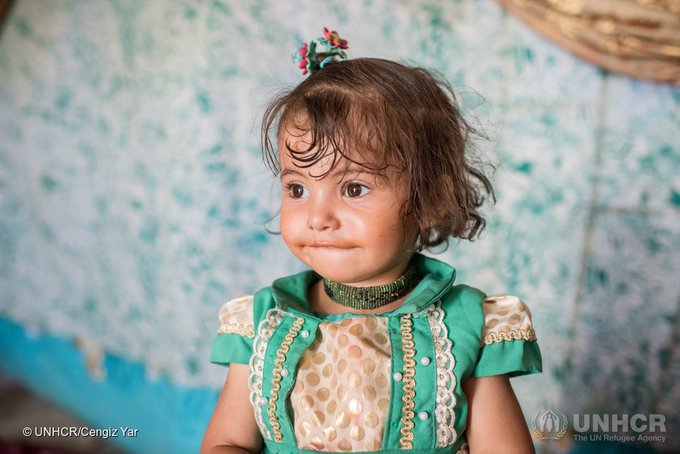 Amena, 10, wants to help build a better future for Iraq as an engineer. #DayOfTheGirl 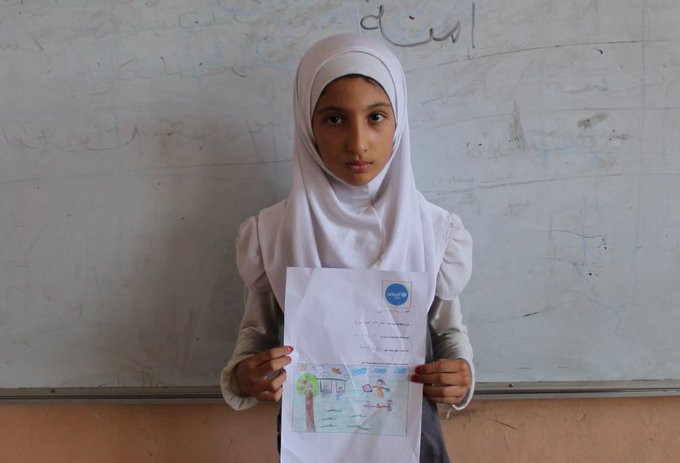 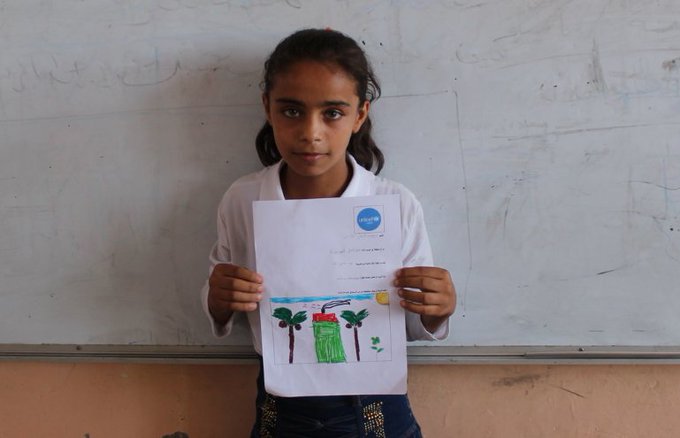 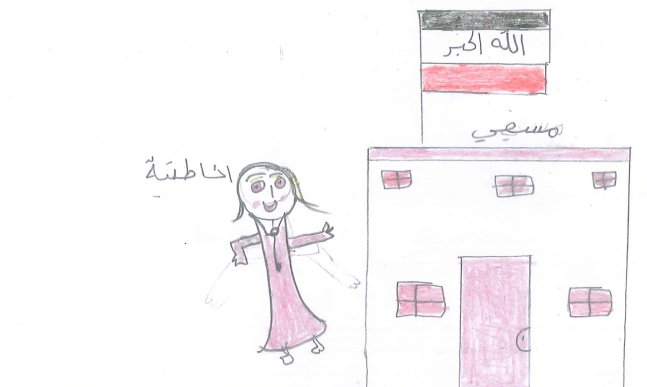 Hajer, 11, "wants war to end" so that she can fulfill her dream of becoming a doctor. #DayOfTheGirl 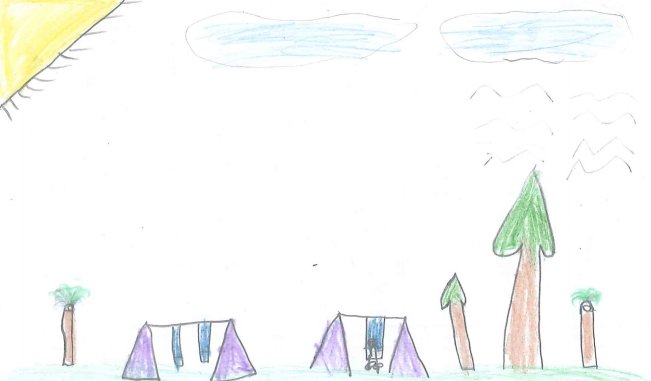 Check out Mosul Schoolgirls Twitter feed for many more drawings and photos.  So many brave girls, living in war, raised in war and the country that started it -- that would be us in the US -- can't even take a moment to acknowledge them.

Bless the girls of Iraq.  The reporters at US outlets?  Not so much.

Alex Burns, another piece of garbage working for NYT, found time to try to rehab War Criminal Bully Boy Bush's image yesterday but not to cover the girls of Iraq.

You know what?  No news outlet has more Iraqi blood on its hands than NYT.  They sold the illegal war, they lied to sell the war, they lied to keep it going.  And yet, all these years later, still having taken no accountability, they ignore the children of Iraq.  For someone that constantly tells you how awful Donald Trump is, they themselves are pretty damn awful as well.  Not to be outdone, Arwa Damon and CNN used this Day of the Girl to report on . . . an Iraqi boy.  That's pretty embarrassing and who would have thought the reporter who already had her own TMZ headline ("CNN Sued Over Correspondent Who Bit EMTS in Drunken Rage") could get more embarrassing?

The press loves to lie -- lives to lie?  They're juking all over themselves about a 'cease fire' that really isn't.  The militias in Iraq have not agreed to stop attacking US targets.  ALJAZEERA explains:

An array of Iran-backed Iraqi armed groups have agreed to suspend attacks on United States forces on condition Iraq’s government presents a timetable for a withdrawal of US troops, according to one of the groups.

“The factions have presented a conditional ceasefire,” Mohammed Mohi, spokesman for the Iran-backed Kataib Hezbollah group, said on Sunday.

“It includes all factions of the [anti-US] resistance, including those who have been targeting US forces,” he told the Reuters news agency.

Mohi said the Iraqi government must implement a parliamentary resolution in January that called for the withdrawal from Iraq of foreign troops.

If Iraq expels US forces, then the militia would stop attacking.  Of course, if all US forces left Iraq, the militias would have to stop attacking them because they wouldn't be there.  But never count on US media to have reasoning skills.  Remember, they're glorified general studies majors with no real training in anything at all.  And it shows -- it really, really shows.

On the topic of the militias, Hussain Abdul-Hussain (Kuwait's AL-RAI) writes:

Iraq’s top Shia cleric, Ayatollah Ali Sistani, last month called for the disbanding of all militias. This would involve the state disarming the pro-Iran Popular Mobilization Units (PMU). In turn, this would neuter Tehran’s most reliable partner in Iraq, Kataeb Hezbollah, the most dangerous alternative to state power in the country. Such then is the importance to the integrity of the Iraqi state of Sistani’s call. Indeed, the prime minister, now provided cover by the religious leadership in the Shia centre of Najaf, should act with haste. Yet, all we have witnessed thus far is an exhibition of inertia.

Kataeb Hezbollah – the Brigades of the Party of God, if you will – has been busy building a “statelet” within Iraq. If the government does not act quickly, Kataeb Hezbollah soon will become stronger than the Iraqi state itself; it will dominate Iraq in the manner in which its namesake, Hezbollah, does in Lebanon and seal Iraq’s slide into failure as a client state of Iran.