an e-mail from dwayne asked about tv and if there were any shows i'd watched once but would never watch again?

i watched it but it's so dull.  it isn't a great show.  i feel sorry for phil donahue because when marlo thomas has guests over, she'll sometimes screen episodes of 'that girl' (other times, she'll make guests watch a movie she was in).

'that girl' isn't funny.  and it's not a good show.  it's 1 of those bad comedies that's actually just whimsy because there was no studio audience so they could pretend it was funny - the way we do today with 'modern family' among others.

the show is utter crap.

i will allow that it was historic but it has not aged well.

other sitcoms?  they're funny.  'the mary tyler moore show' is hysterical.  any episode of 'maude' is funny.  same with 'bewitched.'

but 'that girl' is awful.  it doesn't help that, along with not being funny, ann marie doesn't have 1 female friend.  it's a queen bee sitcom and that's really what marlo became, isn't it?

she's done some good work elsewhere - she's amazing in the film 'in the spirit,' for example.

but 'that girl' is a waste of every thing.  if you don't believe me, i believe you can stream it free on amazon prime.


Oh, wait.  That's Chris Hayes.  Amy Goodman and her hideous DEMOCRACY NOW! didn't do s**t.  They never do.  And you're an idiot if you're still watching Goody Whore.

Chris Hayes, on MSNBC, did what Goody Whore didn't.

On ALL IN, Chris Hayes provided the journalism that Goody Whore refused to.

Chris Hayes: Today marks the 16th anniversary of the beginning of the Iraq War.  It is the single biggest tragedy of my political lifetime and an incredibly informative experience. I was 23-years-old when we set out to invade Iraq and I watched as, in an atmosphere of fear after 9-11, leaders manipulated the public to forge an incredibly robust, elite consensus that we had to undertake something that seemed to me and many at the time and seems ever more so now as indefensibly wrong.  But so many experts told us that we had to do it, that Saddam was a threat and that he had weapons of massive destruction And the Bush administration, more than any other single entity -- of course, used its power to manipulate and cherry pick intelligence to scare the public into war.  Of course, millions of people dissented and took to the streets -- I was among them -- and we were right and the so-called 'experts' and politicians and editorial boards and columnists?  They were all wrong.  The costs of that war was nearly 5,000 American service members' lives, trillions of dollars and the lives of hundreds of thousands of Iraqis, hundreds of thousands of fellow human beings, of men, women and children dead because of the events that our nation set in motion.  Prisoner tortured in Abu Ghraib, children shot dead in front of their parents in the city square by mercenaries.  And 16 years later, we still live with the consequences though not as much as Iraqis do.  And yet remarkably, with some notable exceptions, the many individuals responsible never really paid any kind of price for it -- reputationally, politically.  Influential people who advocated for the war and voted for it still have prominent positions.  Some have apologized and recanted, recognizing the error of their ways -- and that really does matter.  But the broader lesson here is when you don't really confront the past, you create conditions that lead to something like the current administration where Iraq War cheerleader and uber hawk John Bolton is advising the president -- he is the National Security Advisor and, as we speak, banging the drums of war against both Iran and Venezuela.  And unless we deal with this era -- the Trump era differently than we did the Bush administration, history will repeat itself again.  In fact, it sort of has already.


Amy Goodman did nothing.  That's sort of a slogan now, isn't it?  And it's a good thing when she does nothing because when she does something these days, it's destroying a country.

Danny Haiphong (BLACK AGENDA REPORT): "Since 2011, Amy Goodman has never strayed from the NATO line on countries such as Libya, Syria, and Russia. Like the corporate media, Goodman and her staff at Democracy Now! have provided positive coverage of so-called humanitarian groups like the White Helmets which have long been proven to work directly with NATO-armed jihadist mercenaries ravaging Syria ."

Is the independent media movement's flagship radio-TV show Democracy Now! pushing the State Department and Pentagon line on Libya instead of “going where the silence is” and telling the truth without fear or favor? Are its Libyan correspondents embedded with the US-backed Libyan rebels to such an extent that they have minimized and failed to follow up persistent reports of ethnic cleansing in Libya or investigate whether alleged “mercenaries” ever existed or Khadaffi's “massacres” ever took place?
Have Democracy Now's correspondents in Libya, Anjali Kamat and Sharif Abdel-Kodous minimized or avoided reporting upon the persecution of black Libyans and sub-Saharan African migrants in by US-backed Libyan rebels? Have they reported massacres that may not have happened, and mercenaries who might not have existed? Have they ignored or minimized the impact of US and NATO bombing and the presence of Saudi, Qatari and other foreign forces on the ground in Libya, also in support of the US-backed Libyan rebels? Have they simply embedded themselves with US-backed forces in Libya to pass the views of the Pentagon and State Department to us as “independent, unembedded news”?


We could go on and on and on.  Goody Whore rips off the American people the same way she rips off PACIFICA RADIO -- which should cancel her contract immediately and they can do so.  They can do it on the ground that she repeatedly breaks the rules (including on air self-promotion) and they can do it on the grounds that her show has lost journalistic merit.  They don't need DEMOCRACY NOW! but Amy needs PACIFICA is she's going to continue to live her elite lifestyle.  The money PACIFICA wastes on Amy -- thanks to that old whore Leslie Cagan -- has repeatedly left the radio network struggling to pay bills.  They don't even own the program or the archives.  It's time to kick Amy to the curb.


I have no comment on the exchange above except to note, as I said on the phone to a friend at CBS earlier, well at least this time we didn't have giggles and laughter in the background.

American Values‏ @Americas_Crimes 10h10 hours ago
On this day in 2003, the US committed the greatest crime of the 21st century thus far by invading Iraq. The war killed over 1 million people, displaced millions more, brought unknowable depths of suffering to the Iraqi people & gave birth to ISIS.

trashworld citizen  🌿‏ @ajdhenry 10h10 hours ago
happy sweet 16 to the iraq war. reminder that ppl like dubya now bc he gave a piece of candy to michelle obama (wife of another crook & war criminal). libs ate that up like slop from a trough bc aww what a cute meme on the teevee. eat it up, piggies. oink oink u f**kin sh**heads
2 replies81 retweets421 likes


Today marks 16 years since the United States invaded Iraq. I opposed it at the time and we are still dealing with its consequences. Our foreign policy must change.
1:29
61.1K views
163 replies1,074 retweets3,924 likes

Abby Martin‏Verified account @AbbyMartin 16h16 hours ago
The Iraq War woke me up to the horrific extent of US atrocities & cover-up by its corporate media machine. I remain stunned after so much carnage & destruction, the architects & agitators are heralded as intellectuals instead of shamed as war criminals. Empire rots from within
155 replies1,934 retweets4,519 likes

Hala Jaber‏Verified account @HalaJaber 17h17 hours ago
16 years ago we watched from the balcony of our hotel as the #US-led coalition began it's "shock an awe" invasion of #Iraq. Here are some photos taken the first nights of the bombing, by my late husband, photographer #SteveBent. 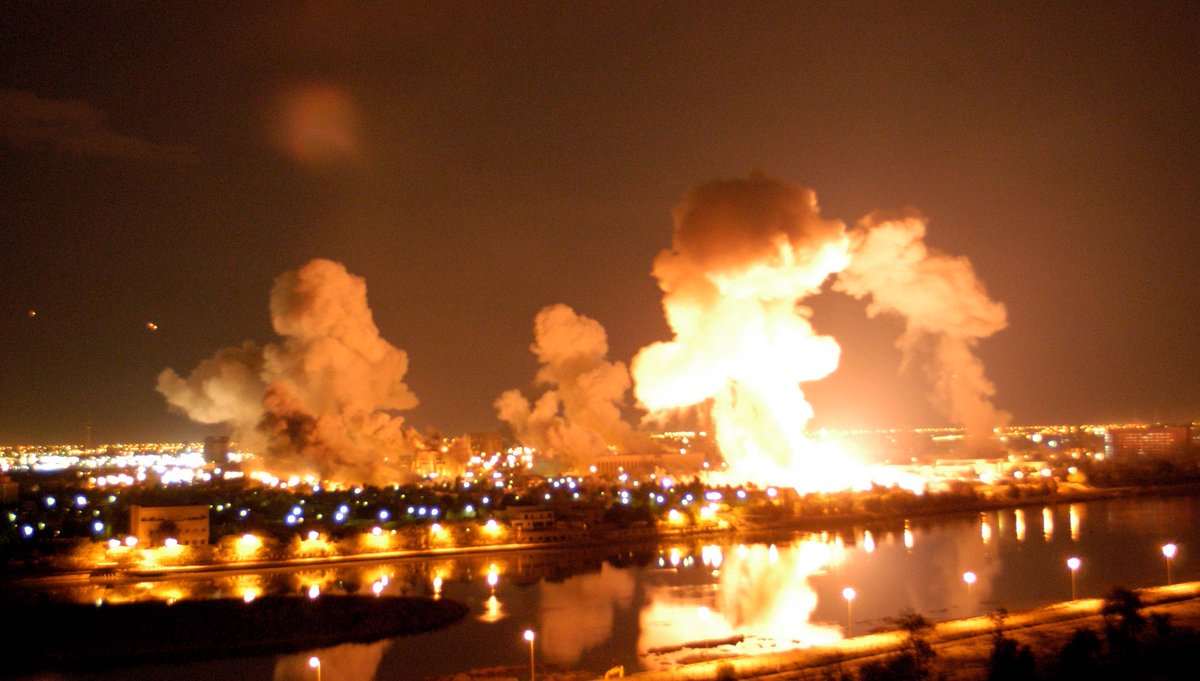 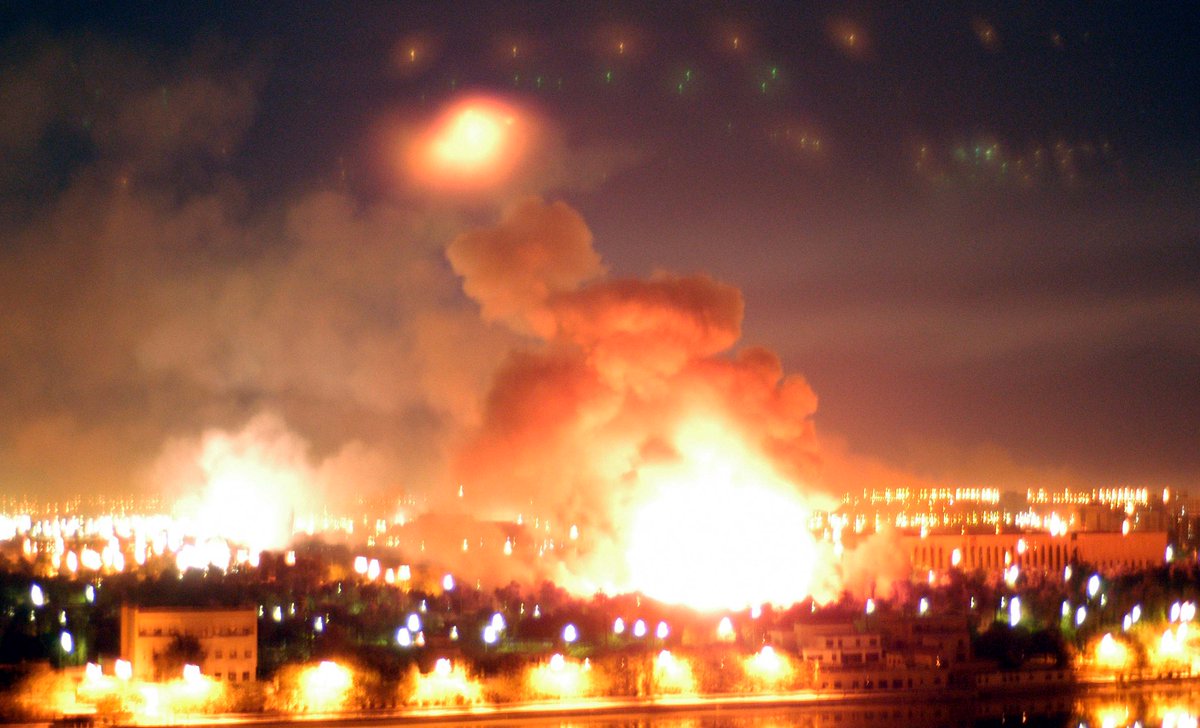 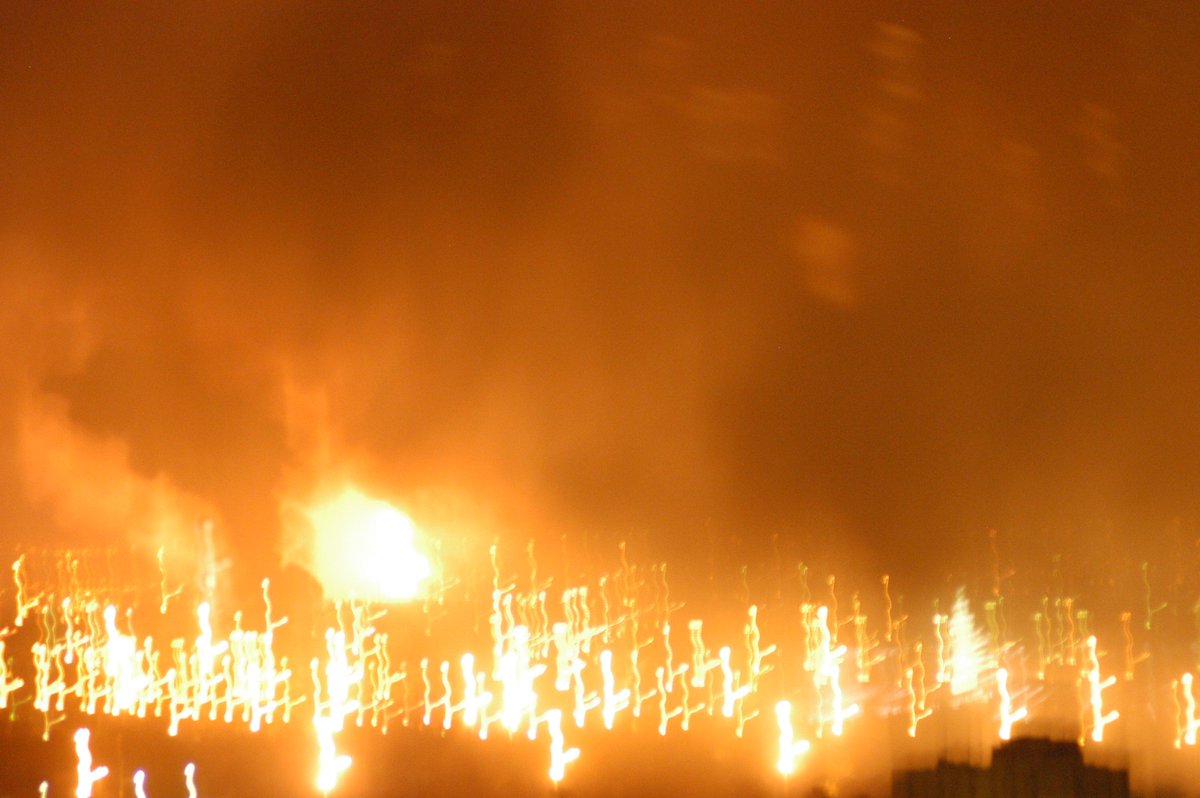 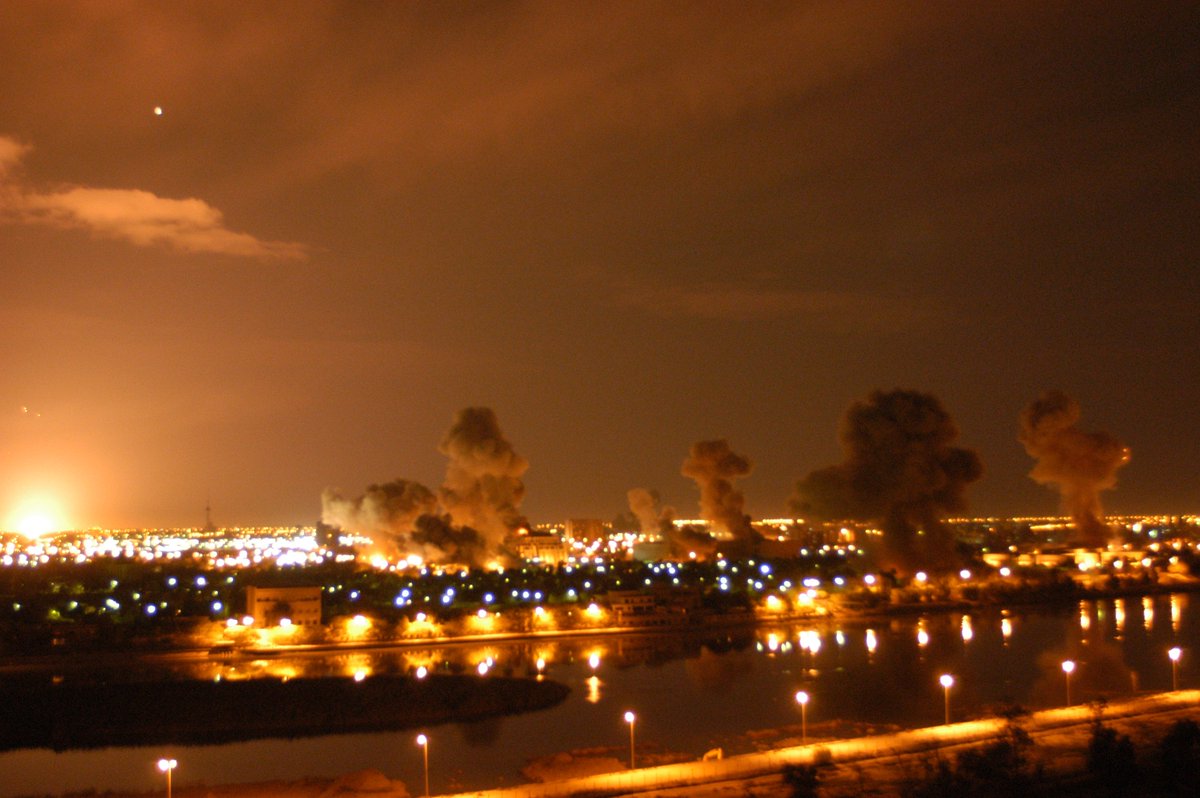 AJ+‏Verified account @ajplus 18h18 hours ago
Iraq’s humanitarian crisis is one of the biggest in the world. 8.2M people currently need humanitarian aid, says the UN. That includes 1.2M children below 5. - 2.4M are close to food insecurity - 2.3M don’t have regular water and sanitation - 2.6M children aren't in school 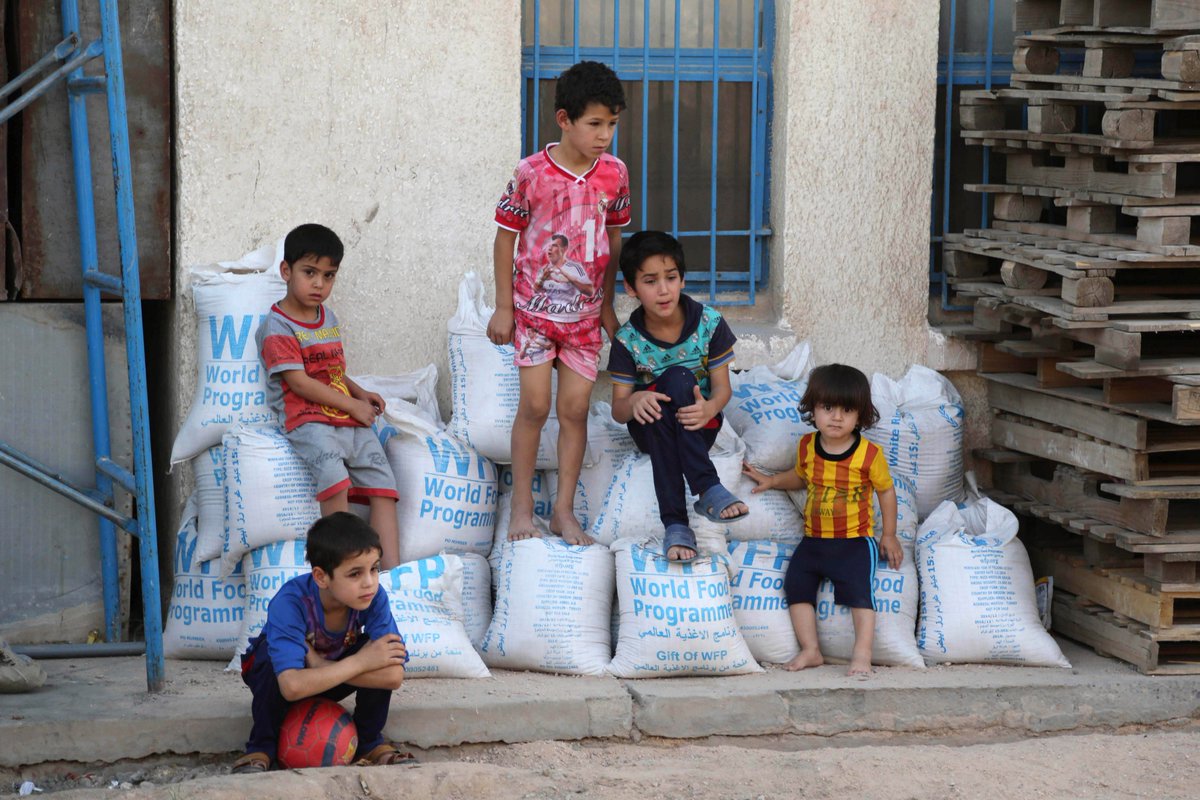 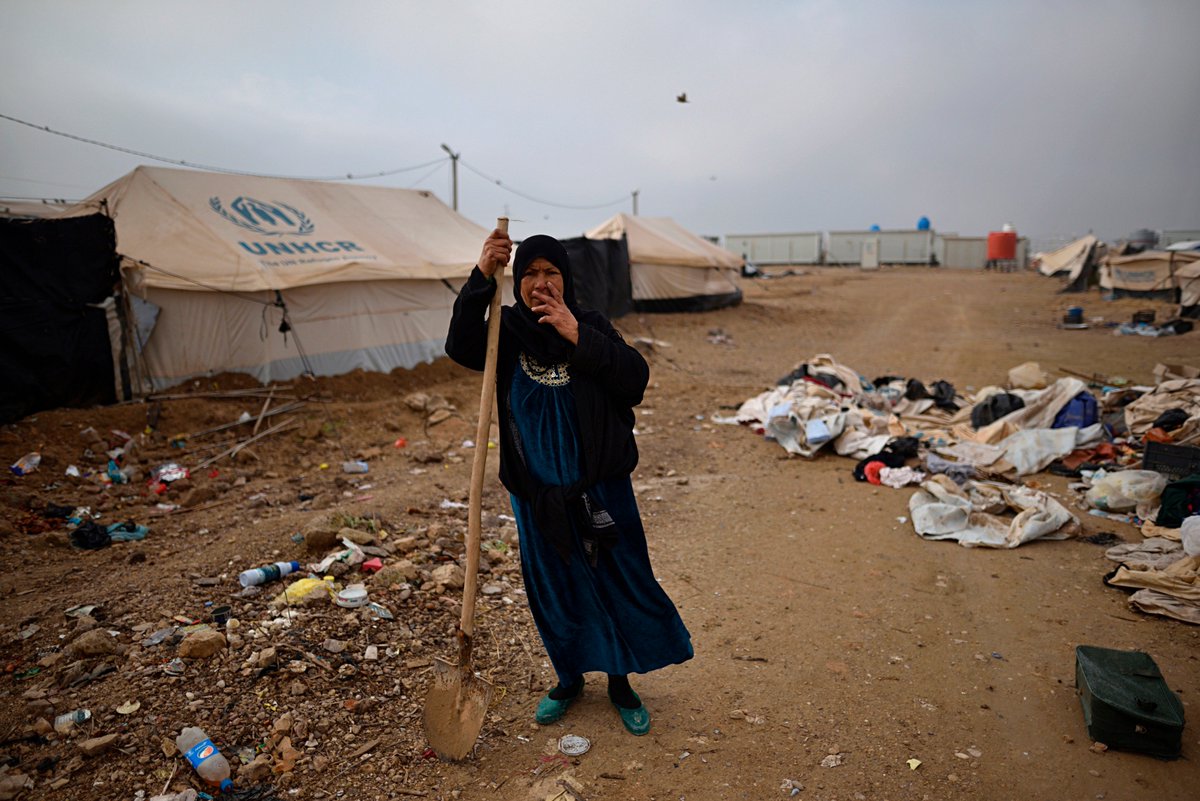 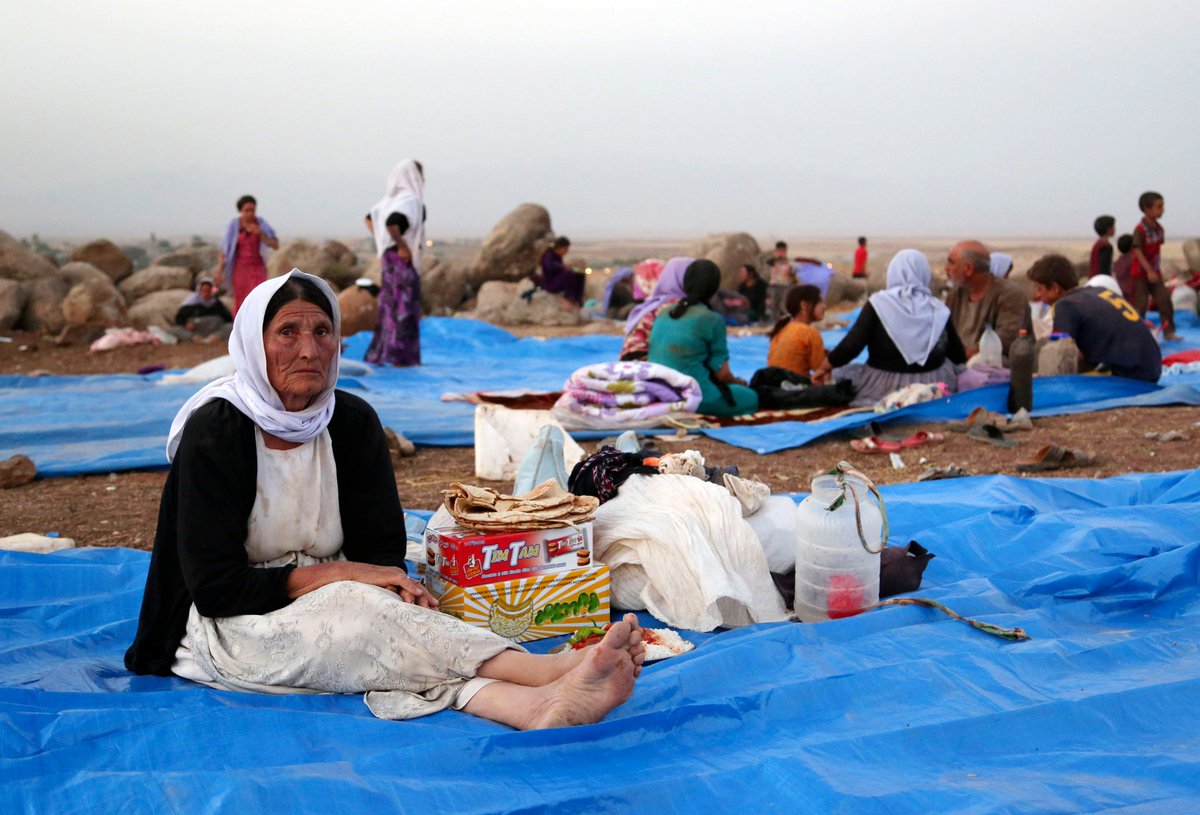 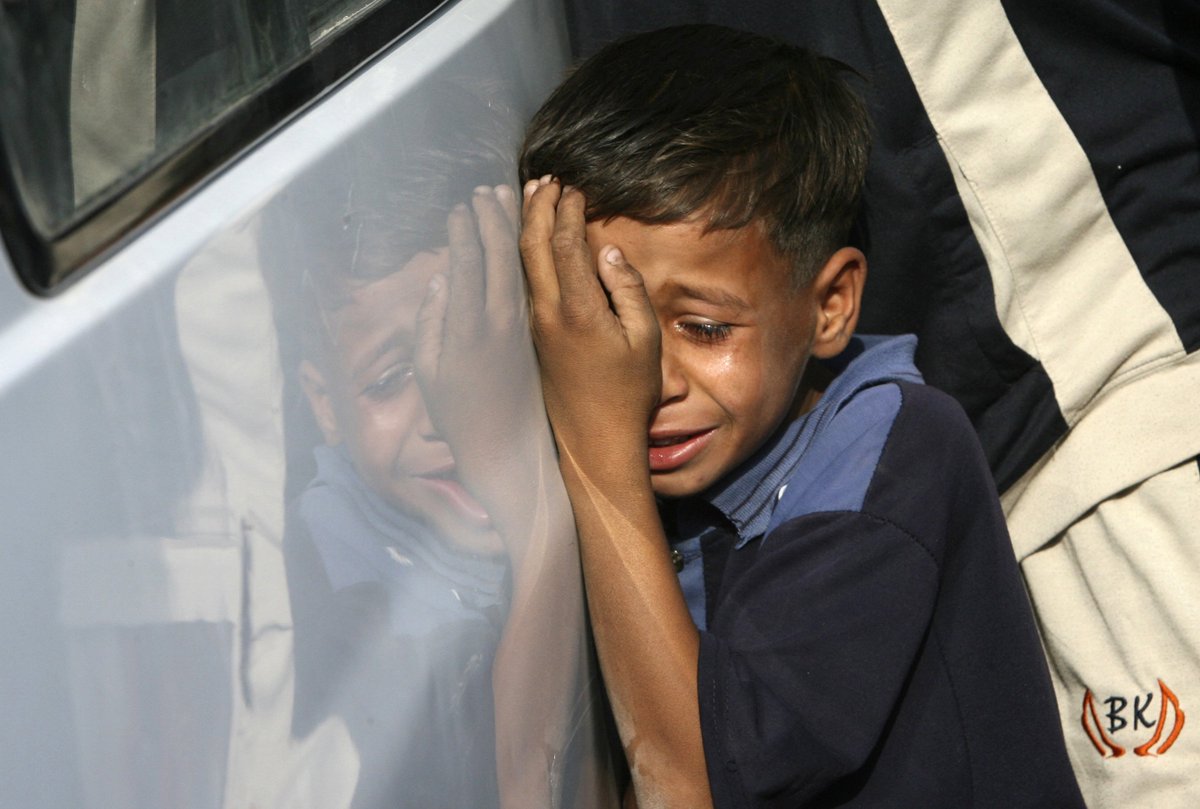 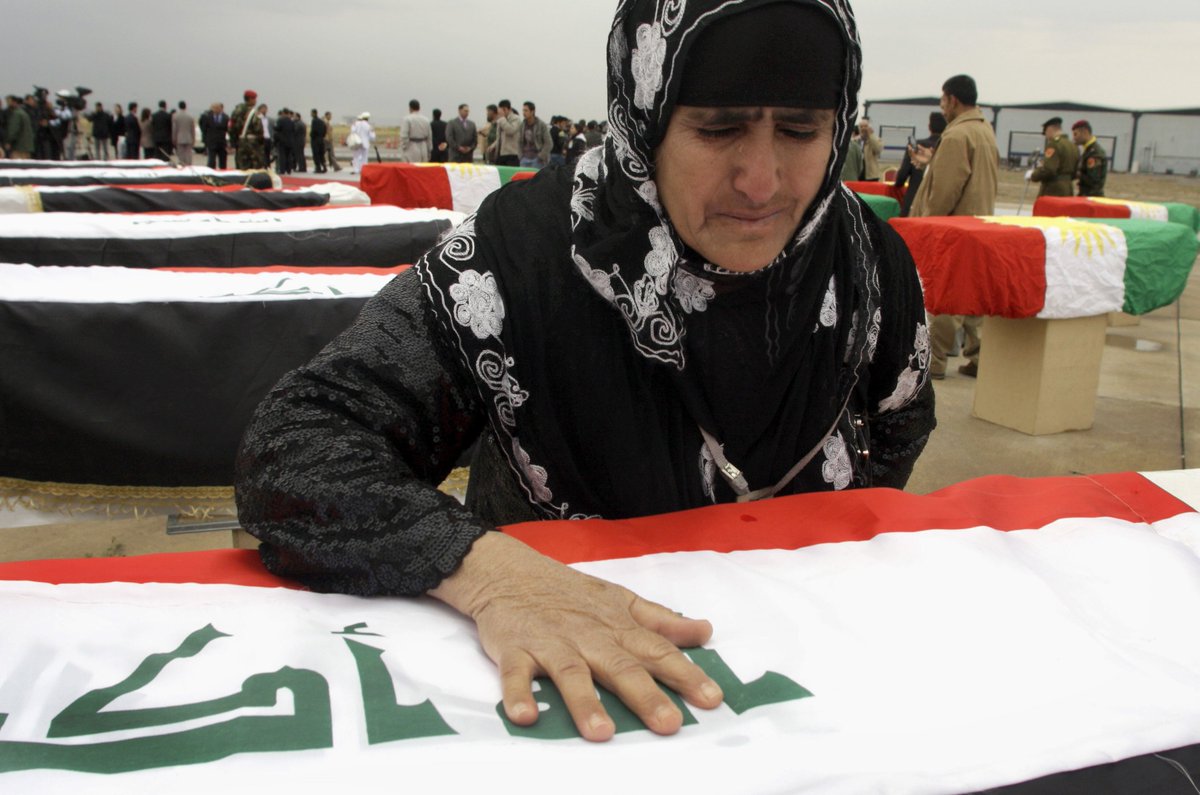 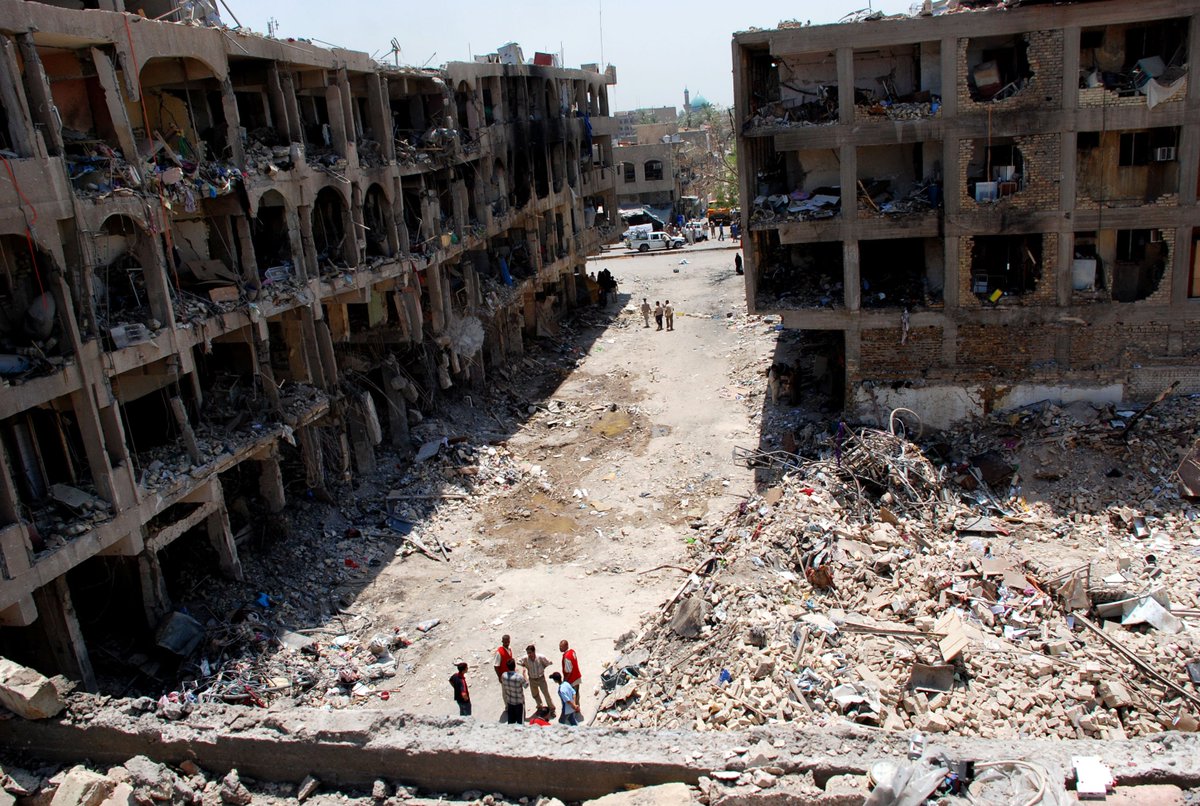 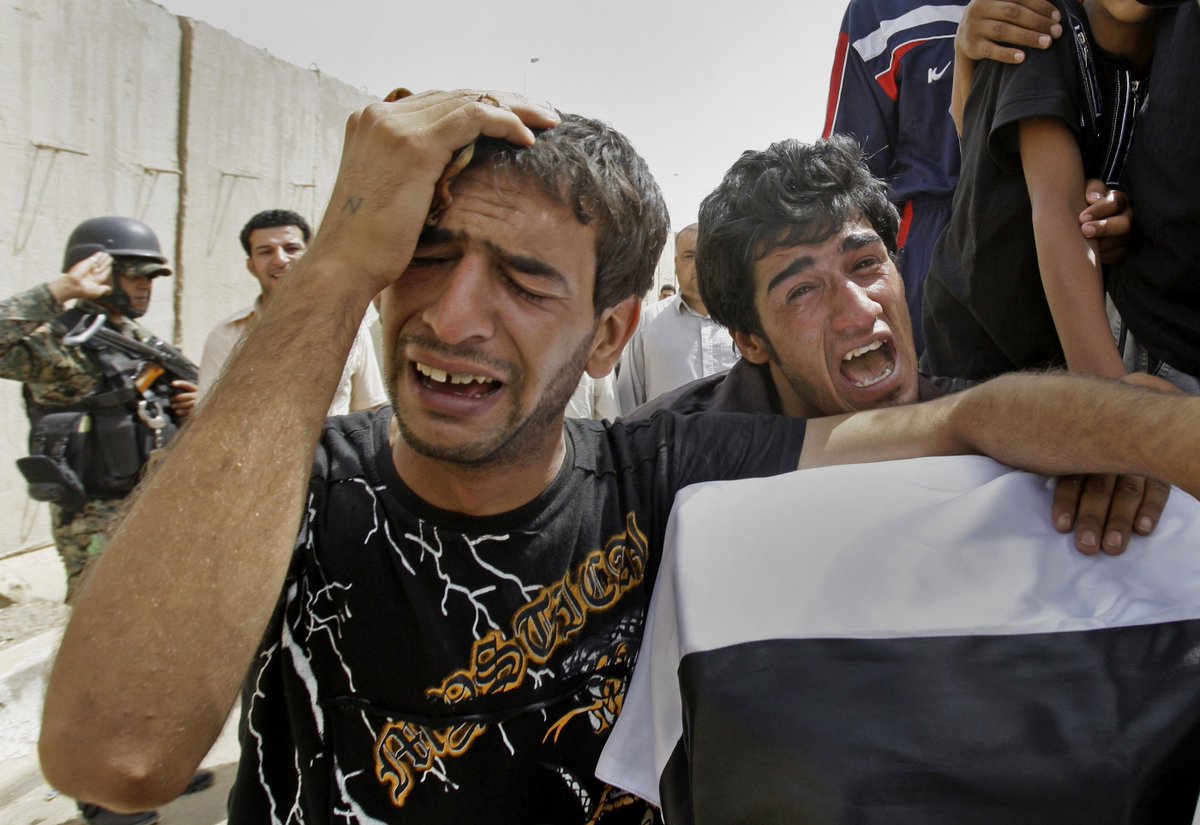 I voted against the war in Iraq. Sadly, much of what I feared in fact did happen. I don't want to see it happen again.
395 replies2,330 retweets8,559 likes

Today, on the 16th anniversary of the illegal Iraq war, which was based on lies and led to 100s of 1000s of deaths, it’s astonishing to see how many supporters of that war still have powerful positions in government and in the media, and how many have become stars of #resistance
151 replies2,208 retweets6,592 likes 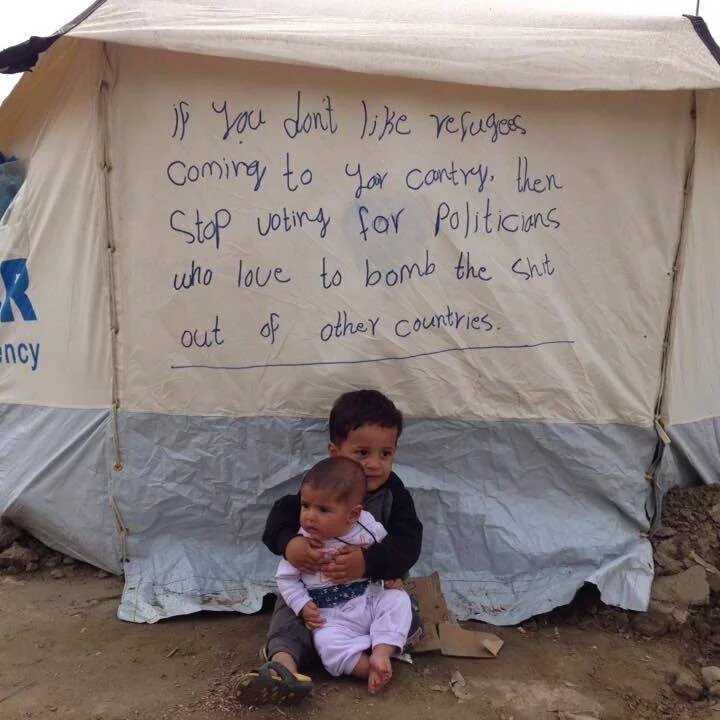 Red T Raccoon‏ @RedTRaccoon 20h20 hours ago
I'm an Iraq War Veteran who served 12 years ago. It should be over! Our country’s military has been in a permanent state of ever-expanding conflict for over seventeen years. Veterans call it the “Forever War.” Together, we can end it. #EndForeverWar commondefense.us/end-the-foreve… 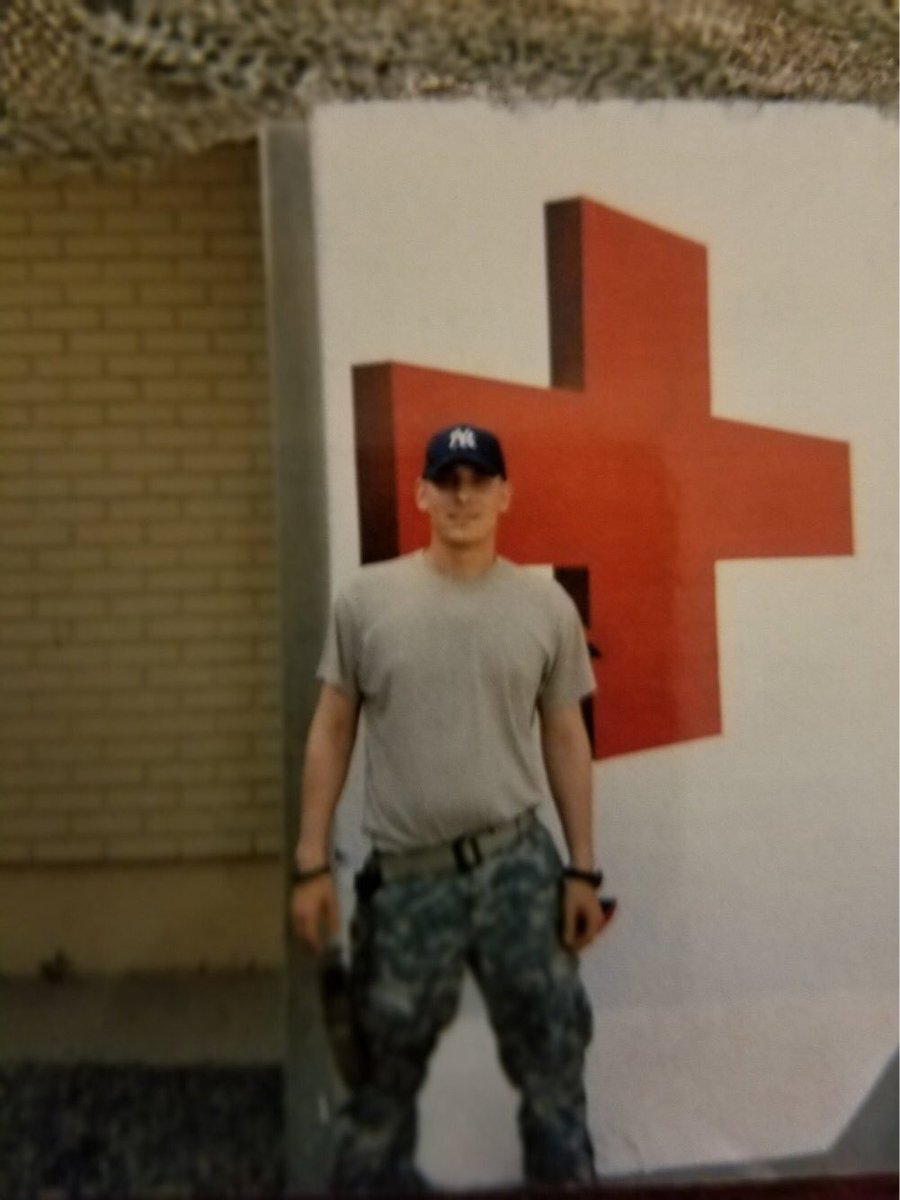 If you vote for the country to go to war, you should have to serve in the front lines in that war. I served in the U.S. Army, fiercely opposed the Vietnam War, helped end the draft. @JoeBiden never served and still saw fit to send this country's kids to Iraq
44 replies315 retweets1,532 likes