how they lie, how they look away

so will the debra messings object. 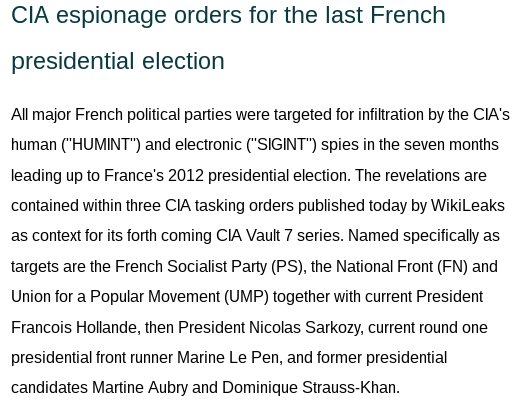 they're a lot like samantha bee - loud and ugly.


Friday, April 14, 2017.  Chaos and violence continue, The Mosul Slog continues, the US government continues to hand over everything to Iraq with no conditions and much more.


The whore of Babylon herself gives props to another world class liar.

Andrea Mithcell, now famous in syndication for calling a woman slut, is the woman who slept her way to the top of NBC, of course.  Dating and marrying Alan Greenspan ensured she'd be kept around while doing nothing.  (Don't try to find out details of her first marriage.  In her badly ghost written autobiography, Andrea disappeared her first husband and her step-children.)


POLITICO: "She's never faced off against a White House like this before."


Well maybe that's because she was happy to promote the lies of the Bully Boy Bush White House?

Ten years ago today, Colin Powell made the Bush administration’s case for going to war against Iraq. Much of what he said about Iraq’s threats to the United States was false. But the media coverage gave the opposite impression, and most of the pundits and journalists who promoted the justifications for the war paid no price for their failures.
As FAIR reported at the time, even before the Powell address there were reasons to be skeptical of the administration’s claims.  On February 4, 2003, FAIR published “Iraq’s Hidden Weapons: From Allegation to Fact,” which made the point that “it has not been demonstrated that Iraq continues to hold unconventional weapons.”  FAIR criticized coverage like that of the New York Times (2/2/03), which asserted that “nobody seriously expected Mr. Hussein to lead inspectors to his stash of illegal poisons or rockets, or to let his scientists tell all.”
As the FAIR release concluded:


The media convey to the public the impression that the alleged banned weapons on which the Bush administration rests its case for war are known to exist, and that the question is simply whether inspectors are skillful enough to find them.

Powell’s address was instrumental in pushing a faulty media line on Iraq’s WMDs further. That much was clear in the coverage right after his appearance at the United Nations, as FAIR documented on February 10 in “A Failure of Skepticism in Powell Coverage.”

In Andrea Mitchell‘s report on NBC Nightly News (2/5/03), Powell’s allegations became actual capabilities of the Iraqi military: “Powell played a tape of a Mirage jet retrofitted to spray simulated anthrax, and a model of Iraq’s unmanned drones, capable of spraying chemical or germ weapons within a radius of at least 550 miles.”

Dan Rather, introducing an interview with Powell (60 Minutes II, 2/5/03), shifted from reporting allegations to describing allegations as facts: “Holding a vial of anthrax-like powder, Powell said Saddam might have tens of thousands of liters of anthrax. He showed how Iraqi jets could spray that anthrax and how mobile laboratories are being used to concoct new weapons.” The anthrax supply is appropriately attributed as a claim by Powell, but the mobile laboratories were something that Powell “showed” to be actually operating.


We included Dan Rather above because 'the resistance' has mistaken him for a truth teller.   He's about as real as Robert Redford's toupee.

Also don't forget that Andrea was involved in the whole attack on former US Ambassador Joe Wilson for calling out Bully Boy Bush's yellow cake lies.  Andrea's own statements even attempted to mitigate the exposure of Joe's wife (and downplay the actions of Scooter Libby).


There's nothing honest about Andrea.  Not her nose job, not the fillers in the cheeks, not that 'blond' hair and certainly not anything the 'journalist' offers on air.

No wonder Jane Arraf would be attracted to her.

Jane covered for thug Nouri al-Maliki -- covered for, not covered -- when he was prime minister.  She did the same for Saddam Hussein.  CNN's policy was to do anything to keep their reporters on the ground in the country (as Eason Jordan revealed in his now infamous NEW YORK TIMES column).  Jane parted ways with CNN but she internalized the policy.

Her cover ups were most disgusting when it came to the rape of Sunni women and girls in jails and prison.  For months, she ignored the story.  Even when Parliament was investigating, she ignored the story.  When she finally 'stumbled' upon it, it was when Amnesty International issued a report.  And, in noting it, she managed to only quote men -- not a single woman or girl.  They were the victims but she was attempting to dumb down and white wash what had happened so she didn't quote the actual victims.


Using satellite imagery and local researches, the most recent evaluation confirms that western Mosul has undergone extensive destruction, “far greater than in the east,” according to a senior United Nations aid official in the country.
“The level of damage in western Mosul is already far greater than in the east, even before the battle to retake the Old City begins,” said Lise Grande, Humanitarian Coordinator for Iraq, in a news release issued by the UN Office for the Coordination of Humanitarian Affairs (OCHA).
With more than 1,140 housing sites having been destroyed across the city, the UN Human Settlements Programme (UN-Habitat) confirms that damage to houses in western Mosul is two and a half times greater than in the eastern districts with one-third of the residential devastation reported to have occurred in the Al Jadeda neighbourhood.
Ms. Grande pointed out that nearly 300,000 civilians have already fled western Mosul and “hundreds of thousands more may in the days and weeks ahead.”
She stressed that homes are being destroyed, schools and health centres damaged and that crucial public infrastructure, including electricity and water stations, are in ruins.
“Under international humanitarian law, parties to the conflict are obliged to do everything possible to protect civilians and limit damage to civilian infrastructure. Nothing is more important,” concluded the Humanitarian Coordinator.


And elsewhere in Iraq?

IraqiSpringMC‏ @IraqiSMCEn  17m17 minutes ago
Maysan: A body of unidentified old man stabbed has been found in Huseein Al-Qadeem neighborhood in the middle of Emara.
0 replies0 retweets0 likes

IraqiSpringMC‏ @IraqiSMCEn  19m19 minutes ago
Baghdad: A body of unidentified man has been found in tajiyat area north of Baghdad.
0 replies0 retweets0 likes

IraqiSpringMC‏ @IraqiSMCEn  19m19 minutes ago
Baghdad: A person was killed and "5"were wounded as an IED exploded in Ma'lif area south of Baghdad.
0 replies0 retweets1 like

IraqiSpringMC‏ @IraqiSMCEn  20m20 minutes ago
Basra: A body of unidentified man has been found at Ashar River in the middle of Basra.
0 replies0 retweets0 likes

IraqiSpringMC‏ @IraqiSMCEn  5h5 hours ago
Anbar: An IED has hit a patrol in the middle of Heet ,further details unknown.
0 replies0 retweets0 likes

IraqiSpringMC‏ @IraqiSMCEn  5h5 hours ago
Nineveh: News agencies:The "Islamic State" has retaken some areas from the government forces at the suburbs of... fb.me/1khQ4Na7c
0 replies0 retweets0 likes

All the violence is horrible, no question.

But when bodies start surfacing in neighborhoods, it's usually a sign that the violence is about to intensify.  That has been the pattern.

One of the biggest supporters of the Mosul operation -- and of Iraqi forces including the militias -- has been Haidar Sumeri.

Haidar Sumeri‏ @IraqiSecurity  1h1 hour ago
We told you & told you again. "Al-Qaeda is on our side in #Syria." - email from policy advisor to Sec. of State Hillary Clinton (Feb 2012). 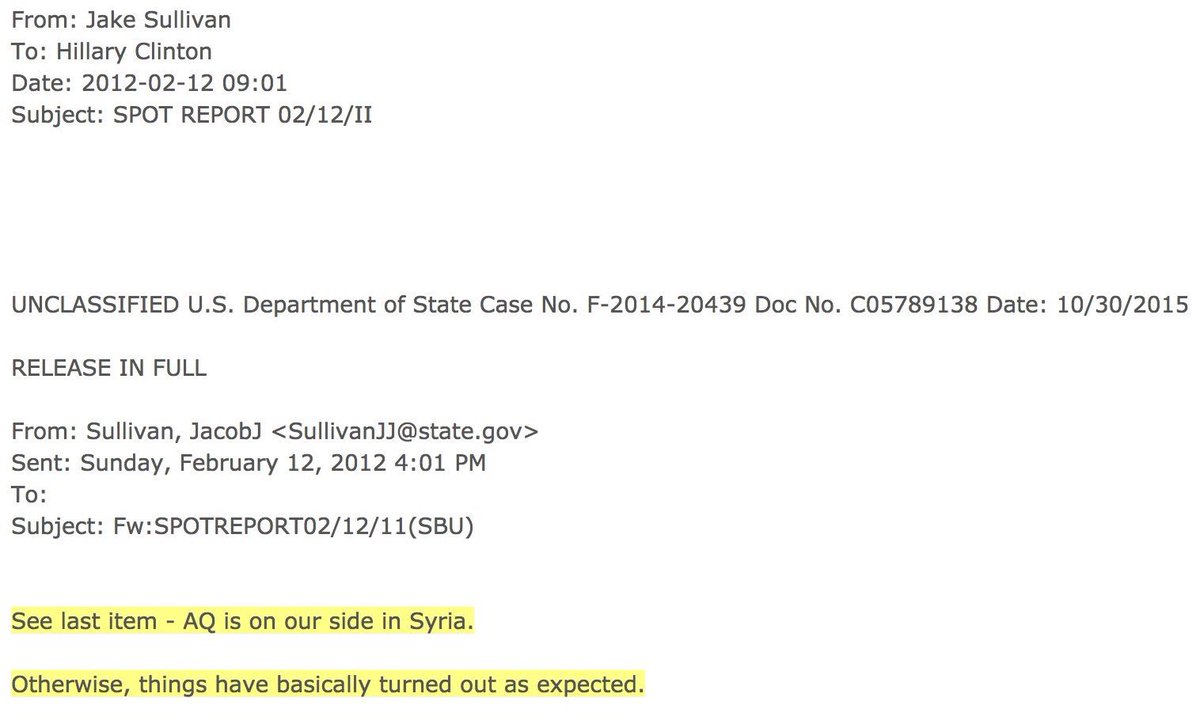 Hillary worked with al Qaeda when it suited her.

Vice President and former prime minister Nouri al-Maliki is tipped for the presidency of Iraq’s largest political group as the tenure of its incumbent leader nears its end.
Maliki is a candidate for the presidency of the Iraqi National Alliance, according to press statements by Rasoul Radi, an MP from the State of the Law, the parliamentary bloc headed by Maliki.
The alliance’s chairman, Ammar al-Hakim, is scheduled to end his tenure early August, and has recently called for starting measures to select his successor. The alliance’s member parties agreed to take a candidate’s party’s share of parliament seats into consideration when making the selection.

The Iraqi National Alliance is Iraq’s largest Shia political coalition, and was founded in 2009 by former PM and current foreign minister Ibrahim al-Jaafari.

Nouri back in charge?


That would be a nightmare.

If only the US government had some pull and was able to make the long promised reconciliation in Iraq take place -- even just legally.

Oh wait, there is.

WASHINGTON, Apr. 12, 2017 - The State Department has made a determination approving a possible Foreign Military Sale to the Republic of Iraq for pilot and maintenance training, contractor logistical support (CLS) for trainer aircraft, and base support. The estimated cost is $1.06 billion. The Defense Security Cooperation Agency delivered the required certification notifying Congress of this possible sale on April 11, 2017.
The Government of Iraq has requested a possible sale of pilot training; maintenance training; and contractor logistical services support for C-172, C-208, and T-6 aircraft for up to five (5) years to include contractor aircraft modification; repair and spare parts; publications; aircraft ferry; and miscellaneous parts, along with training base operation support, base life support, security, construction, and other related elements of program support. The estimated total program value is $1.06 billion.
The proposed sale will contribute to the foreign policy and national security of the United States by helping to provide for a stable, sovereign, and democratic Iraq, capable of combating terrorism and protecting its people and sovereignty. Iraq currently owns twelve (12) C-172, five (5) C-208, and fifteen (15) T-6 training aircraft. The training pipeline will allow the Iraqi Air Force to tailor pilot training for several U.S.-origin operational aircraft. The C-172s and T-6s are Iraq’s training platforms for their mobility and fighter attack fleets. The C-208s are Iraq’s platform of choice for training its Intelligence, Surveillance, and Reconnaissance (ISR) pilots.
The proposed sale of training and support services will improve the Iraq’s ability to train its pilots and maintenance technicians. By training its own pilots and maintenance technicians in-country, Iraq will decrease its overseas training requirements, significantly reduce its training costs, and will enhance its ability to take over the sustainment of its aircraft. Iraq will have no difficulty absorbing this support. In addition to its primary mission – pilot and maintenance training for Iraqi Air Force personnel – this proposed sale includes Contractor Logistical Support costs for the trainer aircraft, as well as possible future construction and base operation support costs.
The proposed sale of this training and support will not alter the basic military balance in the region.
The principal contractor is Spartan College, Tulsa, OK. At this time, there are no known offset agreements proposed in connection with this potential sale.
Implementation of this proposed sale will require the assignment of approximately four U.S. Government representatives and 50-55 contractor representatives to Iraq.
There will be no adverse impact on U.S. defense readiness as a result of this proposed sale. All training and support listed on this transmittal are authorized for release and export to the Government of Iraq.
This notice of a potential sale is required by law and does not mean the sale has been concluded.

All questions regarding this proposed Foreign Military Sale should be directed to the State Department's Bureau of Political Military Affairs, Office of Congressional and Public Affairs, pm-cpa@state.gov.

Bully Boy Bush got the Iraqi government to promise -- in writing -- that they would proceed with reconciliation.

Donald Trump will now become the third idiot who hands over weapons Iraqis want without putting conditions on their handover.