if you haven't already heard, actress and singer diahann carroll has passed away.  i noted diahann here many times because of 'dynasty.'

diahann achieved a lot of 1sts in her lifetime but there's  1 the media is ignoring: 1st u.s. african-american with her own barbie doll.

The Wing‏ @_thewing_ 6h6 hours ago
WOMEN-CRUSHING-IT-WEDNESDAY In 1968, Diahann Carroll became the first black woman to be the star of an American television show without having to play a maid or any other stereotypical role. Her performance in Julia earned her a Golden Globe for best female TV star in 1969!

she was an amazing woman.

and her death really depressed the hell out of me.

i turned on the t.v. and there was nothing to watch.  suddenly, i thought of david boreanaz and his cbs show 'seal team' that i've never watched.  so i streamed this week's episode.

there it was - that juicy butt.  boreanaz got a big 'ol butt.  'bones' was worth watching just to catch the jiggle of his back porch.  that butt's gotten even more shapely.

david really does have the best male ass on t.v.

so i'll miss diahann greatly.  but i'll grip tightly to the butt of david boreanaz for comfort and joy.

Friday, October 4, 2019.  Protests continue in Iraq while, in the US, Joe Biden continues to tarnish the legacy of Barack Obama.

DAVID GREENE, HOST:
The impeachment inquiry into President Donald Trump is drawing attention to the questionable activities of more than one major political family. Former Vice President Joe Biden and his son Hunter are under scrutiny for Hunter's work in the Ukrainian energy industry.
The writer Sarah Chayes is the author of the book "Thieves Of The State: Why Corruption Threatens Global Security" (ph). And she argues this scrutiny is a good thing.

SARAH CHAYES: You know, when the son of a vice president gets a job in a field he knows nothing about while his father is vice president in a country that just had a revolution that, you know, typically, in that part of the world, post-revolution, all the oligarchs steal all the crown jewels, and the industry is one of the crown jewels - that is to say, gas - since when is that doing nothing wrong?

GREENE: Now, wrong does not necessarily mean illegal, Sarah Chayes told me. But she said too often these days, people with political ties or prominent political names are getting involved where they shouldn't be.

CHAYES: Almost any senior name that I start researching, I run into practices like this. It is extraordinarily widespread. And that's my question. How did we all convince ourselves that this isn't corrupt? And it seems to me that we're not going to recover, you know, even an approximation of the ideals on which we were founded as a nation unless each of us, as citizens, begins to make it less comfortable for our political and economic leaders to behave this way.

GREENE: Well, let me ask you this, then. If it is not unusual, why focus on this case of Hunter Biden and Joe Biden specifically?


CHAYES: Because it's in the news and because of the word that I kept seeing apply in this context, which is, no wrongdoing, or, they didn't do anything wrong. And I'm looking at that, saying, what? And if we can say that now, in this context, then there's something awry.


From her article at THE ATLANTIC:

When allegations of ethical lapses or wrongdoing surface against people on one side of the aisle, they can always claim that someone on the other side has done far worse. But taken together, all of these examples have contributed to a toxic norm. Joe Biden is the man who, as a senator, walked out of a dinner with Afghan President Hamid Karzai. Biden was one of the most vocal champions of anticorruption efforts in the Obama administration. So when this same Biden takes his son with him to China aboard Air Force Two, and within days Hunter joins the board of an investment advisory firm with stakes in China, it does not matter what father and son discussed. Joe Biden has enabled this brand of practice, made it bipartisan orthodoxy. And the ethical standard in these cases—people’s basic understanding of right and wrong—becomes whatever federal law allows. Which is a lot.


To quote THELMA & LOUISE, "You get what you settle for."  Is that what we're willing to settle for as a society?  Corruption and lack of ethics?  Or do we have standards that we apply across the board?  Basic expectations from our public servants?

L. R Wiesman‏ @cowboylw2 1m1 minute ago
Replying to @charliekirk11
Or is it this maybe?? Because let’s face it: Joe Biden’s son Hunter failed rehab 5 times, got kicked out of the Navy, dated his sister in law, and left a crack pipe in a rental car. The idea Hunter got a job getting paid $50,000 a month should strike everyone as suspicious.
0 replies0 retweets0 likes

That gets back to the Biden pass.  His niece Caroline physically attacks a police officer and is arrested.  She gets a pass, no time.  A few years later, the niece steals over $100,000 and, again, no time sentenced, no time served.  Hunter and his crack pipe?

America deserves much better than that.


And what the media and the Joe-bots don't get, the American people do.  MEDIAITE notes:


Joe Biden’s third quarter fundraising numbers are out. And they are an ominous sign for the former vice president’s 2020 candidacy.
According to Bloomberg, Biden told donors at a fundraiser in Palo Alto, CA that his campaign raised $15 million in the period from July-September. That number is down markedly from the $21.5 million he brought in during the second quarter.
Biden’s third quarter haul also, notably, lags behind that of two of his rivals. Sen. Bernie Sanders (I-VT) brought in $25 million over the past three months, while South Bend, IN Mayor Pete Buttigieg raised $19.1 million. Sen. Elizabeth Warren (D-MA), who has emerged as the main threat to Biden’s long-held frontrunner status, has not yet reported her third quarter numbers.
The vice president also came in way behind President Donald Trump — whose coffers grew by a whopping $125 million in the third quarter.

It's no longer just about him.

Corrupt Joe makes it that much harder to call Donald Trump out for any corruption.

Corrupt Joe is tainting Barack Obama's legacy with every day.

What Joe allowed his family to get away with while he was Vice President?

That reflects poorly on Joe.  It also reflects on Barack.  And there's a lot more to come on that issue.  Joe is harming Barack's legacy.

It's time for Joe to go.

He offers nothing that is needed and seems to believe it's 1996.  He's out of touch, he's out of date and he's corrupt.  He needs to go.

The death toll from days of violent demonstrations across Iraq has risen to 44 as unrest rapidly spread across the country despite a plea for calm from the prime minister.
In an overnight TV address, Adel Abdul-Mahdi said he understood the frustration of the public but there was no “magic solution” to Iraq’s problems. He pledged to make reforms, but this drew a scornful response from demonstrators.

REUTERS plays 'even handed' and head up the ass.  Why?  Maybe so they can continue to cover Iraq.  It's not like the western press isn't intimidated and bullied by the Iraqi government. 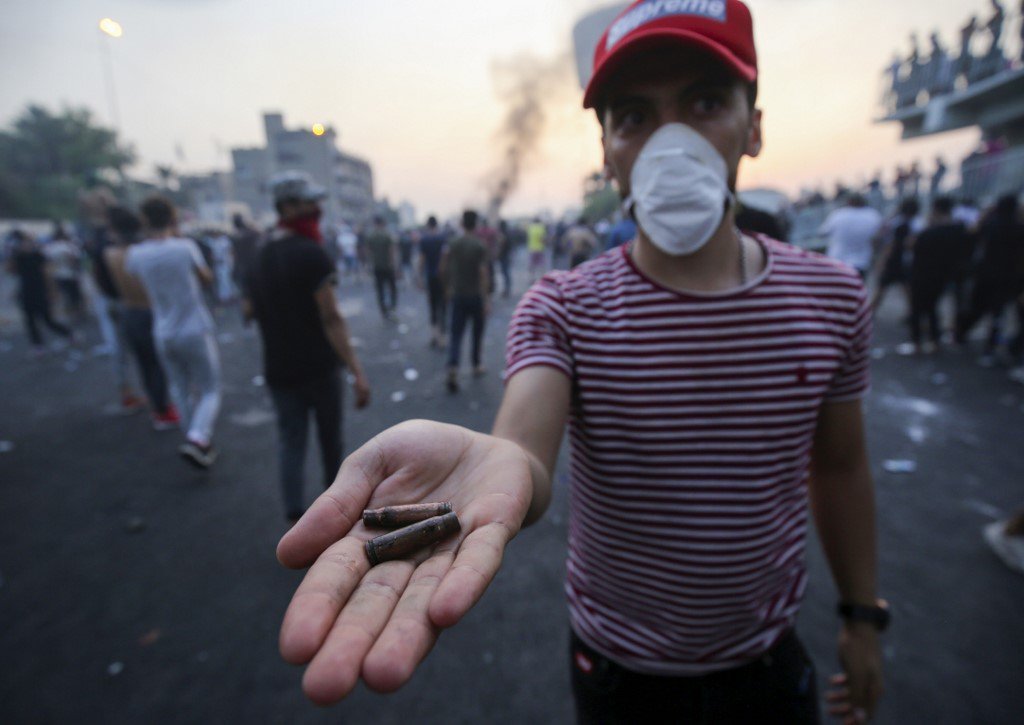 
Mahdi is so inept as a prime minister that the president of Iraq has dominated the news for over six months.  The presidency is a symbolic office in Iraq.  It has no real power, pure ceremony.  But that's how weak Mahdi is and how desperate the western press has been to ignore reality in Iraq.

A non-functioning prime minister?  Well, hey, just report on the doings of the president and pretend like he's the leader of the country.

#Breaking: In his first comment on #Iraq_Protest, The senior cleric in #Iraq Ali #Sistani sharply criticizes the political process in #Iraq & he accuse the "Sadrist" & "Fatah" blocs who formed the govt, to abandon slogans of reform that they claim it. (1) 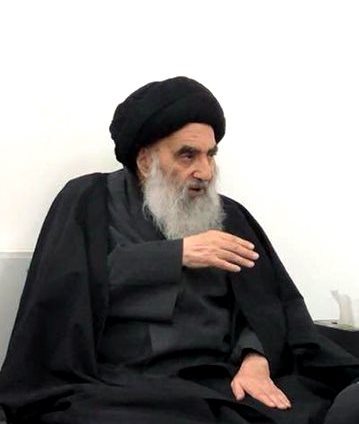 A few moments ago, his spokesman Ahmed al-Safi read out Sistani's statement on the situation in #Iraq:- All the three authorities in the country, Parliament, government & judiciary, responsibility for the poor conditions of Iraqis (2)
1 reply7 retweets12 likes

IMPORTANT: Sistani gives proposal:- “Before its too late, I call to form committee, its members are independent & technocrats that get the demonstration trust, the committee have the right to access to all government documents to uncover proplems away from bureaucracy” (5)
4:26 AM - 4 Oct 2019
2 replies7 retweets4 likes

And here are some Tweets about the ongoing protests.

The unrest in Iraq is escalating. Protests continue despite a curfew, an internet blackout & security forces using live ammunition. Reports of shooting at Baghdad airport now. The toll has risen to 31 dead in 3 days, according to AP.
13 replies393 retweets305 likes

Ali Al-Saffar‏ @alialsaffar 22h22 hours ago
A word on one of the dynamics behind the Iraq protests, namely: youth unemployment. In Iraq, 40% of the country is under 14, and 60% is under 25. Youth unemployment is around 40%. Changing demographics should keep policymakers up at night across the region. 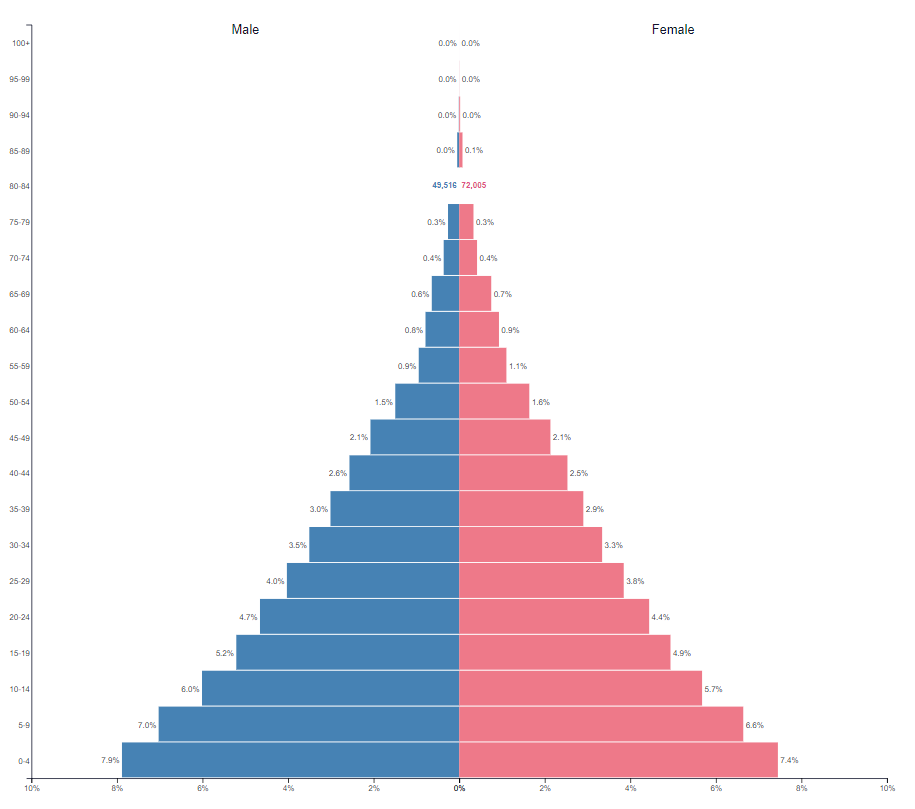 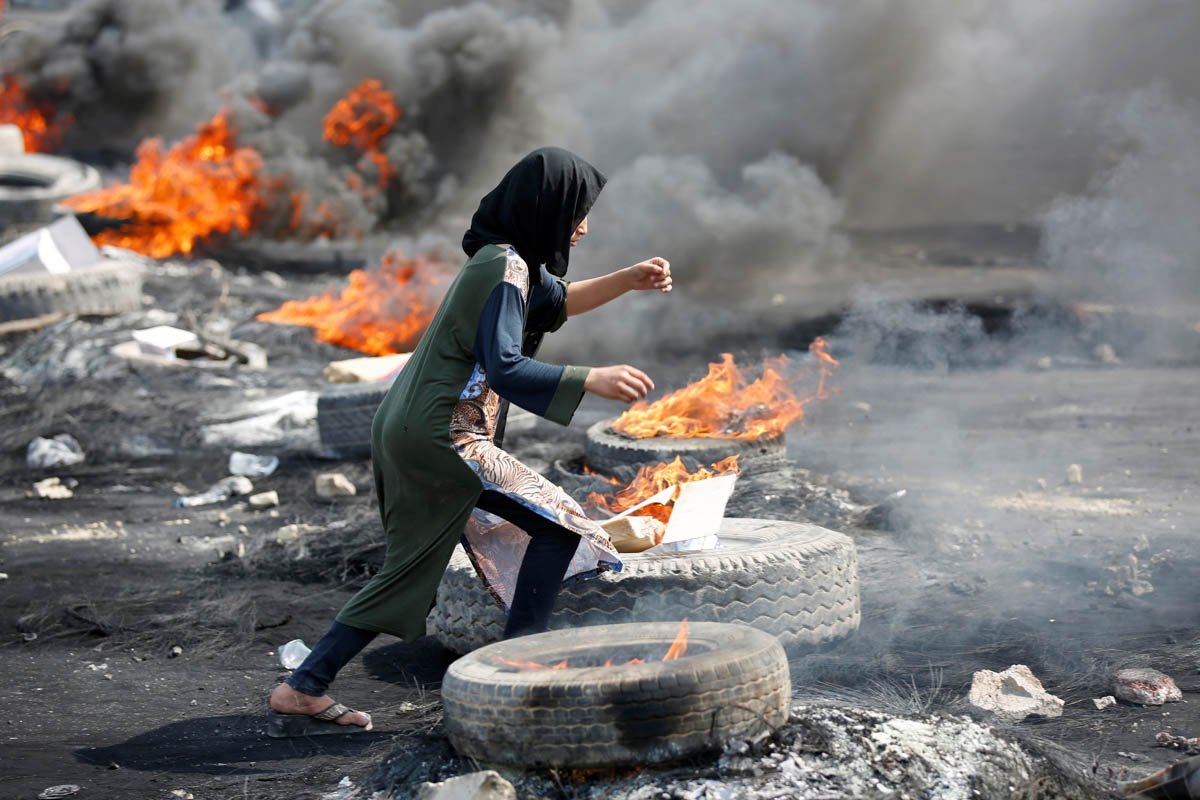 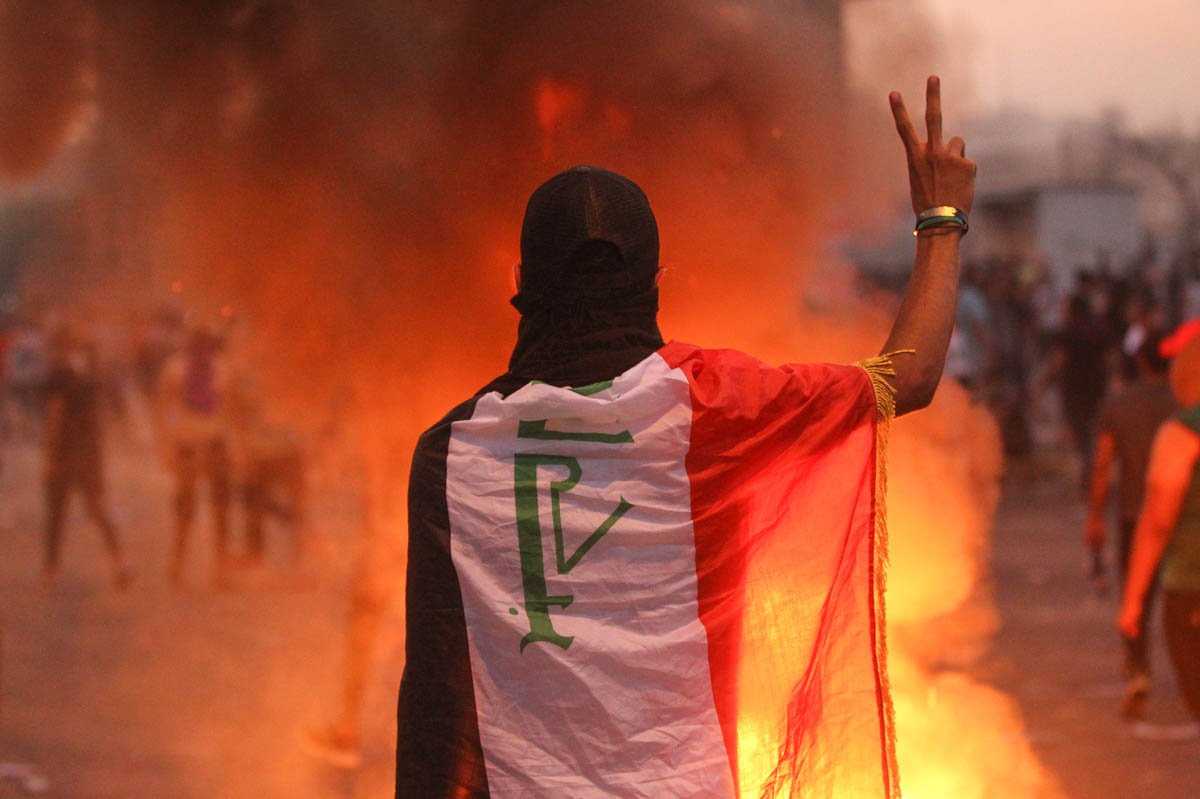 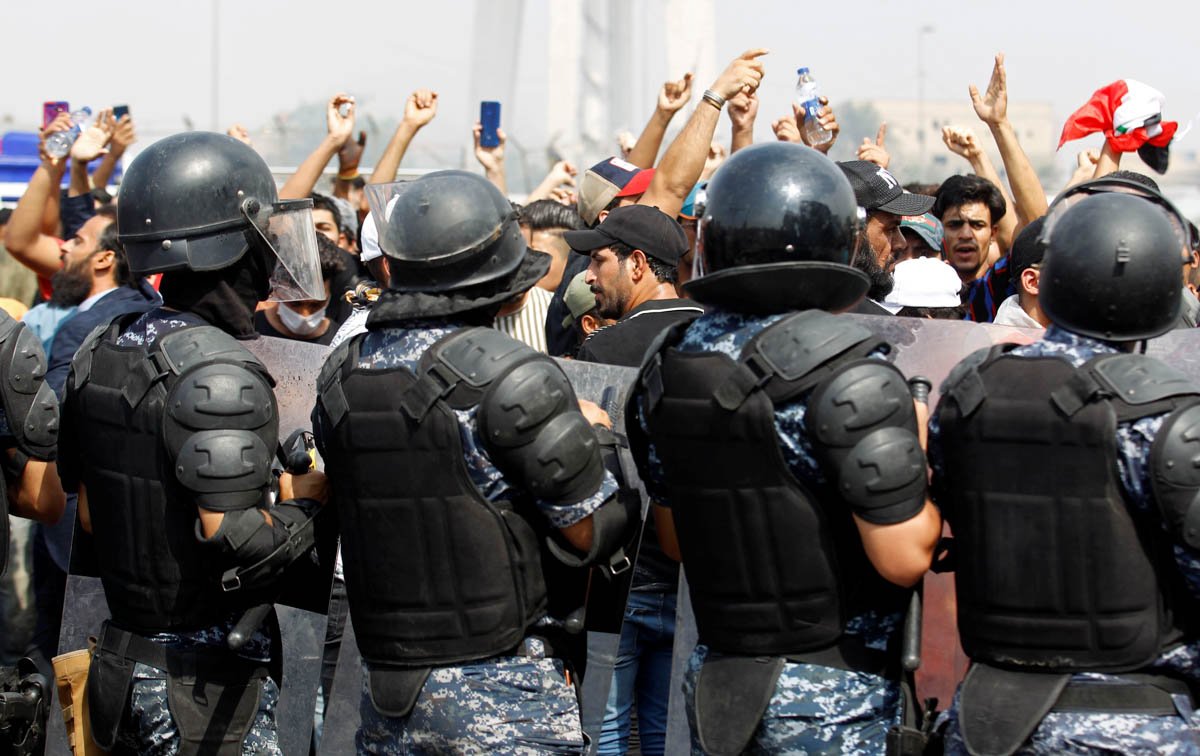 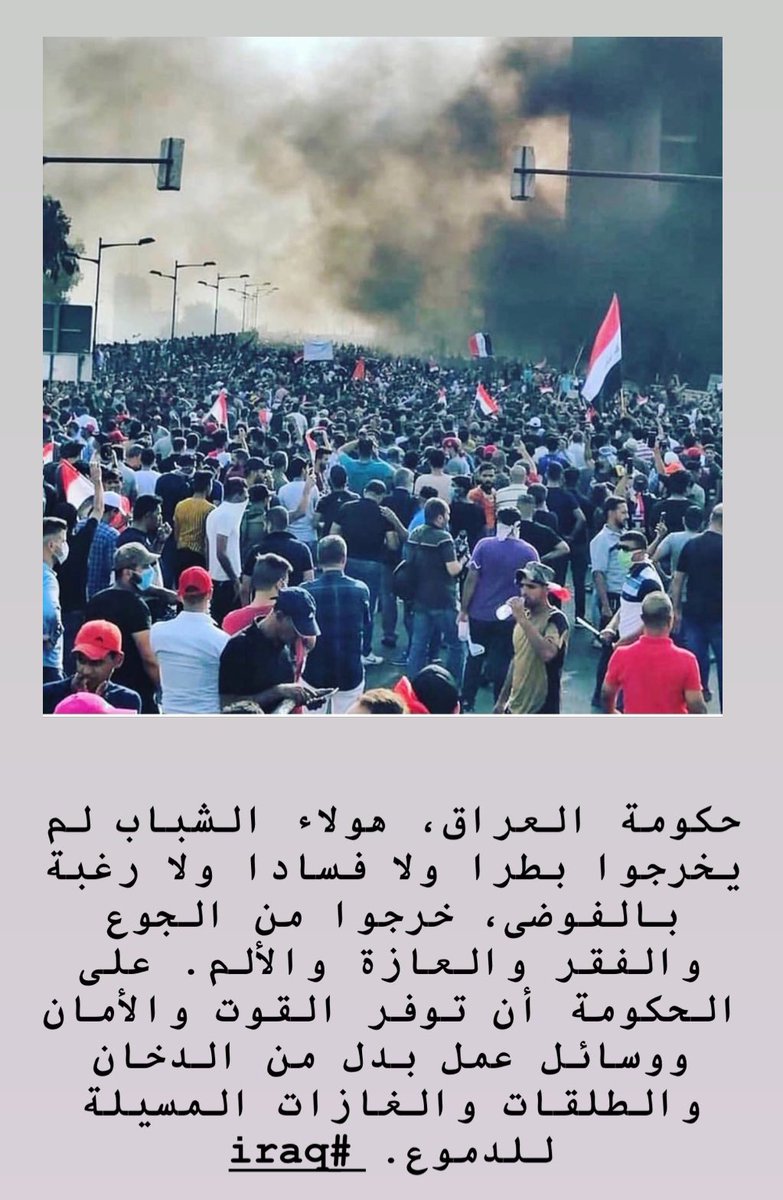 Denz‏ @DenzDejawon 3m3 minutes ago
If the protests of Iraq dies after Sistani says go home and wait for reform then the Iraqi people are falling for the biggest lie of the century. There will never be reform in these countries.
0 replies0 retweets0 likes