have you seen this?

i found this twitter thread to be very interesting:


Friday, August 25, 2017.  Chaos and violence continue, the director of a cartoonish pro-war film mistakes herself for an auteur, a homophobe (recovering?) gets applauded by HUFFINGTON POST, and much more.


Let's start with the nonsense.

I get it, Carlad Herreria needs a she-ro whose crotch she can bury her face in and she thinks that woman is Senator Tammy Duckworth.

It is offensive to identify Tammy repeatedly as "who lost both legs in . . ."  That's what happened to her, it's not who she is.  Carla and HUFFINGTON POST can't even fit Tammy's name in their headline.  They're reducing her to an object.

(B) Tammy thinks that transgendered persons should serve in the military.

That's her right.  (I happen to agree with her.)

Her losing two legs in the Iraq War doesn't make her opinion any more valid or any less valid than anyone else -- a fact Carla might realize if she could stop dreaming of Tammy's crotch (drooling over?).

(C)  Carla's so busy quoting that she doesn't do the job of reporting:

“When I was bleeding to death in my Black Hawk helicopter after I was shot down, I didn’t care if the American troops risking their lives to help save me were gay, straight, transgender, black, white or brown,” Duckworth said in a statement shared Thursday on Twitter.

Thanks for the fanzine bulletin, Carla.

I believe, when Tammy was bleeding to death, she did care whether the troops who helped save her were married.

Excuse me, rather they were married to members of the same sex.

Because in 2006, when she first ran for Congress (in a rigged primary that pushed out the real progressive Christine Cegelis -- and it was rigged as was the 'independent' media coverage), she was against marriage equality.

It wasn't until 2015 that Tammy came out for marriage equality.

That's three years after Joe Biden made his remarks in support of marriage equality on MEET THE PRESS.

So let's abandon the notion that Tammy's opinion is more valid than anyone else.  It's certainly not more valid because she lost two legs in war.

Were that the case, then let's find someone with even greater injuries -- and, yes, there are many more severely injured veterans -- because by Carla and HUFFINGTON POST's 'reasoning' they would be the ultimate arbitrary.

Ava and I have gone over this nonsense repeatedly, of elevating people to positions they don't warrant.  For example, then-Chastity Bono is forced out of the closet by THE NATIONAL ENQUIRER and is immediately made the voice of gay America by the media and by GLAAD.  She didn't have a clue.  She was an idiot.  Her comments about ELLEN got the show negative publicity and gave ABC an excuse to cancel it.  She did not just say "too gay" on THE TONIGHT SHOW, she said in interviews (including to THE HOLLYWOOD REPORTER).  She didn't know a thing and her opinion shouldn't have been treated like gospel but she became the media voice for lesbians.

Where is she now?

He is no longer the media voice for lesbians -- nor should he have ever been.

She can and should offer it.

Before treating it as gospel -- in shriekings better left to TIGER BEAT  -- we might need to evaluate the opinion and the source.

On a related note, glad for Patty's success but James Cameron is correct, WONDER WOMAN was not about feminism not was the character especially strong.  Women in James' films have tended to not only be more complex, but stronger as well.

And while I'm happy for Patty's success, surely she doesn't believe she wrote the screenplay.

It's actually an embarrassing film -- both for being pro-war (that's not what Princess Diana was about) and for refusing to grapple with the world.

It's movie-land.  Meaning they set it in WWI because they didn't want African-American characters.  And movie-knowledge allows them to get away with that.  (Meaning old movies rarely featured African-Americans in anything other than bit parts so the White landscape in WONDER WOMAN -- which is not reflective of the ear -- does merge with what many see as the past via feature films.)

When Patty can leave the cartoonish, glorification of war, she might have something to be proud of.

Until then, she should probably shut her mouth or others will step forward to respond as I have done-- this is the first time I've ever commented publicly on that film.  (As noted before, James Cameron is a friend.)

The Whiteness of WONDER WOMAN is truly offensive.

(And don't bring up Gal.  She's not playing a Jew, she's playing a White Amazon.  Do we want to explore the damage done to our society via enforced "passing"?  Didn't think so.)


Leaving cartoon war and its glorification for the reality of the Iraq War, RT notes, "The operation in Tal Afar has been going on for less than a week, but according to some estimates, over 10,000 local civilians have been displaced since its start. Those who manage to flee the battlefield have to walk for hours to reach safety."  They explain further:

Most people displaced from Tal Afar have to walk for hours “in arduous conditions before reaching safe areas,” and many arrive “exhausted and in poor health, often with critical levels of malnutrition among children, some unable to move,” the UN Migration Agency, IOM, reported on Tuesday. The people who flee carry a minimal amount of clothes, some only had what they wore, and some were only partially clothed, it added.
The IOM said that those who fled from the area arrive at military checkpoints and mustering points, and are then transported by the local authorities to areas including Hammam al-Alil, an area south of Mosul in the Nineveh Governorate, which hosts a displacement camp. From there, they are transported to other displacement camps and emergency sites.
Some refugees report “walking up to 20 hours before reaching Badoush, a point at which the authorities provide onward transport,” including to Hammam al-Alil, NRC reports.
“To get through those checkpoints, you need documentation. If you don’t have it or you have the wrong kind of documentation, you are prevented from moving further on,” Melany Markham, the Norwegian Refugee Council's (NRC) media coordinator in Iraq, told RT.


Another 'liberation' effort.  Didn't work for Ramadi, Falluja or Mosul -- they're still destroyed and thousands are dead.  But the same plan is being used again.


The military assault on Tal Afar might seem clear cut, but the combination of forces involved invites complications on the ground.
Approximately 40,000 troops are taking part in the fighting - three Iraqi Army divisions, Iraqi and US-led coalition special forces personnel, as well as "government-backed" paramilitary fighters from the Popular Mobilisation (Hashd al-Shaabi).
The Popular Mobilisation is an umbrella organisation under whose banner are militias like Kataib Hezbollah (Hezbollah Brigades), Moqtada al-Sadr's Saraya al-Salam - the current incarnation of the Mehdi Army - and the Badr Organisation.
The Popular Mobilisation's ranks also include fighters from Asaib Ahl al-Haq, a group trained by the Iranian Revolutionary Guards' Quds Force that has been accused of a number of kidnappings and attacks in Iraq.
The factions in the Popular Mobilisation are predominantly Shia and many are backed and funded by Iran. When you speak to them, many of their fighters do not try to hide their deep-seated disdain for Iraqi's Sunni population.


The forces -- not just the militias (which are now officially part of the Iraqi forces) -- are known for War Crimes.  The US government looks the other way -- as they pretend not to know so much else.


Child soldier in US-backed Iraqi Army. It is impossible for the US and coalition to be unaware of child soldiers. via @Omar_Madaniah 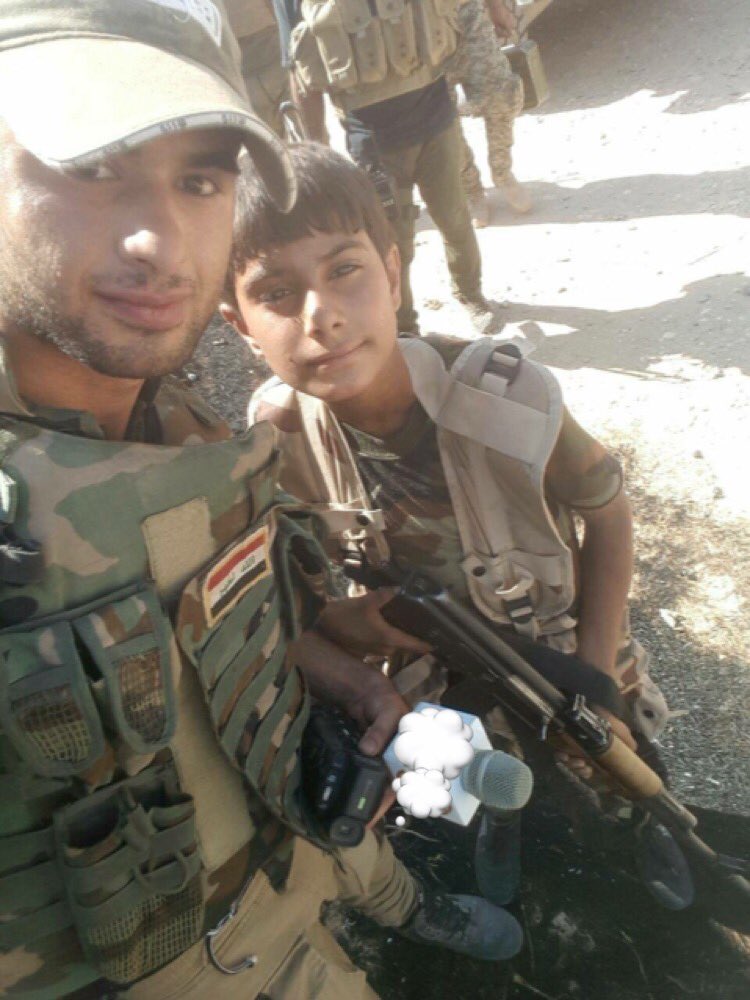 
As the Islamic State weakens in Iraq and Syria, the forces fighting the group are eyeing each other more critically. The United States and Iran are vying for influence in Iraq, and accusations are flying.
In the battle to control the Iraqi-Syrian border, the Sayyid al-Shuhada Brigades, an armed faction of Iraq’s Popular Mobilization Units (PMU) came under attack Aug. 7. In a strongly worded statement the same day, the group accused US forces of attacking their positions in western Iraq and vowed to avenge the casualties.
The statement said US forces had heavily bombed the brigades’ positions on and near the border, “killing and wounding many of our forces.” The group called for “an urgent meeting of leaders of the Islamic resistance factions in Iraq to consider an appropriate response.”
Denials came from many quarters. On Aug. 8, the Iraqi Joint Operations Command denied any attack on PMU positions in the area and stressed, “Incidents reported by the media occurred outside the Iraqi border.” Coalition spokesman US Army Col. Ryan Dillon stated via his official Twitter account, “Allegations of #coalition strikes vs. Popular Mobilization [Units] near #Iraq-#Syria border are INACCURATE. No coalition strikes there [at this time].” Even the leadership of the wider PMU issued a statement the next day echoing the coalition’s denial.

All the lives lost, all the money wasted, all the homes destroyed and how's that worked out?  A war that's now passed 14 years.
Hijab Khan 🇵🇰‏ @_Hijab_Khan  7m7 minutes ago

Before the U.S invaded Iraq in 2003,there has never been a suicide blast in Iraq, while 1892 blasts, after invasion #ExposeAmericanTerrorism
0 replies9 retweets6 likes

Today AHLUL BAYT NEWS AGENCY reports, " Iraq witnessed nine of the 11 deadliest attacks in 2016, all claimed by ISIS militants, said a study by the university’s National Consortium for the Study of Terrorism and Responses to Terrorism (START)."  That's the never-ending Iraq War.
Sold to you by the press which cheerleaded it before it began and then for years after.  Still sold to you by the press when they moved to ignore it because it was going so poorly.  Andre Damon (WSWS) observes:


Another example of the convergence between the press and the military/intelligence establishment is an op-ed published Wednesday by Thomas Friedman, the New York Times ’ chief foreign policy columnist. Friedman boasts of having “spent eight days traveling with the Air Force to all of its key forward bases in Afghanistan, Iraq, Kuwait, Qatar and the United Arab Emirates,” including a trip to a “strike cell” carrying out airstrikes in Iraq.
Friedman describes US air strikes in an urban area with undisguised enthusiasm. “Quickly, the smoke cleared and the 30-foot-wide building was smoldering rubble—but the two buildings to the sides were totally intact, so any civilians inside should be unhurt,” exults the Times columnist, without pondering the fate of any civilians who were in the building that was vaporized.
“This is the war in Iraq today in a nutshell,” he writes, suggesting that the American military as a true liberator focuses its energies on preventing civilian casualties. This criminal lie is, of course, contradicted by the reality of millions killed, wounded and uprooted by more than a quarter century of US wars in Iraq and surrounding countries in the oil-rich Middle East, including the recent leveling of Mosul. Unfortunately for Friedman and the Times, this panegyric to the moral purity of the American military appeared two days after a US air strike in Syria killed more than 40 civilians.
Friedman’s whitewashing of the homicidal activities of the US Air Force exemplifies the role of the press, led by the New York Times and Washington Post, as shameless cheerleaders for US military intervention, together with the major TV networks, which routinely present retired military officials as authorities on all questions of policy.

SICKOFITRADLZ
They still go on and on