let's let the tweets speak for themselves:

FWIW: inferring that there must be some corrupt motive behind The Intercept's publication of this is misguided. Many within the org share the mainstream view of Trump/Russia and are permitted to express themselves accordingly. Not much more to it than that
8:21 AM - 16 Feb 2018
22 replies5 retweets48 likes

'the intercept' should have been so much more.

Among the leading contenders is Al-Maliki himself, heading his State of Law Coalition, while several PMU leaders — some loyal to Tehran — have joined new Shiite coalitions. There have also been rumors that Masoud Barzani, the head of the Kurdistan Democratic Party and former KRG president, has been testing the possibility of an alliance with Al-Maliki. This alliance would constitute a major challenge to the current prime minister’s re-election. Last month, Abadi announced his re-election bid at the head of a cross-sectarian bloc, the “Victory Alliance,” which collapsed after less than 48 hours.
The return of Al-Maliki to the premiership is a dreadful and not far-fetched prospect that would put many foreign investors on the back foot. The current vice-president remains a widely influential figure and leads the largest bloc in parliament.
But the key challenges facing the future Iraqi government and its hopes of building a much-needed investor-friendly environment do not end with the people’s leadership choice in a few months’ time. Corruption will remain a cause of major concern, and the related matters of transparency, accountability and even the existence or otherwise of qualified local staff to deliver the various projects will define success or failure.


Nouri al-Maliki's return?  The possibility that the man whose actions caused the rise of ISIS in Iraq could still return as prime minister says a lot about how little has been accomplished in the last four years in Iraq.

The fact that Hayder and Nouri promise so little and differ so little also says a great deal about how bad things remain in Iraq.

Both men remain members of the Dawa political party and Hayder is a member of Nouri's political slate State of Law:


Division within the SLC, and its lead faction, the Dawa Party, to which Maliki and Abadi both belong, left it unclear how Abadi would run. While Abadi kept his own counsel on his plans throughout 2017, Iraqi and pan-Arab news reports indicated he would run on a separate electoral list as a representative of the Dawa Party. Maliki would again head the SLC, with Dawa part of the alliance. It never seems to have occurred to Abadi to clarify with Iraq’s Independent High Electoral Commission (IHEC) if the party was permitted to run on two separate electoral alliances. The issue was clarified on January 8 when IHEC ruled that parties could not do so according to article 29 of the 2015 Political Parties Law.
This led to a deadlock within the Dawa Party because Maliki, who has remained its secretary-general, had the party registered in his name as a way of blocking Abadi. When a majority of the party’s leadership supported Abadi, on January 13 the party decided to not run at all, allowing candidates to join any coalition as independents. Since registration of new coalitions closed on January 11, the electoral map is now clear, though parties can join or leave coalitions until February 10, when candidate lists are due. Among major Shia leaders, Abadi registered the Nasr (“Victory”) Coalition, which quickly grew to include 29 parties. Maliki again registered the SLC, Badr Organization leader Hadi al-Ameri leads the Fatah (“Conquest”) Alliance, while Muqtada al-Sadr founded a new party called Istiqama (“Integrity”), which will be part of a new coalition called Sairun (“March Onward”). Ammar al-Hakim also registered the Hikma Current, which he had formed in July 2017 after splitting from the Islamic Supreme Council of Iraq (ISCI).
In an effort to ensure a win, Abadi pivoted from his conflict with Maliki to an attempted alliance with Ameri’s Fatah. Abadi, who spent the past three years advocating non-sectarian politics, in recent months even promising a cross-sectarian coalition, endured enormous criticism for the cold pragmatism that drove him to an alliance with Fatah, which is made up of the political wings of Iran-backed militia groups. While Abadi’s current list does have Sunni candidates, his bloc is dominated by Shia Islamists—and because the Sunni candidates are not as prominent, it is possible none of them will win in their provinces and Abadi could end up with an all-Shia bloc in parliament. However, criticism remained even after the Abadi–Ameri “Nasr al-Iraq” alliance, announced the evening of January 14, collapsed less than 24 hours later when Fatah withdrew. Its leadership seemed in disagreement over the benefits of allying with Abadi; however, Ameri emphasized that he was ready to join coalition after the elections. Other factions have left since left Abadi’s Nasr coalition, including Hikma.
The election will also be a referendum on Sadr, who has spent the past two years rebranding himself as a unifying populist pushing for reforms and clean government, in part by allying his Islamist followers with secular protesters. Yet the protest movement that Sadr has led jointly with the secularists has been controversial given the Sadrists’ own political ambitions. The Civil Democratic Alliance (CDA), Sadr’s protest partners and Iraq’s main secularist party, which won five seats in 2014, has split into four parts, weakening their own chances of obtaining any seats. Furthermore, efforts by Sadr’s appointed leader for Istiqama, Hassan al-Aquli, to obscure the fact that it is just another Sadrist party in secularist clothing could undermine its credibility.
Another challenge for Abadi is the boycott effort promoted by activists on social media, mostly in response to the expectation that the election will simply reproduce the current political elite. Yet this could become a self-fulfilling prophecy. It has long been clear anecdotally that many Iraqis are dissatisfied with Islamist and sectarian parties, and a 2017 survey from the Baghdad-based Bayan Center confirmed this. Still, the superior organizational resources of Shia Islamist-dominated lists, division among secular factions, and the impact of the boycott mean that the election is likely to produce another Shia Islamist-dominated parliament.

Right now, it looks like the current prime minister, Haider al-Abadi, has a good chance of keeping the job. However his rival, Nouri al-Maliki, is also jockeying to take back the position he once held. Both men are Shiite Muslim politicians from the same party and are also bitter rivals, whose competition represents a wider split between Iraq’s Shiite Muslim-dominated political establishment. Both politicians and their supporters are working, in public and behind closed doors, to persuade the Kurds their cause will  get better support.
The Kurdish politicians spent eight years under al-Maliki and the last four years, they have been dealing with a government headed by al-Abadi. Although the Kurds supported the Shiite parties after every election since 2005, both prime ministers have left them with bad memories.
One of the most powerful parties in the semi-autonomous northern region, the Kurdistan Democratic Party, or KDP, plans to wait until after the elections to decide who it might ally itself with, says Rasul Razgaey, a KDP spokesperson. Neither possibility looks particularly appetizing right now, Razgaey agreed.
“Al-Maliki stopped paying the salaries of Kurdish staff and al-Abadi attacked the region,” Razgaey told NIQASH; he is referring to budget quarrels between Iraqi Kurdish politicians during al-Maliki’s administration and more recently, the fact that, last October the Iraqi military, under instructions from al-Abadi, reclaimed territory that the Kurdish had previously controlled. “You should expect anything and everything in politics,” Razgaey continued. “There is no permanent friend or enemy. And anyway, we do not know if another party altogether might win the majority.”

The scrapping over who is a better friend to Iraq’s Kurds is highlighted by recent events. During an interview with the Iraqi Kurdish media house, Rudaw, al-Maliki said he believed it was wrong not to pay the salaries of Iraqi Kurdish civil servants – that is despite the fact that it was his government that originally made the decision. After the interview al-Abadi made new promises to finally send the money north and he also agreed to meet further Kurdish delegations to discuss the matter.


Seems like we're not the only ones who dismissed the lie that Nouri wasn't interested in being prime minister again.

There are no new developments in Iraqi politics, just more of the same.

Which explains a great deal of the ongoing frustration.

In a statement issued on Wednesday, @masoud_barzani said Kurds have dealt with successive central governments since the creation of #Iraq in the 1920s which have continuously disregarded the minority’s concerns, rights, and future. #TwitterKurds
3 replies38 retweets80 likes

Memories across Iraq could lead to many not voting.  The Sunni rich province of Anbar could be such an area.  Kamal al-Ayash (NIQASH) reports:

There are over a million potential voters in Anbar and there are 71 polling centres throughout the province, as well as offices to oversee the polling centres. However, some of the latter are still closed as they are based in areas that were, until relatively recently, controlled by the extremist group known as the Islamic State.
According to Iraq’s Independent high Electoral Commission, or IHEC, only 31 percent of potential voters in Anbar have updated their entries on the electoral roll, a significant sign of political lethargy and voter apathy.


Even local tribal leaders are expressing these kinds of feelings. Previously community and tribal leaders would often persuade their family members and distant relations who to vote for. Politicians would spend time and money on sweetening up the tribal leaders to exactly that end.


Nearly 15 years after the start of the Iraq War, the above passes for 'progress.'

Fifteen years ago, on Feb. 15, 2003, somewhere between 6 million to 11 million people turned out in at least 650 cities around the world to protest the United States’ push to invade Iraq. It was the largest anti-war protest and remains the largest one-day global protest the world has ever seen.
Today, there are still 5,000 U.S. soldiers in Iraq and continued war on terror operations in close to a dozen other Middle Eastern, Central Asian and African nations. The war is ongoing. The anti-war movement, practically speaking, is not. What happened?
One explanation is that the anti-war push of 2003-2007 was successful — not in ending the war, but in knocking out the political party that started it.
The anti-war movement was not purely an anti-war movement, as Indiana University professor Fabio Rojas pointed out. He described the anti-war protest movement as “two groups coming together”: the core peace movement and the larger group of people who were registered Democrats and opposed to the Iraq war and then-Republican President George W. Bush, in general.
“Once the Democrats win the White House,” he said, “the two groups start moving apart.”

Me amongst millions more. 15 years ago today me and my mate Sally got the coach at the crack of dawn from outside the Leeds University steps and went down to London to call on Tony Blair's Government not to support Bush's invasion of Iraq. 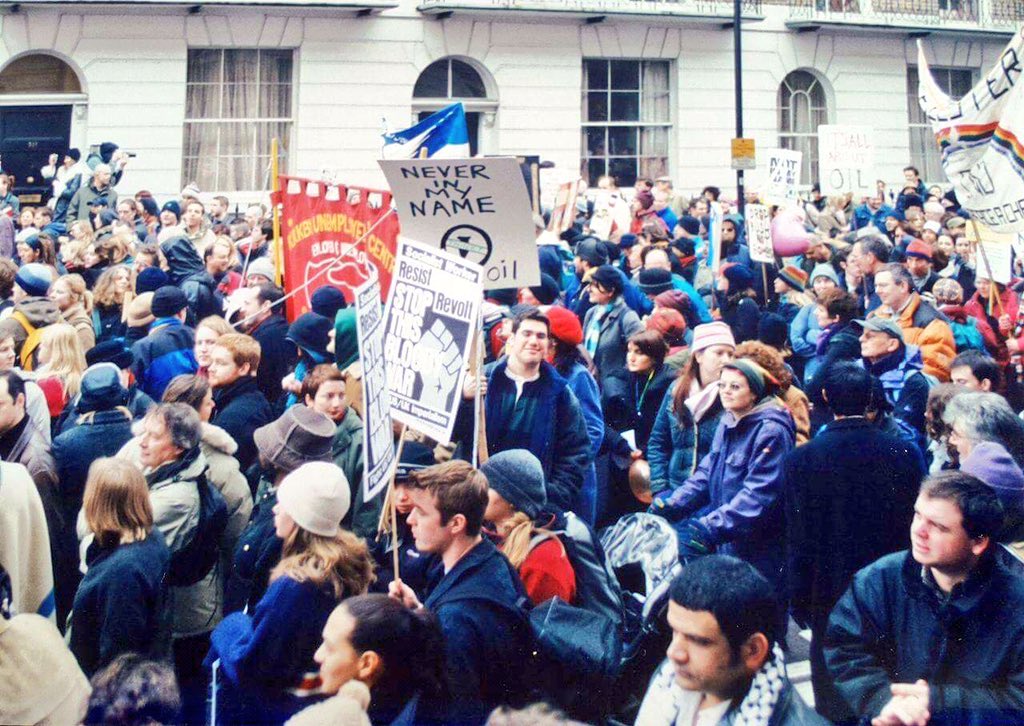 
Fifteen years on from Iraq, peace in the Middle East is further away than ever, says @EmilyThornberry. Labour will end the bomb first, talk later approach that has made our country and the world less safe. theguardian.com/commentisfree/…
52 replies147 retweets307 likes

Fifteen years ago today millions of people marched against the Iraq War in more than 600 cities across the world. The biggest protest in history. 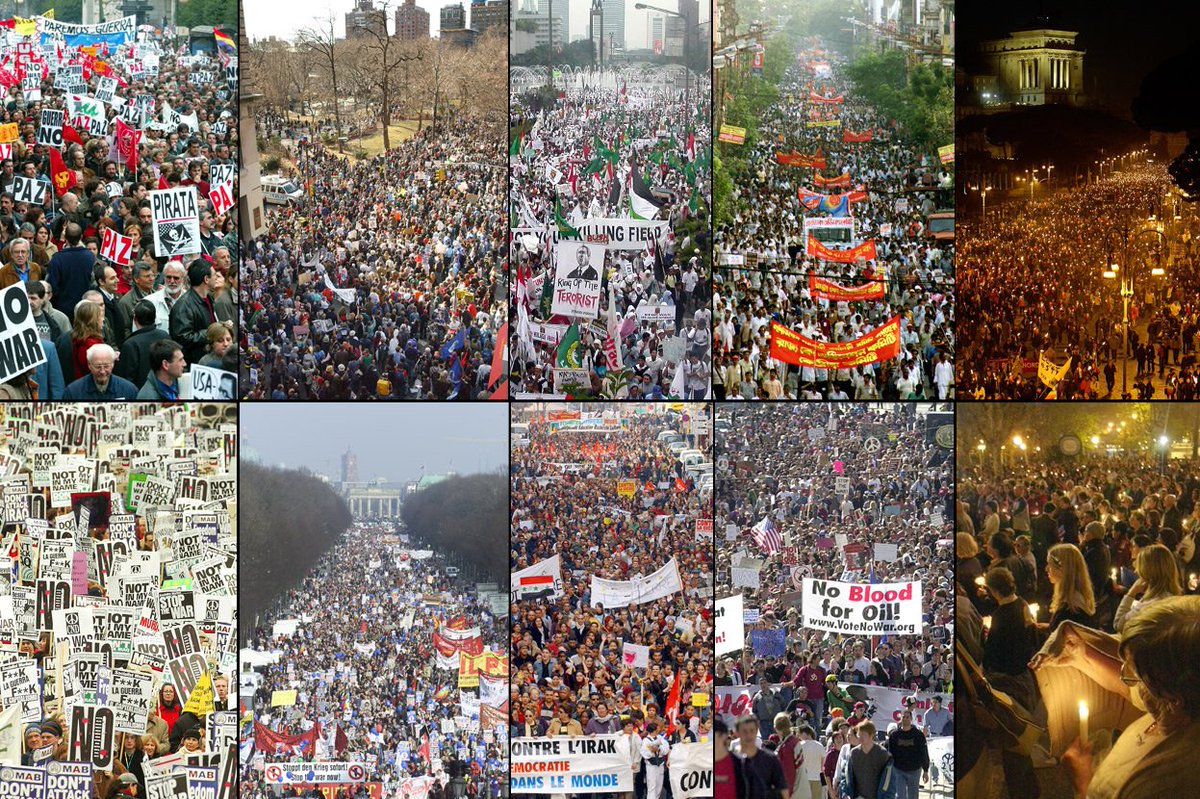 Fifteen years after Iraq war protests, peace is further away than ever | Emily ThornberryJeremy Corbyn’s warnings on Iraq, Libya and Syria have proved right, and now Iran looks like the next battleground, writes shadow foreign secretary Emily Thornberry

Fifteen years ago today, two million people marched against the disastrous and illegal Iraq war. We warned that the war would create catastrophe in the region and make us less safe at home but the establishment didn't listen. This must never happen again.

February 15, 2003 Fifteen years ago today millions of people marched against the Iraq War in more than 600 cities across the world. The biggest protest in history.