Abderrahim Foukara lied, "All the signs during that debate in congress yesterday were that the Republicans as concerned as they legitimately are about the safety of U.S. personnel in various parts of the world. But they have found a serious opening from which they can attack President Obama at a time of election nearing."

He didn't know a damn thing he was talking about and your first clue is "that debate in Congress yesterday," the hearing was Wednesday, you stammer stupid fool.

He didn't know a damn thing.

Nor did Nathan Guttman who also lied and Courtney Kube who revealed she's a damn idiot.  "They may not have been in Benghazi to help anyway," she blathered like the blonde she must be.

Apparently attending a hearing is too much work for the 'reporters.'

They'd rather just whore like the cheap ass, disease ridden whores that they are.

And don't think I'm leaving out nutty Diane Rehm who opened up the topic of yesterday's hearing pondreing "was it simply an opportunity to bash the opposition"?

When she dies, she will not be missed for journalism.

She won't stand for any left belief or cause but she'll whore her tired, worn out ass for the Democratic Party.

I hate whores.  And ugly, old whores like Diane Rehm?  The CDC should shut them down.


I was at the hearing.  Diane and her guests obviously weren't and shouldn't have talked about a hearing they didn't attend and didn't know anything about.  Everyone made multiple factual errors and they probably didn't even spend 5 minutes discussing the hearing on the show.

They're idiots and their leader (Diane) is an idiot.  What a waste of public funds. 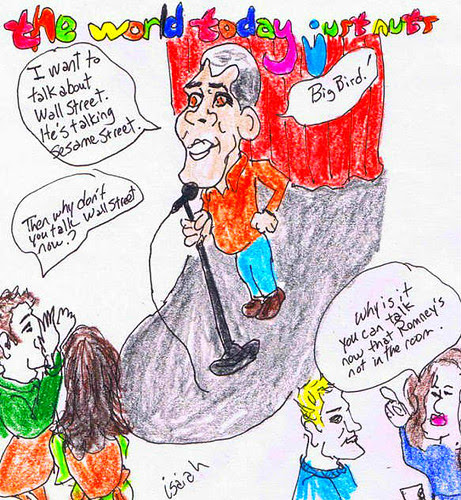 but i wish i hadn't read them.

to be clear, they were identified as spoilers.  i had plenty of warning to turn back.  but i read each 1.

and did so for the same reason that i search for my christmas gifts each december, i want to know!

but now i wish i'd waited for the episodes to unfold.

does that make sense?

ironically, i don't have that reaction to christmas gifts.

when i find out my gifts, i'm still happy and thrilled.

but when i read a 'revenge' spoiler, i'm immediately guilt-ridden and wish i'd just stuck to the episodes.

so let me give you some 'spoilers,' i think you'll enjoy them.

1) faux amanda's not the only 1 who's pregnant this season.  conrad's going to be a father.  but as part of the new science which allows them to create sperm and egg, conrad is pregnant.  with the white haired man's baby.  this is all the more of an issue now that the white haired man is dead.

2) charlotte has finally kicked drugs.  but just when she thought her problems were over, she ends up a lean cuisine addict.  she finds herself running to the super market at all hours, staring at the frozen dinners, grabbing them and reading calories.  moaning in frustration as other shoppers stare at her.

3) daniel realizes he doesn't love ashley.  but doesn't tell her.  leading to a huge shock for ashley when she walks into the cabana bedroom to discover daniel nude and making out with another man - also nude.  she starts screaming that this is just like when she walked in on tyler making out with nolan.  daniel's had her back to her the whole time.  he says, 'no, it's not.'  sighing, he whispers, 'i'm really in love with him.'  daniel turns around and steps to the side and ashley sees daniel was making out with a mirror, making out with his own image.  'i'm not good enough for him!' wails daniel as ashley asks, 'what am i?  an asshole magnet?'

so those are 3 'spoilers' you never have to worry might somehow come true.

The first challenge the deal must overcome is Parliamentary. Maliki can sign the deal, but Iraq's legislature has to authorize the money for the purchases in its budgets. There has already been some pushback from that quarter, and time will tell how Maliki fares.
The next challenge will involve fielding, though this an easier hurdle. Iraq never really stopped operating Russian weapons, including tanks, artillery, helicopters, and guns. Some were scavenged and restored from the Saddam-era military. Others were provided by US allies. Still others, like Iraq's Mi-17 helicopters, were bought using the USA itself as an intermediary. What's different about these buys is that they involve a direct relationship with a new source for support, and also involve new roles within Iraq's reconstituted military. Working our those kinks, and training to use their equipment's full capabilities without endangering their own forces, is going to take work and time.

At The National Interest, Paul Pillar is more interested in figuring out what the deal means:

We can draw several implications from this news. One is that it fills in further the picture of what legacy was left in Iraq by the U.S. war that ousted Saddam. The regime that emerged from the rubble is not only increasingly authoritarian and narrowly sectarian and not only chummy with Iran; it also is becoming a client of Moscow. A trifecta of failure.
A second lesson concerns the notion that committing military support to a new regime in the making is essential for having a good relationship with it and to be considered a friend rather than a adversary once such a regime comes to power. This idea is being heard increasingly as an argument for doing more to assist rebels in Syria. We need to get in on the ground floor with the new bunch and accept risks and commit major resources, it is said, in order to be held in favor by whatever regime emerges from that rubble. But the United States got in on the ground floor more than once in Iraq—with the Baathists in 1958 and with the successors to Saddam after he was overthrown. In the latter case it did so with the expenditure of enormous resources. And look how much friendship and influence it bought.

BBC's Rami Ruhayem shares, "Until recently, Mr Maliki seemed to possess a magical ability to keep both Washington and Tehran happy.  But recent events suggest Baghdad could eventually face the unnerving possibility of having to choose one or the other." All Iraq News reports that Nouri has met with the Czech Republic's Prime Minister and explained that they wish to increase economic and military ties.  In Prague today, he's also declared that he hopes to work with the Czech Republic in building oil refineries in Iraq.  AP adds, "The prime ministers of the Czech Republic and Iraq say their countries are negotiating a possible deal for the Iraqi military to acquire Czech-made subsonic L-159 military airplanes."  AFP quotes Nouri declaring, "A certain agreement has been reached."


As Nouri goes on a weapons spending spree, Iraq still can't provide its people with the basics.  Electricity goes in and out.  Potable water is a dream in many areas.  Potable water is especially an issue this time of year as the annual cholera outbreak arrives in Iraq.  All Iraq News reports that water trucks are being used in Baghdad.  These trucks contain potable water -- safe drinking water.   Al Mada reports that Baghdad is very afraid of a cholera outbreak as Sulaymaniyah and Kirkuk have seen outbreaks and at least two people have recently died due to cholera.  Alsumaria reports that local government in Babylon is assembling a body to address any cholera outbreaks.  A national plan to address the health crisis remains absent -- this despite the fact that the cholera outbreaks are now a yearly occurrence and have been for years now.  Only in Nouri's Iraq.  But, hey, Nouri is stockpiling weapons.
As usual, what Nouri can't address, the KRG has to.  Press TV (link is transcript and video) reports:
Government ministries in Iraq's Kurdistan Region are pulling together to prevent the spread of cholera. Over 70 people are being tested for cholera every day amid an epidemic in the region's Sulaymaniyah province. Those affected are scattered throughout the province, making it difficult to pin point the exact source of the outbreak.
Turning to violence,  All Iraq News reports that 1 lawyer, Mohammed Mjul Sultan, was shot dead in Mosul today and a Mosul roadside bombing left four police officers injured. Alsumaria reports another Mosul bombing left two police injured, another Mosul roadside bombing left 2 dead, 1 corpse was discovered in Mosul, the son of  a Kirkuk police director was kidnapped, and mass arrests saw 77 Iraqis hauled from their homes.
In other news, Focus Information Agency notes the Turkish Parliament voted today to continue -- for at least another year -- "the government's mandate to order military strikes against Kurdish rebels holed up in neighboring Iraq."  Hurriyet Daily News explains, "Parliament authorized cross-border operations into northern Iraq in 2007 and has extended the mandate each year since then. The motion would authorize the government to determine the scale, scope and timing of military action. The current mandate of the motion expires Oct. 17."  The Voice of Russia says Turkish war planes again bombed northern Iraq today.
Meanwhile, it's not up there with one of Chris Hill's many infamous tantrums while he was the US Ambassador to Iraq but it is rather disturbing.  AFP report that Robert Beecroft, the new US Ambassador to Iraq arrived in Iraq today "and was sworn into his new position."  To quickly recap, Brett McGurk couldn't keep it in his pants and he ended up losing his nomination.  (Most were surprised that Barack would ever nominate someone who had savaged him in a column but that's Barack, he only respects the people who don't give him love -- ah, Daddy issues.)  September 11th, the White House announced they were nominating Beecroft for the post.  Despite many being out of DC to campaign for re-election (a third of the Senate seats will be elected in November), Senate Foreign Relations Committee Chair John Kerry moved heaven and earth to get a hearing up and going for September 19th.  Days later, September 22nd, Beecroft was confirmed by a voice vote.  Good for Kerry for pulling it off -- the hearing, the vote -- and so quickly but while he was busting his butt, did anyone realize Beecroft was not in any hurry to get to Iraq.  September 22nd he was confirmed and October 11th he arrived.  He has now topped Chris Hill's travel record (however, unlike Hill, he did not tell the Committee that the minute he was confirmed he would hop a flight to Iraq -- Hill did make that promise, Hill did break that promise).
In the US, there's a presidential election weeks away.  The Green Party candidate is Jill Stein.  Libby Liberal is supporting her.  Libby has an action she'd like others to take part in:

Send a U.S. snail mail complaint (again a matter of minutes and a stamp):

She has an analysis of PBS that you should read but I'm stopping her suggestions there.  She goes on to suggest local PBS stations be contacted.  Great idea if it were the summer.  It's too late for your local stations to do anything.  A few months back, they might have some pull.  But with the elections weeks away, PBS content supplier is the one to contact, not your local stations.  (However, contacting local stations may help local Greens get covered and that might be what Libby's going for.)
iraq
the los angeles times
jeffrey fleishman
michael r. gordon
bernard trainor
all iraq news
alsumaria
al mada
dar addustour
alrafidayn
the center for investigative reporting
amanda pike
defpro
defense industry daily
the national interest
paul pillar
bbc news
rami ruhayem
press tv
the associated press
Posted by Sex And Politics and Screeds and Attitude at 10/11/2012 10:00:00 PM