okay, so 'dynasty'?  i think it's doing a great job, yes.  i am surprised by how good nicolette sheridan has been on the show.  happily surprised.

why would i want to watch real life?

i took my daughter to get her hair cut today and t was backed up so i was going to a different place that t suggested.  she said, 'i can squeeze you in' but i said i wasn't going to put her out.  she said she had spots in the afternoon.  but i said we'd go elsewhere.

i waited an hour before we split.

1st off this man and woman were there with 3 unruly children all under the age of 4.

2nd when the woman's hair's done they start cutting the oldest child's hair.

why is that a problem.

i should probably note that i am seated by the door.  so they start cutting the oldest child's and the woman says, to her husband, 'okay, while her hair's being cut, grab the baby and let's go outside and smoke.'

and they grab the infant and step outside and smoke.

right by the door.

and every time it opens, we can smell it.

they are supposed to be x number of feet away from the entrance.

and worse, they left the 2nd youngest inside.  and he's running around grabbing product off the shelves and throwing it around the store.

i finally left.  my daughter an i went out to eat and then we went to t's. and she cut the hair perfect.

i should have gone with her to begin with but didn't.  because i was in a hurry.

Wednesday, May 2, 2018.  10 days until parliamentary elections are supposed to take place.


There's no whore like an old whore.  Jane Arraf's been filing on Iraq repeatedly of late for NPR and the NPR friends have been calling and asking for links.  I had begged off previously but now I'm grabbing one and I'm sure they're going to wish they'd never asked.

On today's MORNING EDITION, Jane speaks with US Major General Walter Piatt about the changes for US troops in Iraq.

Jane Arraf: Well he actually won't put a number on how many of them will stay but it is expected to be several thousand.  And he says they are now transitioning.  He is now the deputy commander for transition and he says instead of backing up Iraqis in active combat they are doing more focused security helping, more specialized training.

At any point do you leave today to contrast what others have said publicly?  Specifically, do you ever note that the American people were repeatedly told that the US forces were not in combat?  Nope.  Like a good whore, you just repeat "he says" for today and count the money he left on the dresser.


We went over all of this on Monday.  The only news value in the latest round of statements is the confession -- by comparison of previous official statements -- that the American people were lied to.  That is the story.  Coming in two days later, Jane still can't do reporting.  She still can't provide a reason why these statements actually deserve repeating.

But Jane covered for Saddam Hussein and for Nouri al-Maliki (and currently for Hayder al-Abadi) so it's not like truth has ever been the hallmark of any of her work.

This is at least Jane's third report this week from Iraq for NPR and the other two were also low on facts.  NPR is the outlet who, in March 2010, the day after the elections, featured Quil Lawrence announcing that Nouri al-Maliki would remain prime minister because his State of Law had won the most seats.  Only, the votes were being counted and not even half had been counted nor had any total been release -- partial or full.  Only, when the ballots were counted -- and then recounted because Nouri screamed fraud -- the results were that Nouri's State of Law did not come in first, Ayad Allawi's Iraqiya did.

In fairness to Quil, the 'results' he cited were provided to him by Nouri al-Maliki's camp -- a fact he failed to disclose -- and it was actually an unscientific poll from before voting started -- another fact he left out of his report.

So Jane Arraf carries on a long, dishonorable chapter at NPR when it comes to 'reporting.'

With Iraq, we’ve been here before — last time it resulted in ISIS"If we leave again, 10-year-old Americans will be fighting as 20-year-old men and women in Iraq."
thehill.com

The link goes to a column at THE HILL by neocon Michael Pregent who is in a panic that it's 2011 all over again.  The US will leave and something like ISIS will rise.

Does Pregent know why ISIS rose in the first place?

Nouri's persecution of Sunnis.  In fact, after the drawdown, he was having tanks circle Sunni politicians homes in Baghdad.  A detail Pregent seems woefully unaware of.

Could there be a repeat of that?

But remember, the Iraqi people didn't vote Nouri into a second term.  Barack Obama secured that second term eight months after the election when the US negotiated The Erbil Agreement -- a contract that circumvented the Iraqis votes and installed Nouri in a second term.

Nouri is a thug and that was already known.  Then-Senator Hillary Clinton had used the term in a 2008 hearing -- which was why Joe Biden was the senior party on Iraq in the first Obama administration and now Hillary.  Nouri loathed her for that remark.  Senator Barbara Boxer, the same April week of 2008, called him a thug.

It seems the only Democrat unaware of Nouri's thug ways was Barack Obama.  Or maybe he just didn't care?  Samantha Power insisted on Nouri and insisted that this was the only way to get what the US wanted.  Samantha Power was, yet again, wrong.

These mistakes may be repeated.  The US government is willfully blind to Hayder's actions because they want him to have a second term.


Aileen Torres-Bennett (WASHINGTON DIPLOMAT) speaks with Nicholas Heras of The Center for a New American Security:

Prime Minister Abadi is central to the U.S. exerting influence in Iraq. “Ideally, what the U.S. military would want is that Abadi weathers the political storms of 2018,” said Heras. “As long as Abadi is in power, he seems willing to give the U.S. political cover, as long as U.S. troops remain on their bases and provide air support against ISIS. That’s a pillar of U.S. policy in the Near East. If Abadi goes, which could happen, the U.S. stands to be at great risk. U.S. troops would be directly targeted. The U.S. would be ignominiously told to leave.”


If Michael Pregent wants to fret over what might happen, he first needs to grasp what actually did take place.


Right now, as NPR's Steve Inskeep rightly noted at the start of Jane's segment this morning, "Some US troops will remain.  But the US is shutting down its coalition command center for land operations in Iraq.  That is said to mark the end of major combat operations against ISIS."

Abadi's campaign complains that Barzani's police in Duhok are harassing & in some cases detaining their candidates.
1 reply4 retweets3 likes

If the KDP police are arresting Abadi's candidates, it has got to be out of reflex rather than genuine, calculated fear of losing seats. Even Kurdish opposition parties are struggling to break into Duhok.
2 replies1 retweet1 like

Kirk H. Sowell‏ @UticaRisk
I mean, Abadi's campaign rhetoric seems designed to, on the one hand, attract Arabs who are hardline opponents of Kurdish independence, & on the other, repel Kurdish voters.
2:39 AM - 1 May 2018
1 reply0 retweets0 likes

Replying to @UticaRisk
IOR reporters have looked into this and haven't been able to substantiate any of the stories. I suspect this is pre-election propaganda, not factual news.
0 replies1 retweet1 like

Hayder al-Abadi's lies are rather obvious.  They've been going for at least eight days, these false claims.  It's telling about what type of person he truly is.  But, hey, he keeps lying that TIME magazine called him the most important person in the world -- keeps lying about that in his campaign literature -- so we know he's not very committed to the truth.

May 12th, elections are supposed to take place in Iraq.  Ali Jawad (ANADOLU AGENCY) notes, "A total of 24 million Iraqis are eligible to cast their ballots to elect members of parliament, who will in turn elect the Iraqi president and prime minister."  RUDAW adds, "Around 7,000 candidates have registered to stand in the May 12 poll, with 329 parliamentary seats up for grabs."  AFP explains that the nearly 7,000 candidates includes 2014 women.   RUDAW also notes that 60 Christian candidates are competing for the five allotted minority seats.  How do they elect the prime minister?  This comes after the general election and is based on who won seats in the election.   Abdulrahman al-Rashed (AL ARABIYA) explains, "To win the premiership, a candidate needs to win the majority of the votes, i.e. the votes of 165 MPs out of 329. Since it is a multi-party system, it is almost impossible to win these votes without sealing political alliances. The governorate of Baghdad is the most important one because it is the largest with 69 seats."  The chief issues?  Mustapha Karkouti (GULF NEWS) identifies them as follows, "Like in previous elections, the main concerns of ordinary Iraqis continue to be the lack of security and the rampant corruption."

As noted in the April 3rd snapshot, pollster Dr. Munqith Dagher has utilized data on likely voters and predicts that Hayder al-Abadi's Al-Nasr will win 72 seats in the Parliament, al-Fath (the militias) will get 37 seats, Sa'eroon (Moqtada al-Sadr's new grouping) will get 27 seats, Nouri al-Maliki's State of Law will get 19 seats, al-Salam will get 18 seats (KDP and PUK parties for the Kurds), Ayad Allawi's Wataniya will get 15 seats. There are others but Dagher did not predict double digits for any of the other seats. The number are similar for the group of those who are extremely likely to vote (Hayder's seats would jump from 72 to 79 seats).  Other predictions?  The Middle East Insstitute's Fanar Haddad insists to Sammy Ketz (AFP) that the post of prime minister will come down to one of three people: Hayder al-Abadi (current prime minister), Nouri al-Maliki (two time prime minister and forever thug) or Hadi al-Ameria "a leader of Hashed al-Shaabi, a paramilitary network that played a pivotal role in defeating IS. Ameri comes from Diyala province and is a statistics graduate from Baghdad University. He fled to Iran in 1980 after Saddam executed top Shiite cleric Ayatollah Mohammed Baqr al-Sadr. The 64-year old is widely viewed as Tehran's favoured candidate." 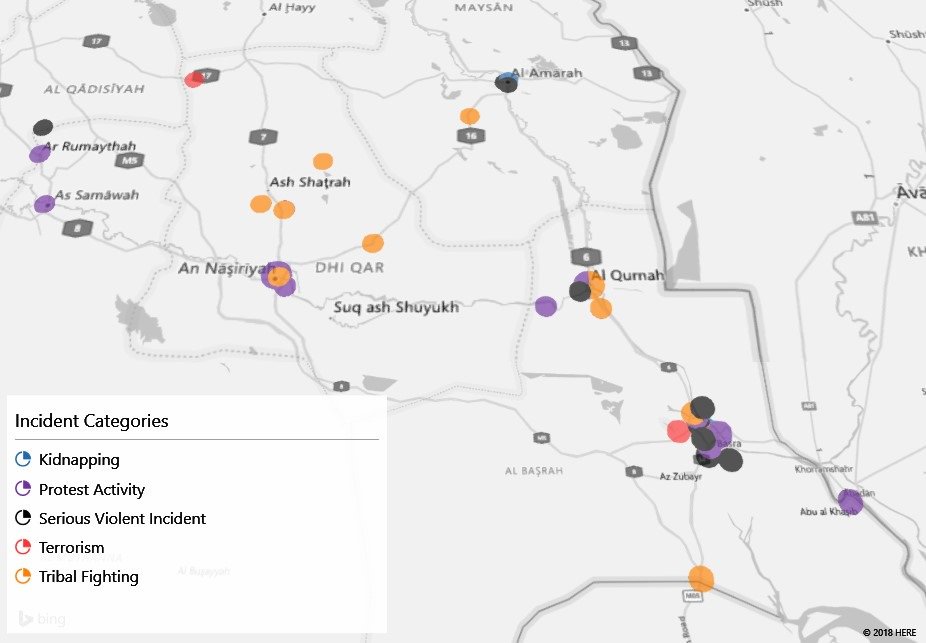