robert parry on the dems' strategy

hillary better stay in the woods.

she sticks her head out again, reporters better have tough questions and she better have the desire to finally take accountability.


The Democrats’ disappointing loss in a special election to fill a congressional seat in an affluent Atlanta suburb is just the latest indication that the strategy of demonizing Trump and blaming Russia for Hillary Clinton’s 2016 defeat may not be the golden ticket that some Democrats had hoped.
Though it’s still early to draw conclusive lessons from Karen Handel’s victory over Jon Ossoff – despite his raising $25 million – one lesson may be that a Middle America backlash is forming against the over-the-top quality of the Trump-accusations and the Russia-bashing, with Republicans rallying against the image of Official Washington’s “deep state” collaborating with Democrats and the mainstream news media to reverse a presidential election.
Indeed, the Democrats may be digging a deeper hole for themselves in terms of reaching out to white working-class voters who abandoned the party in Pennsylvania, Michigan and Wisconsin to put Trump over the top in the Electoral College even though Clinton’s landslide win in California gave her almost three million more votes nationwide.

Clinton’s popular-vote plurality and the #Resistance, which manifested itself in massive protests against Trump’s presidency, gave hope to the Democrats that they didn’t need to undertake a serious self-examination into why the party is in decline across the nation’s heartland. Instead, they decided to stoke the hysteria over alleged Russian “meddling” in the election as the short-cut to bring down Trump and his populist movement.

the 2016 losing strategy is still being utilized.

when you've run off voters, that's what you need to do.

Day 245 and still it continues.

Day 245 and how many times have we been told the end is in sight?

Of course, we were also told this operation would only last weeks.

Still waiting on the Tweet from CNN's Elise where she admits she was wrong and apologizes for screaming in a State Dept briefing because another reporter dared to call it a slog.

While this war continues, there was an attempt to get serious last week.  Margaret Kimberley (BLACK AGENDA REPORT) was at the United National Antiwar Coalition's conference and she reports:


The nature of the American capitalist system requires that every country become either a vassal or an enemy. It gives us the rule of billionaires. The U.S created a mass incarceration system for the sole purpose of crushing the black liberation movement while also creating a profit center in the process.
All of the oppressions are intertwined. Millions of Americans toil under wage slavery or prison slavery and make fortunes for other people. But the contradictions of capitalism are growing more acute, and imperialist war is the outcome of a system trying to maintain itself. The fight for a living minimum wage and the fight against interventions abroad must therefore be addressed together because they are in fact part of a whole.

The UNAC conference also presented an opportunity to renew the African American-centered peace movement. The newly formed Black Alliance for Peace was very much present with leadership such as Black Agenda Report editor Ajamu Baraka playing key roles. Charo Mina-Rojas spoke about the struggle waged by black Colombians in the Buenaventura region of that country. Lawrence Hamm of the People’s Organization for Progress linked the history of mass rebellion with the fight against police violence.


And much more important than sticking your nose in a losing election.  Yes, we'll get to The Alyssa Milanos in a moment.


Neither the Afghanistan War nor the Iraq War has ended.

And what's taking place in Mosul is a horror.

ICRC Iraq‏Verified account @ICRC_IQ  6h6 hours ago
This what happens when cities become battlefields. #Mosul was once known for tolerance, today it is a front-line.
0 replies42 retweets23 likes

A record number of women were killed in US-led coalition air strikes against Isis targets in Syria and Iraq last month, a monitoring tracking civilian casualties caused by airstrikes in the Middle East has said.

At least 57 women died in coalition air strikes in May, along with a minimum of 52 children, according to Airwars, a British non-profit organisation.

The battle for the Old City is becoming the deadliest in the
eight-month-old offensive to capture Mosul, Islamic State's de facto capital in Iraq.
More than 100,000 civilians, of whom half are children, are trapped in its old fragile houses with little food, water, medicine, no electricity and limited access to clinics.

The International Committee of the Red Cross said on Monday sick and wounded civilians escaping through Islamic State lines were dying in "high numbers".

Sarwan wllatzheri‏ @Sarwan_barzanii  22h22 hours ago
#Barzani and the head of the @UN in Iraq discuss the question of the referendum.#kurdistanReferendum 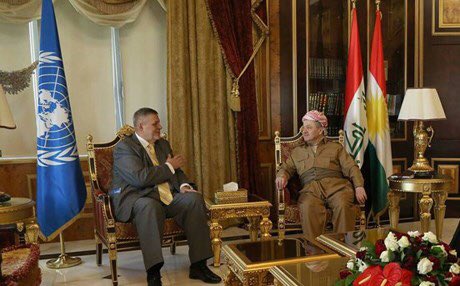 This has been in the news for a little over a week now.

We've ignored it and that's resulted in e-mails.

Our position here has always been it's not the business of anyone outside of Iraq.

Whether it's moving to three independent regions or Kurdish independence only, that's something for Iraq to decide.  As a US senator, Joe Biden proposed a federation.  Our opposition to that, check the archives, was always that what happens to Iraq needs to be decided by Iraq, not imposed on them.

That remains our position.


Now that a vote is finally supposed to take place (this September), the topic has been avoided here because there's no real point in offering opinions in the lead up to the vote -- either my own or quoting others.  It's not my business.

Unlike some people, I do know when to butt out.

Did someone say Alyssa Milano?

The 44-year-old pain in the ass (ask anyone who's worked with her, most recently her castmates on MISTRESSES) hopes to pull off a miracle shortly: She thinks she can be a star on THE CW again -- this despite her being middle-aged.

Alyssa's grip on reality has never been that great -- part of the reason she's whining in public that she's lost her 'fortune.'  (Do another TEEN STEAM workout video, Alyssa!)

Which explains why she's never learned to butt the hell out of the business of others.

For some reason, Alyssa felt this was her 'fight.'

So she and Christopher Gorman (cast anytime someone needs an impotent male -- he played the limp noodle on COVERT AFFAIRS most recently -- why he's never played the monster in Frankenstein -- with that face -- is a puzzle) were in Atlanta and felt the need to campaign for him.

Let's be clear, they don't live in Atlanta.

They were there trying to turn Alyssa into a middle-aged CW star.

They don't live there, they breezed in, and they felt the need to butt in.

I don't endorse if I'm not eligible to vote in the election.

It's about time everyone started considering doing that.

It is not your business if you don't live there.

And we were there twice this month speaking.  And what did I hear?  I heard specifically from people who were angry that Alyssa was sticking her nose into their business.

Alyssa, you helped piss off a lot of potential Ossoff supporters.

You may think you're coming to the 'rescue' of 'the little people.'

But the people in that area who were aware of your efforts largely felt you were butting in.

You do not know their district or their needs.

And your breezing in and being a know-it-all did not turn out votes.

Of course I will not apologize to Jon Ossoff, who narrowly missed being the first Democrat to represent this district in 39 years. Ossoff will face Republican Karen Handel in a June 20 runoff election, and the nation will be watching. Corporate media and corporate Democrats will portray the contest as a referendum on Donald Trump. They will encourage us to confuse the Democratic party label with opposition to the military budget and runaway privatization of roads, schools and nearly everything else in sight. They’ll trot out their old tired sainted John Lewis, who blessed Hillary Clinton. But Jon Ossoff is a corporate Democrat.
While the 6th district urgently need mass transit expansion, they’re now building privatized express lanes on interstates 75 and 575 right through the heart of the 6th district. Privatizing the interstates is apparently OK with Jon Ossoff since he doesn’t say a word about it. As far as we know, Jon Ossoff does not support Medicare For All, the only practical alternative to the high premiums and spotty coverage of Obamacare, and the meaner version of Obamacare pushed by Republican Speaker Paul Ryan. Ossoff brags incessantly about his experience in “national security” as if the national security policies of the past decade and more have the nation more instead of less secure, and touts his willingness to work with Republicans to see our money isn’t wasted. That’s codespeak for Republicans who want to sound like Republicans, and Democrats who want to sound like Republicans.
It looks like we’ll be choosing between a pro-privatization Republican and a pro-privatization Democrat, between a pro-war Republican and a pro-war Democrat, between a Republican who opposes Medicare For All and a Democrat who does the same, between a Republican who’s against free tuition and a Democrat who agrees with her.

That's someone to elect to office?

Oh, right, he had a "D" after his name and apparently that's all that matter to Alyssa.

(Before any e-mails come in, I have no interest in Jane Fonda's comments.  Jane lived in Atlanta for years and has every right to comment.  It's the same as our own Betty commenting on something in Atlanta because she grew up there.  That's different than breezing in to shoot a pilot and trying to tell the people what to do.  More importantly, in our two visits to Atlanta this month, I specifically and repeatedly heard complaints about Alyssa -- from Dem voters.)