it's like if barack did it, it never happened.

that's how adam schiff and other fools act.


but we're not supposed to notice that?

we're not supposed to be aware of it?

maybe shout out a 'yeah!' every few minutes?

wtf, am i tina yothers in an episode of 'family ties'?

Monday, May 1, 2017.  Chaos and violence continue, The Mosul Slog continues, reconciliation in Iraq now depends . . . on US dollars according to the Foreign Minister, another US military death in Iraq over the weekend, and much more.


Saturday brought news of another US military death in Iraq.  Sunday, the fallen was identified as 1st Lt Weston C. Lee.

Vic Watts‏ @Fightneverquit_  17h17 hours ago
RIP Army Ranger Weston Lee, from Bluffton GA, was killed in Iraq this weekend. He was 25. Gone too soon. HERO


The US Defense Dept issued the following statement:


The Department of Defense announced today the death of a soldier who was supporting Operation Inherent Resolve.
1st Lt. Weston C. Lee, 25, of Bluffton, Georgia, died April 29, in Mosul, Iraq, from injuries while conducting security as part of advise and assist support to partnered forces. The incident is under investigation.
He was assigned to the 1st Battalion, 325th Infantry Regiment, 2nd Brigade Combat Team, 82nd Airborne Division, Fort Bragg, North Carolina.


Another fatality in the never-ending Iraq War.

Part of the operation to liberate or 'liberate' Mosul.

Mosul was seized by the Islamic State in June of 2014.

The Baghdad-based government was content to sit on their ass for over two years.

They were in no rush to help the civilians in Mosul.

It was two years and four months before they started the operation to liberate or 'liberate' Mosul.


And the claim now is that it will be over shortly.


The battle against Isis in western Mosul should be over in May, Iraqi army's chief of staff said on Sunday (30 April) amid two fresh militant attacks on army positions that killed at least 20 security personnel.
The Iraqi army estimates that only up to 300 militants remain in the city, most of whom are foreign fighters. There were nearly 6,000 militants at the start of the west Mosul offensive in February. The eastern side of the city was liberated in late January.


Should it be over in May?

It's already lasted longer than the Gulf War of the 90s.

Anyone want to point that reality out?

But they will shortly,  we are told, be able to defeat 300 fighters.

It's really funny how the militias can get tough with civilians but have been too cowardly to fight ISIS.  That is the reality.  The press works hard to cover that up.


Look how Mosul's been destroyed in the video below.

The cowards have destroyed the city.

The cowards who can't fight have destroyed the city.

Bomb it to hell and pretend that shows courage.

Just like pretending that allowing the Islamic State to occupy it for over two years showed courage.

How many had to die in bombings because the Iraqi forces were too cowardly to fight the terrorists?

You can be damn sure the Baghdad-based government wouldn't have allowed Baghdad to be leveled like that.


But the Shi'ite dominated government doesn't care a great deal about what happens to Sunni areas. 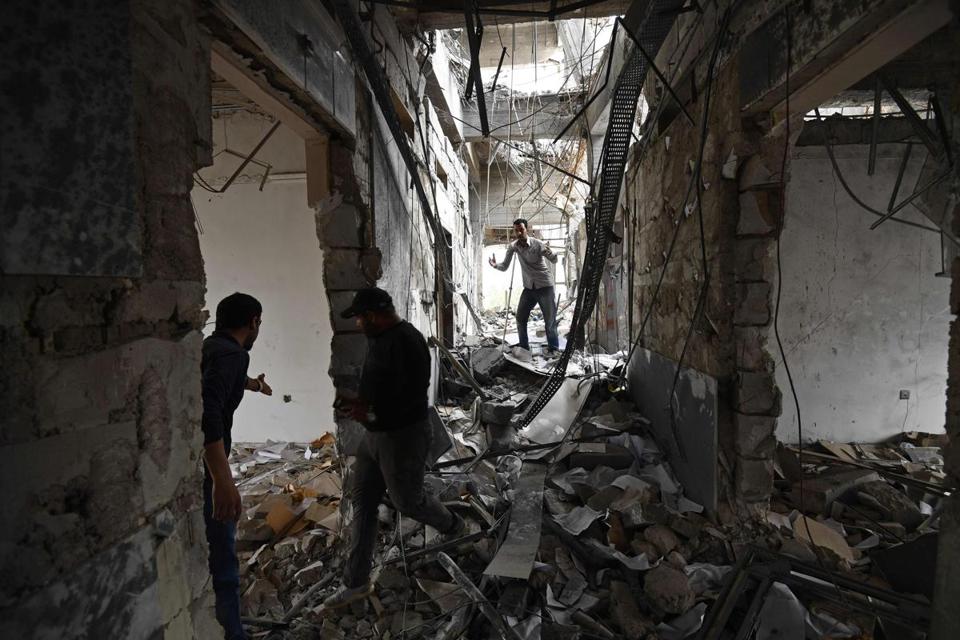 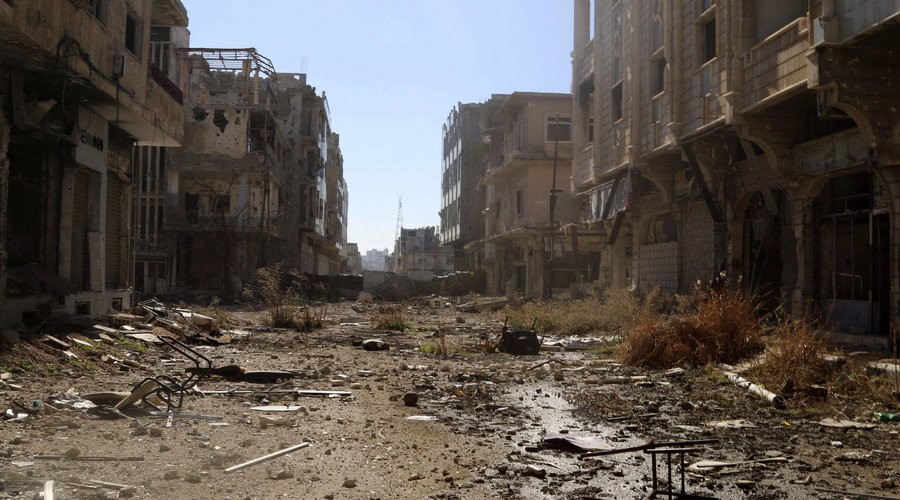 PRESS TV speaks with Scott Rickard about the civilians killed by US strikes and offers this summery of their video report:


Scott Rickard, a former American intelligence linguist, believes that US strikes have killed many more civilians in Iraq and Syria than the 352 acknowledged by the Pentagon.
“The US government is misrepresenting the actual facts. The facts have remained over and over again that tens of thousands of individuals that are innocent have actually been killed not only in Iraq and Syria but elsewhere. But certainly in Syria alone, it’s well beyond 350 and obviously in Iraq it’s hundreds of thousands,” Rickard told Press TV on Monday.

Iraq's Parliament speaker, Salim al-Jabouri, one of the highest ranking Sunni government officials, has said that reports of increased civilian casualties in western Mosul are of "great concern."
When Haider al-Abadi took office in 2014, he promised reforms that would hold corrupt Iraqi leadership accountable and allocate more of a political stake to the country's Sunnis. Al-Abadi has handed more control over to Iraq's regional leadership and appointed a Sunni to lead the Ministry of Defense. But some Iraqis are warning the outcome of the Mosul operation could be pivotal for how the country's Sunnis view Baghdad's Shiite-dominated government.

Iraq's foreign minister has warned such a massive reconciliation effort will need funding and support akin to the Marshall Plan that helped western Europe recover from the devastation of World War II.

Well, for starters there have been 2 Ministers of Defense since 2014 under Hayder al-Abadi -- the first one was sacked.

As for national reconciliation, dropping back to Friday's snapshot:


THE BAGHDAD POST reports that MP Mohamed al-Ja'fari has said that the reconciliation is "doomed to failure."

This is just one opinion, right?

He's a member of State Of Law.

State Of Law is the political coalition created by Nouri al-Maliki to avoid running with his political party (Dawa).  So State Of Law is making clear that they remain opposed to reconciliation.

He's also a member of Nouri's State Of Law coalition.

Which explains why he does nothing to bring about reconciliation either.


So get ready because the never-ending Iraq War is never going to end.

As long as the government persecutes a group, some organization will rise up -- it's the basic reaction to persecution.


But don't worry, George tells us, with money, there will be reconciliation.

Nancy Pelosi was Speaker of the House, it was 2007.  And Iraq promised reconciliation.

To keep getting billions.


They never met the benchmarks then-prime minister Nouri al-Maliki signed off on.

But they kept getting money, remember?


And no strings attached.

Even though, remember, Nancy Pelosi, failure to live up to the benchmarks was supposed to result in pulling all funding.


The United Nations issued the following undercount of deaths in Iraq for the month of April:


Baghdad, Iraq, 01 May 2017 – A total of 317 Iraqi civilians were killed and another 403 injured in acts of terrorism, violence and armed conflict in Iraq in April 2017*, according to casualty figures recorded by the United Nations Assistance Mission for Iraq (UNAMI).

The number of civilians killed in April (not including police) was 309, while the number of injured (not including police) was 387.
Ninewa was the most affected Governorate, with 276 casualties (153 killed, 123 injured). Baghdad Governorate followed 55 killed and 179 injured, and Salah al-Din had 15 killed and 43 injured.
According to information obtained by UNAMI from the Health Directorate in Anbar, the Governorate suffered a total of 74 civilian casualties (39 killed and 35 injured). Figures are updated until 27 April, inclusive.
Special Representative of the Secretary-General (SRSG) for Iraq, Mr. Ján Kubiš, said civilians continue to pay a heavy price in the conflict, notably in Ninewa where in the city of Mosul Iraqi Security Forces are confronting the Daesh terrorists in heavy street fighting.
“Daesh terrorists have detonated car bombs in residential neighbourhoods in Mosul and attacked civilians desperately fleeing the fighting as the security forces liberate more territory from the terrorists. But Daesh’s atrocities were not confined to the combat zones and spared no one. They have struck in liberated areas where people are trying to rebuild their lives, using suicide bombers as in the attack in the Sunni heartland of Tikrit in Salah Al-Din Governorate earlier in April. They have also attacked with a suicide bombing in the Karrada neighbourhood of the Iraqi capital of Baghdad last weekend.”
“But Daesh’s savage campaign of terror has failed to weaken the will and the unity of the Iraqi people, who are increasingly seeing victory against the terrorists within reach,” Mr. Kubiš said.

*CAVEATS: In general, UNAMI has been hindered in effectively verifying casualties in conflict areas. Figures for casualties from Anbar Governorate are provided by the Health Directorate and are noted in the April casualty report. Casualty figures obtained from the Anbar Health Directorate might not fully reflect the real number of casualties in those areas due to the increased volatility of the situation on the ground and the disruption of services. In some cases, UNAMI could only partially verify certain incidents. UNAMI has also received, without being able to verify, reports of large numbers of casualties along with unknown numbers of persons who have died from secondary effects of violence after having fled their homes due to exposure to the elements, lack of water, food, medicines and health care. Since the start of the military operations to retake Mosul and other areas in Ninewa, UNAMI has received several reports of incidents involving civilian casualties, which at times it has been unable to verify. For these reasons, the figures reported have to be considered as the absolute minimum.
****************
For more information, please contact: Mr. Samir Ghattas, Director of Public Information/Spokesperson
United Nations Assistance Mission for Iraq, Phone: +964 790 193 1281, Email: ghattass@un.org
or the UNAMI Public Information Office: unami-information@un.org