women should reject 'the unicorn'

'he's like catnip to these women' insists a failed 'saturday night live' actress in a promo for cbs' new show 'the unicorn.'

are any women behind the scenes of this stupid show?

walton goggins would never be catnip to women.

he looks like a meth addict with that skin stretched taunt as a drum across his face.

that hair is ridiculous for any 1 but especially a grown man of 47.

'the unicorn' is crap.

it's supposed to be a romantic comedy that women want to see.  no, no woman wants to walton jr. try to be romantic.  he's butt ugly.

and he has no charisma.

i'm so sick of these men pimping ideas of what women find sexy and it's always these ugly men.

why do they do that?

they're happy to pit women against women, they're happy to refuse to cast even plain women.  but they will repeatedly cast an ugly man as a romantic lead and we're supposed to accept it.

we should reject this garbage.

Monday, August 19, 2019.  What might stop the US deportations to Iraq, the corruption in Iraq is so bad that even the NDI is seeing objections to it in their polling, and much more.

An e-mail notes last night's entry and that US House Rep Tulsi Gabbard's plans are met with skepticism here.  Yes, they are.  She talked about taking on War Hawks and ending forever wars in interview after interview and then, the last week of July, she's on a debate stage with War Hawk Joe Biden and she refuses to call him out and then, in the days after, makes excuses for him.  She is a fake ass and we don't pretend otherwise.


If you do, that's on you.  But as for her campaign's nonsense that we called out last night:

"We spend $4 billion every month on a war in Afghanistan. How can we look our veterans in the eye & tell them we have no money for their healthcare? As president, I’ll work to end these wars, bring our troops home, & treat our veterans with the respect they deserve." —TeamTulsi


Who has been telling the veterans "we have no money for their healthcare"?  Who?

That's the stupidest remark I've seen from her campaign so far and that's really saying something.

If anyone has said that in our government, as a member of the House, she should have immediately called for hearings.

And we all get that, right?

That she's a sitting member of Congress.  And that she can call hearings.  And that if she ever wanted to, she could work with Democrats in Congress on veterans issues.  If she wanted to.

But her campaign's Tweeting that veterans are being told that "we have no money for their healthcare."  That's nonsense.  It's a lie and it's garbage and I really think that she's a stupid idiot for being in the reserves and making some of the statements she's made.  They go against what you're allowed to say while you are serving.

We went easy on her here previously.  We take you at your word until you demonstrate that you're full of s**t which she did.

So she gets no pass anymore.

If she's concerned about veterans issues, why the hell hasn't she led on that in the House?

And don't whine that she's not on the House Veterans Affairs Committee.  She can lead from outside the Committee, she can introduce legislation, as a non-Committee member she can offer testimony, there is so much that she could do.

But maybe the better question is: Why isn't Tulsi on the House Veterans Affairs Committee?

And don't whine about Nancy Pelosi here.  This is her soft spot and Nancy knows it.  She was an idiot to turn the Democratic side of the Committee over to now convicted-felon Corinne Brown.  Veterans were appalled by that decision -- rightly so.  And Corinne's arrest and conviction since that decision was made leaves Nancy vulnerable with regards to that Committee.  If Tulsi wanted to be on it, she'd be on it.  If Nancy tried to stop her, all Tulsi would have to do is go public and VSOs would object to Nancy decision.

She's done nothing in the House to help veterans with their healthcare but her team wants to pretend that a President Tulsi will be different.  Manana.  That's becoming her campaign slogan.  I didn't do anything today but tomorrow -- pinkie swear! -- I will.

And some people may believe her.  But a lot of us who hoped she meant what she was saying have already seen that wasn't the case.

For months, she made herself a distraction by pretending to be a tough talker who would end wars but she couldn't even hold Joe Biden accountable on stage.  She's wasted everyone's time and should stop conning people and just drop out of the race.  She's not getting the nomination.  Her support in polls remains pathetic.  I'm not surprised.  I've noted here in multiple snapshots that she has no real support on campus.  I've noted that Beto O'Rourke has more support on campus than Tulsi does.  That should be her core support -- college students.  But they're for Bernie Sanders or Elizabeth Warren.  They're not for Tulsi.

Having exposed herself in the July debate, she really should do the other candidates a favor and drop out so that she's not distracting from real potentials.


I would have loved to have seen a strong run by her but that's not what she's offered.  That's her fault, not anyone else's.

Happy #WHD2019! The U.S. is proud to be the largest donor of humanitarian assistance in Iraq - $730 million this year! We are proud supporters of #WomenHumanitarians today and every day. #USIraqPartnership #WorldHumanitarianDay 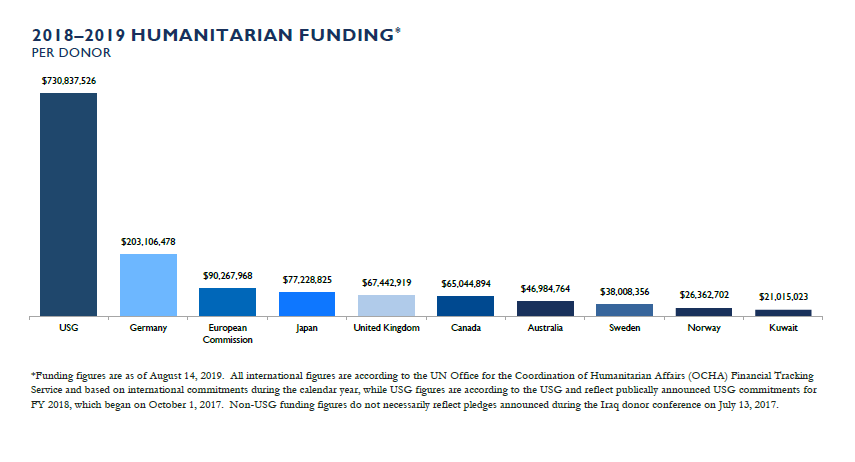 
Yes, the US pays money to the puppet government.  Where does the money go?  It doesn't go to better the Iraqi people's lives.  $750 million is a lot of money for a country that has less than 40 million people. The World Bank estimate is Iraq has 38.27 million people. That's before you factor in that it's an oil rich country..  The US is handing over $750 million?  That's roughly 19.2 million for each Iraqi citizen.  Where's the money really going because, year after year, it hasn't gone to the Iraqi people.

There's something very sick about handing money over to a government that you know is corrupt but pretending otherwise and patting yourselves on the back while you pretend the money goes to the Iraqi people.


The National Democratic Institute is not about democracy, to be clear.  If you're late to the story, see Naomi Klein's work for THE GUARDIAN on the NDI and the NED -- don't go to THE NATION, they carried Naomi's columns but weren't interested in taking on Mad Maddie Albright -- though happy to reprint Naomi on James Baker and the Republicans.

The NDI is not anyone I endorse or pretend does great work.

But they have some polling out that we will note.

Popular pessimism in #Iraq is driven by perceptions of endemic corruption + low levels of trust in government’s ability to address major concerns such as jobs and unemployment. Large majorities (83%) say both corruption and unemployment are getting worse. ndi.org/publications/n… 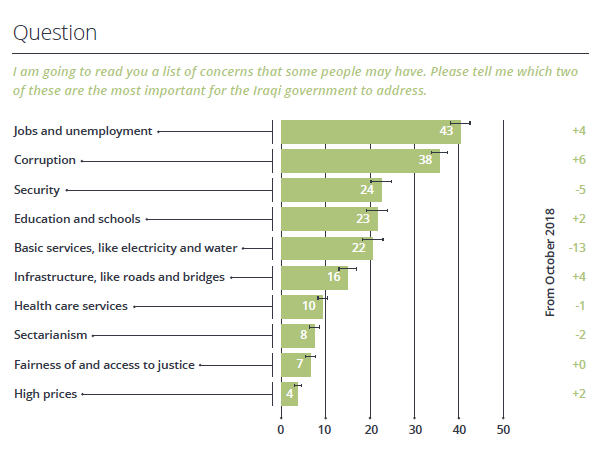 Corruption is a major driver of pessimism for people in #Iraq, especially widespread perceptions of corruption among senior government officials. More than 3 in 10 Iraqis report being forced to pay a bribe in at least half of interactions with authorities. ndi.org/publications/n… 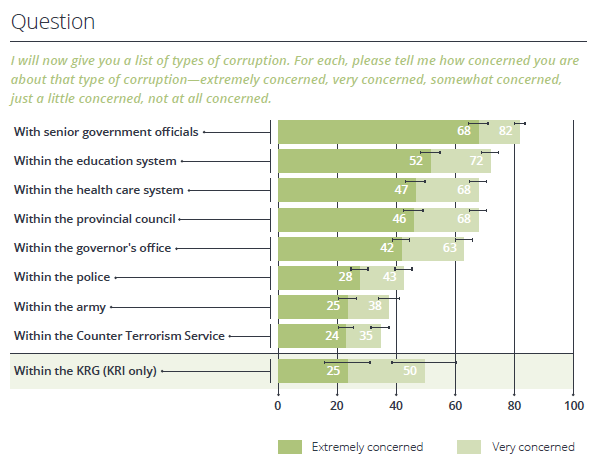 
The Council of Representatives wants to invite Prime Minister Adil Abdul Mahdi and five ministers to answer questions about corruption, but senior aides to the prime minister have objected, according to an opposition politician.
The deputy head of the Wisdom Movement (al-Hikma) Asaad al-Morshidy said on Sunday (August 18) that “the Council of Representatives is attempting to invite Abdul Mahdi and five ministers…but several finance aides close to the government are hindering the process and pressuring Abdul Mahdi not to pursue corruption cases against some people.”
“Adil Abdul Mahid always talks about the necessity of ending corruption, but he has not taken any serious steps to eliminate corruption. He has surrendered to private forces and collusion more than former prime ministers.”
Recently [t]he Sairoon Alliance described Abdul Mahdi as a failed prime minister and warned that it would take a harder line in the future.


Mahdi has done nothing.


For the first time in nearly a decade of NDI polling, half of Iraqis said they either weren’t sure they'd vote in the upcoming provincial elections, or wouldn’t vote at all. But there’s still time to enact needed electoral reform + earn voters' confidence: ndi.org/publications/n… 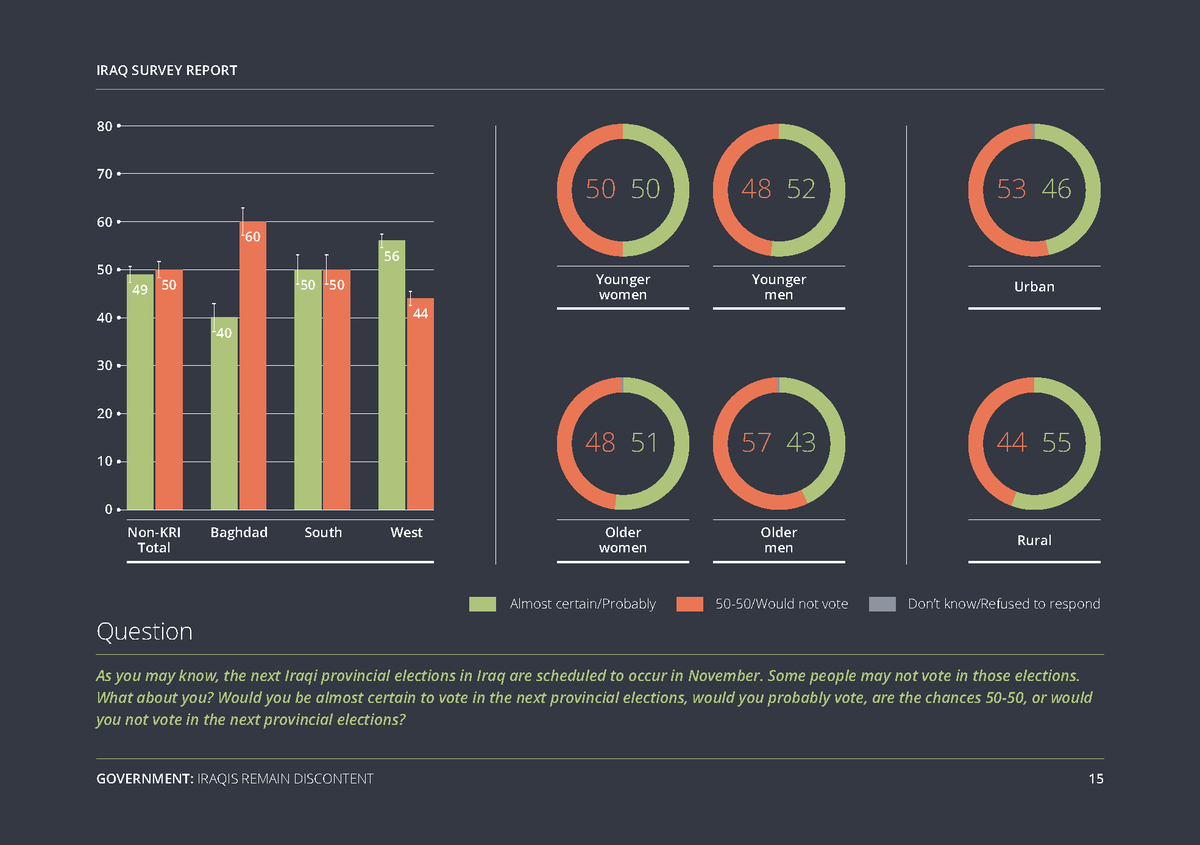 Changes in the voting procedures are taking place -- not good ones, but Omar Sattar (AL-MONITOR) reports:


Recent amendments made to the provincial and district council elections law have sparked a wave of criticism in Iraq as the national parliament adopted a change in the Sainte-Lague voting system formula that was rejected by small blocs and parties, as well as by elites, human rights organizations and civil society organizations.
Parliament voted July 22 to amend the provincial elections law and adopt a first electoral divisor of 1.9 under the Sainte-Lague proportional representation seat-allocation system, compared with 1.7 in the 2018 elections for the national parliament. The higher divisor will give large electoral blocs a greater advantage over smaller blocs in terms of winning seats in local parliaments.
The provincial elections are scheduled for April 2020.
The Sainte-Lague system is a mathematical method of allocating parliamentary seats. Votes received by each bloc are divided by a denominator that starts with 1 or above but lower than 2. When votes are divided by a smaller initial number, small lists have better chances of winning seats. The higher the electoral denominator, the fewer the chances for smaller lists and the greater the opportunities for big lists. Under the Sainte-Lague system, vote totals are also divided by succeeding odd numbers — 3, 5, 7 and upward — as necessary to determine seat allocations. For example, if a bloc's vote total divided by 7 was greater than another bloc's vote total divided by 1.9, the first bloc would receive four seats before the other bloc could even receive one seat.


Meanwhile, the US continues to deport people to Iraq.

A return to Iraq would be a death sentence.’ — This man has lived in the U.S since he was 3 years old, but the Trump admin could put his life at risk by deporting him to Iraq
Posted by Sex And Politics and Screeds and Attitude at 8/20/2019 01:46:00 AM