Max Blumenthal‏Verified account @MaxBlumenthal 5h5 hours ago
Max Blumenthal Retweeted William Craddick
The Integrity Initiative is moving its smear machine into the US through a quiet partnership w/ the State Dept's Global Engagement Center. The ex-director of this shady taxpayer funded outfit says he supports domestic propaganda - and that it was his job.
Max Blumenthal added, 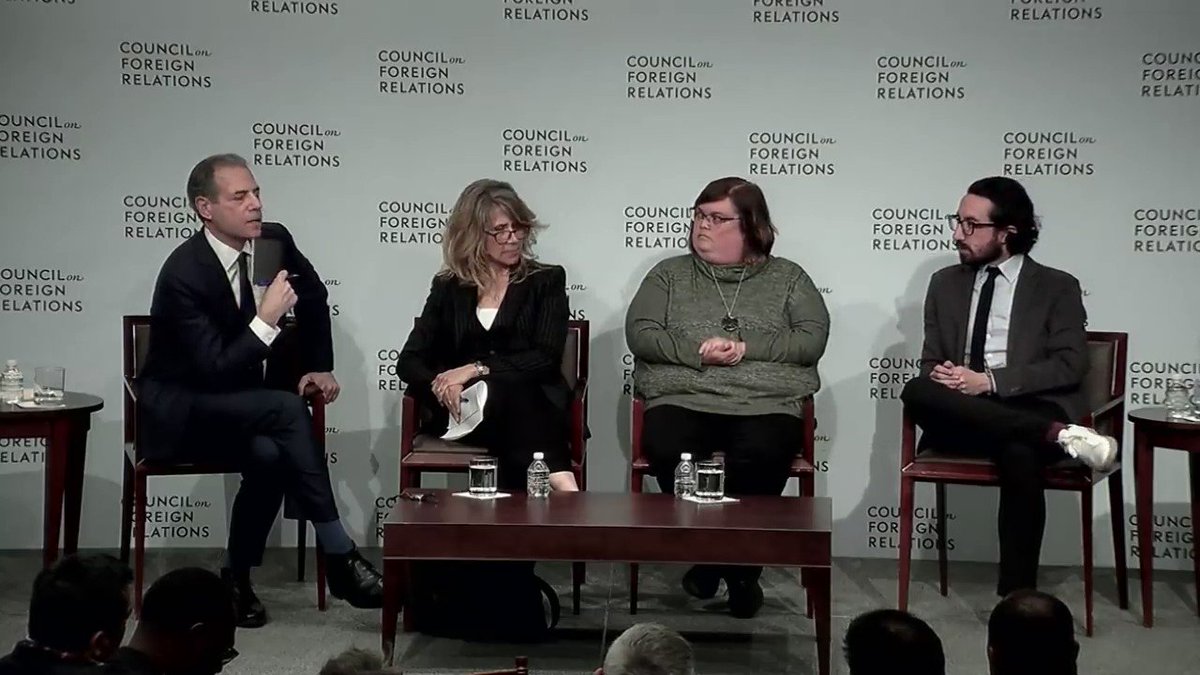 2:16
William Craddick @williamcraddick
At a Council on Foreign Relations forum about "fake news," former Editor at Time Magazine Richard Stengel directly states that he supports the use of propaganda on American citizens - then shuts the session down when…
Show this thread
10 replies186 retweets212 likes
Show this thread


all the hysteria over russia and there's still no evidence.

yet the same people whining about russia continue to ignore the reality of the integrity initiative.

that's propaganda and its aimed at americans.

in england, it's attempted to destroy jeremy corbin - among other things.

we should be very worried about it.

Thanks to the Anonymous hacker community the work of the Integrity Initiative  has been exposed to the public. The Integrity Initiative is a British “charity” founded in 2015. Its mission is to “bring to the attention of politicians, policy-makers, opinion leaders and other interested parties the threat posed by Russia to democratic institutions in the United Kingdom, across Europe and North America.” That mission is suspect in and of itself, a phony trope meant to cover up its own imperialist wrong doing. The Integrity Initiative is an arm of the British government and has received more than $2 million in funding from the British Foreign Office and Defense department. It has also raised money from NATO, Facebook and rightwing foundations.
The Integrity Initiative is a means of undermining the sovereignty of the British people by manipulating them with lies. It engaged in numerous efforts to libel Labour Party leader Jeremy Corbyn and prevent him from ever being elected prime minister. Corbyn has been accused of Soviet era espionage, anti-Semitism and anything else his enemies choose to use against him. Academics and writers who spoke out against UK involvement in attacks on Syria were likewise targeted by The Timesand other influential British media. The reporters involved were part of this Integrity Initiative campaign. The attacks are consistent and are obviously coordinated at a very high level.
Integrity Initiative director Christopher Donnelly  is a former member of the British Army Intelligence Corps. He also helped to create the U.S. Army’s Foreign Military Studies Office at Fort Leavenworth, and served as an advisor to several Secretaries General at NATO. After the NATO instigated coup against the elected Ukrainian government Donnelly recommended placing mines in the Sevastopol harbor, an obvious provocation.
When Integrity Initiative isn’t planning to start wars it plots to interfere in the affairs of other countries through orchestrated “clusters” of journalists and academics. The Spanish cluster  quashed the appointment of a new defense secretary through the use of a coordinated social media campaign. They were also involved in subverting the Catalan independence vote.
Clusters are operating not just in the UK and Spain but in France, Germany, Greece, Italy, Montenegro, Netherlands, Norway and Lithuania. After Julian Assange revealed the extent of interference in Spain the cluster targeted the Ecuadorean government to end his asylum.

There is evidence that the Integrity Initiative sent an operative into the Bernie Sanders 2016 campaign for the Democratic Party presidential nomination. An Englishman named Simon Bracey-Lane  got much media attention for volunteering in the Sanders Iowa caucus campaign. Bracey-Lane is now a research fellow at the Institute for Statecraft, the Integrity Initiative’s parent company. There was foreign meddling in the 2016 election but it came from British spooks like Christopher Steele and undercover operatives, not Russian agents.


In Iraq today, another unannounced visit.

The Iraq War, the ongoing Iraq War, hits the 16 year mark in two months and still US officials have to make "unannounced visits."  All these years later.

ABC avoids reality by allowing Elizabeth McLaughlin and Conor Finnegan to insist, "The president visited Iraq, also unannounced, the day after Christmas, saying the U.S. still could use bases there for operations in Syria."

They have all been unannounced.

BAGHDAD — In an unannounced visit shrouded in secrecy, Vice President Joseph R. Biden Jr. came to Iraq on Thursday for the first time in almost five years, ...
New York Times
As US president, Barak Obama made one visit to Iraq in his two terms (eight years).  Guess what?  It was unannounced.

President Visits With Troops And Generals, Calls For Iraqis To Take Control Of Their Country On Unannounced Trip.

Mark Knoller Reports That Former President Made Four Trips To Iraq, Two To Afghanistan During His Presidency.
CBS News

And, yes, it was also true of Afghanistan.

BAGRAM AIR BASE, Afghanistan — President Obama arrived in Afghanistan on Sunday for an unannounced visit to mark Memorial Day with U.S. troops, now in ...
Washington Post

Get it yet?  If not, here's the BBC's Becky Branford:
Almost every visit by a Western figure to a warzone since the US-led invasion of Afghanistan in 2001 has been done without warning.
US President Barack Obama made regular unannounced visits to Afghanistan, as did Britain's Prime Minister Tony Blair to Iraq.
Earlier this year Secretary of State John Kerry turned up in Somalia, a war-ravaged state currently waging an armed campaign against al-Shabab Islamist rebels - with reports suggesting even Somali officials believed a more junior US official would be attending.
But clearly these leaders - and their advisers - judge that the advantages of paying these visits outweigh the attendant security risks, both in terms of boosting morale of personnel overseas and in giving the leader in question a PR lift.
For those attempting to provide 'context,' grasp that there was a world before President Donald Trump (and there will be a world after him).  Back to Pompeo:


The US State Dept issued the following this morning:


The below is attributable to Deputy Spokesperson Robert Palladino:‎
Secretary Michael R. Pompeo met today with Iraq’s Council of Representatives Speaker Mohammed al-Halbusi and members of the Council of Representatives Foreign-Relations Committee. The Secretary emphasized U.S. support for the long-term bilateral partnership, anchored by the Strategic Framework Agreement, and the necessity of supporting Iraq’s democratic institutions, economic development, energy independence, and sovereignty. Secretary Pompeo emphasized the U.S. commitment to addressing Iraq’s security challenges, including the continuation of our security partnership with Iraqi Security Forces.

U.S. Secretary of State Michael Pompeo made an unannounced visit to Baghdad on Wednesday, which appeared partly aimed at patching up relations strained during Donald Trump’s surprise visit last month.

The U.S. president upset Iraqi lawmakers when he visited troops at the Ain Al-Asad base west of Baghdad but didn’t meet with the country’s new prime minister, Adil Abdul-Mahdi, though the two leaders did speak by phone.


If that was the point of the visit, it doesn't appear to have been very successful:


Again, if that was the purpose of the trip, it doesn't appear to have been successful.  But when has the US government ever delivered success in Iraq?

Well, that's not fair of me.  They have helped Big Business make tons of money off the lives of Iraqis because -- blood stained or not -- greed requires dollars, dollars and more dollars.

Sharyl Attkisson 🕵️‍♂️‏Verified account @SharylAttkisson Jan 6
I'll tell you who is *really* unhappy at the thought of pulling out of Syria and Afghanistan. The contractors and the generals connected to the contractors. $$BILLIONS$$ @realDonaldTrump
1,182 replies11,130 retweets26,689 likes

He's linking to this report by Kristen Keo and Mara Revkin (WASHINGTON POST):

In Iraq, the government’s harsh counterterrorism strategy, which is widely perceived as collectively punishing the Sunnis, is generating new grievances that could increase local support for an Islamic State 2.0. More than 19,000 people have been detained on terrorism-related charges since 2014. Over 3,000 have been sentenced to death in rapid-fire trials that are sometimes decided in less than 10 minutes. Convictions are often based on thin and circumstantial evidence, the testimony of secret informants, or confessions induced through torture, making it easy for innocent people to be falsely accused and unfairly punished.


These injustices are fueling anger, and with it, a new wave of violence. Since 2016, the average number of Islamic State attacks in Iraq — including suicide bombings and targeted assassinations — has risen to 75 per month. In August, U.S. and U.N. reports estimated that the number of Islamic State fighters active in Iraq and Syria might exceed 30,000.
In our working paper based on an original household survey of over 1,400 Mosul residents — the Islamic State’s former de facto capital in Iraq — we identify two serious flaws in the government’s approach to prosecuting and punishing individuals accused of joining or supporting the Islamic State. First, it is unwilling to recognize variation in the severity and voluntariness of “collaboration.” Second, it relies heavily on unproven criminal justice and counterterrorism theories.

Ann's Mega Dub
Patricia Arquette thinks she's smart enough to Tweet (she's not)
52 minutes ago
Also Rebecca's "they make laws against us when they can't change o..." which isn't showing up on the side.
Posted by Sex And Politics and Screeds and Attitude at 1/09/2019 10:06:00 PM