the war whores are disgusting 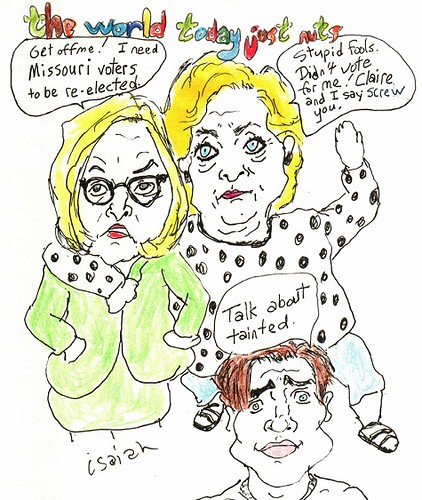 above is Isaiah's THE WORLD TODAY JUST NUTS "Hillary's Tainted Get Out The Vote Effort."

so many worked to destroy us by selling an illegal war.

they're all disgusting unless they've taken accountability.

and most of them have not.  hillary's never taken accountablity.

she pretends to call it a mistake but if she gets asked about it, she gets all rude and nasty.

she only calls it a 'mistake' to try to keep people from asking her about it.

all the whores who supported this illegal war - that's still going on! - are disgusting.


Earlier this month, VARIETY profiled Barbra Streisand . . . for some reason.  I loved the notion that the star had used her power to get the stories made that she wanted.

That awful STAR IS BORN remake?  It wasn't NUTS, she stepped over Debra Winger to steal that role so the film would have been made regardless (and much more believable with another actress).  WHAT'S UP DOC? -- she hates that film to this day.  In the feature, she talked about the hideous HELLO DOLLY.  Are we really supposed to believe that musical wouldn't have been made without Barbra?  It would have been made with Doris Day or any other musical comedy performer (Debbie Reynolds, for example).  FOR PETE'S SAKE -- the film that captured Barbra's homophobia on camera?  (Later, she'd visit the set of one of the RAIDERS and hurl -- joking! -- homophobic comments at Harrison Ford -- you can probably find that online.)  THE OWL & THE PUSSYCAT?  That would have (and should have) been made with Elizabeth Taylor but at least it proved Barbra could have two homophobic movies in her filmography -- what an accomplishment for a woman who would be nothing without her gay fans.  I won't begrudge her YENTL.  But that's over a decade into her box office power.  After that, she's got nothing to brag about or even anything that qualifies as a noble failure.

That got overlooked in all the rightful outrage over her demonstrating that she was someone with too much money and too little common sense: She's cloned her dogs.  She should be ashamed.  Not only because there are rescue dogs in need of homes but also because it shows where her priorities are -- bringing to life dead dogs.  She's is the dead.  The Living Dead.

And the rightful shock over the cloning of dogs led many to miss the most outrageous part of the feature.

This is what the nut case said:

And now, in retrospect, Bush looks quite good compared to Trump. At least he’s not mean-spirited.


Let's quote someone more gifted and more knowledgeable -- certainly more ethical -- than Barbra.  This is Harry Belafonte from his best selling MY SONG:

I really did think -- still do -- that George W. Bush was a terrorist.  My only mistake was in calling him the greatest terrorist in the world, since I had not met them all.  His launching a war against Iraq without cause, and with treacherous intent, resulting in the needless deaths of thousands of American servicemen and -women and tens of thousands of Iraqi citizens, the majority of them civilians, qualified him for the title, as far as I was concerned.  Those thousands of innocent lives lost were, to the Bush Administration, just "collateral damage," a phrase that I find infuriating.  To me, collateral damage is just a brazen attempt to find moral grounds for crimes against humanity.

That reality never occurs to Barbra.  She's apparently stuffed her face so full of fillers that there's no chance for an independent or honest thought to penetrate that skull.

Recently, still needing applause but too lazy to do anything, Barbra's taken to praising herself for not being harassed.  She leaves out the part about how her then live-in Jon Peters harassed plenty of women and Barbra didn't hold him accountable but instead blamed the women.

Today is the 15th anniversary of the start of the ongoing Iraq War and an airhead like Barbra is so out of touch she actually declared this month, "And now, in retrospect, Bush looks quite good compared to Trump. At least he’s not mean-spirited."

Think of all the millions dead and wounded in this illegal war and you start to grasp how a society can arrive at a point where they exclaim, "Off with her head!"

In Iraq, babies are born with birth defects because of the weapons the US used there.  But Barbra's cloning her damn dogs.  She should fear people storming Malibu.  Maybe that would force her to do something wiser with the money too many have foolishly forked over to her.

Andrey‏ @Andreyp_p 3h3 hours ago
Amid the hysteria in Britain & as the 15th anniversary of the illegal invasion of Iraq nears, here's a video of Robert Mueller lying to the world about WMD's This vile criminal, responsible for countless deaths, has been fully rehabilitated by liberals
0:17
963 views
1 reply44 retweets46 likes

Robert Mueller in 2003 ahead of the start of the Iraq War: As Director [George] Tenat has pointed out, Secretary [Colin] Powell presented evidence last week that Baghdad has failed to disarm its Weapons of Mass Destruction willfully attempting to evade and deceive the international  community.  Our particular concern is that Saddam Hussein may supply terrorists with biological, chemical or radiological material.

To which I say, nine years later: Who was right and who was wrong about Iraq?  About the satellite images showing supposed mobile factories for chemical weapons?  About the supposed bunkers of munition workers?  About the stockpiled weapons of mass destruction?  And is it too much to suggest that Powell and [Condi] Rice, in their eagerness to please their president, did indeed make the moral compromises that house Negroes made in the days of slavery?  That had they followed a higher moral calling, they might have helped prevent that war?


Some stand tall,  Some cowards (Barbra, we mean you) slither on their bellies like the snakes they are.

Frank Rich‏Verified account @frankrichny 13h13 hours ago
Here’s my problem with many, though not all, of #NeverTrumpers. Many of the GOP leaders they now eviscerate for enabling Trump also enabled phony WMD evidence & torture before and during Iraq war. As did they.
42 replies67 retweets339 likes


Oh.  Believe he burned you, Barbra, worse than in any of his  film reviews attacking you.

What trash like Barbra and Rachel Maddow have done is muddy the waters.


Fifteen years after the U.S. invasion of Iraq in March 2003, 48% of Americans say the decision to use military force was wrong, while slightly fewer (43%) say it was the right decision. pewrsr.ch/2FTVz3A 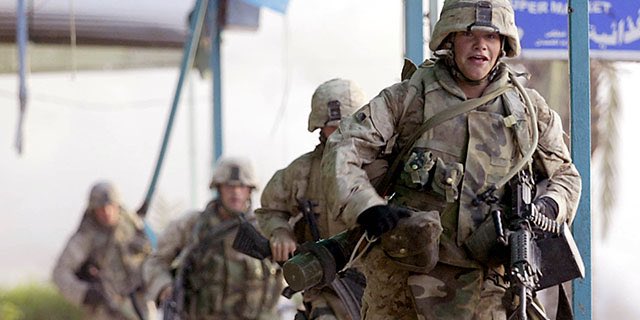 That number should be much higher but when liars go around spinning for the War Merchants like Robert Mueller and Hillary Clinton and Bully Boy Bush, it's no surprise that the number isn't higher.


It's cute to watch the whores line up to redeem the death merchants who sold the Iraq War.  But, hey, they also feel that Hillary Clinton was presidential and she voted for the Iraq War, she supported it and only finally called it a mistake after Barack Obama used it to bury her in the Democratic Party primaries of 2008.  And, only much later, would she explain the "mistake" she made was not to vote for and support the illegal war but to believe that Bully Boy Bush would have sent more US troops into Iraq in March of 2003 than he ended up doing.

That's her "mistake."  And, for the record, though the press has repeatedly insisted in the last four years that she has apologized, she never apologized for the Iraq War.  Nor did she use her time as Secretary of State attempting to help Iraqi women.  She even rejected the pleas of one of her few actual female friends who begged her to do something for Iraqi women.

Cindy Sheehan has an essay about this 15th anniversary of the ongoing tragedy and we'll note this section:

o call the 2003 US invasion and subsequent (and ongoing) occupation of Iraq a "mistake" would also be highly inappropriate. The US war machine and its "coalition" knew exactly what they were doing---the destruction of Iraq to seize the oil fields and enrich the war profiteers has been highly successful for them. The destructive US foreign policy is policy, not “oops, we just fell into a war and made a mess.”

The consequences for today are a horrid legacy of poverty and disease for the people of Iraq. Depleted uranium and poisoned water and land are still killing the people there and the US is still occupying the country despite the fraud of Commander in Grief Obama ending the war in 2009; as agent orange and unexploded land mines are still haunting the people of Vietnam, who "won" the war, but have lost the peace.


The ongoing war has destroyed the country of Iraq and reduced it to a nation of widows and orphans where the median age isn't even 20.  Are they thrilled?  They must be!  We keep hearing that things have never been better in Iraq.  Campbell MacDiarmid (ALJAZEERA) explains that the sentiment of the few rulers and not the feelings of the masses:


"My older brother grew up a few years ahead of me and had friends in different governorates across Iraq but for me, I have only friends in Anbar, I don't have friends in Basra or in other governorates," said Mahmoud Zaki, 34. "Because of what happened with the invasion and the sectarianism that came afterwards divided the Iraqi fabric, it kept us apart."
With dead relatives, lost opportunities and a feeling of insecurity, many Iraqis remain less interested in elections and democracy than taking care of their loved ones. "I don't want to be wealthy; I want to have a decent life, I want to be safe, I want my family to be safe," said Zaki, who spent two years in American-run prisons on spurious accusations of supporting the rebellion.
The ongoing violence even makes many Iraqis nostalgic for the relative stability under the former strongman.

"Under Saddam, you could do whatever you wanted to do, so long as you stayed away from politics and didn't say anything against the government," said Sami Josef, a 32-year-old Christian from Baghdad whose uncle died fighting the Americans. "Until this day, I say God rest the soul of Saddam."


In 2012, Obama won re-election against Sen. John McCain (R-Ariz.), who was one of the biggest hawks in Congress.

In 2012, Barack ran against Mitt Romney.  They're called facts, Terkel.

Need some more?  Ben Rhodes is a hack and a hawk.  You shouldn't promote him if you're talking about a future of wise decisions.

Nor should you promote War Hawk Tammy Duckworth.  She is not a progressive.  And her being in Congress didn't stop Libya from being attacked, did it?

It's interesting that Terkel pretends to be against the Iraq War -- such a poser -- but I'm seeing tons of pro-War Hawks in her article and only  two -- Russ Feingold and Katrina vanden Heuvel -- who actually opposed the war.

The Iraq War started on March 19th (US) and March 20th (Iraq).  That's the time difference.  We'll note the anniversary tomorrow as well.

But for those that don't grasp the Iraq War has continued, note this:

American Values‏ @Americas_Crimes 4h4 hours ago
This week in 2017, the US dropped a 500 lbs bomb on a crowded residential area of West Mosul, Iraq, unleashing a massive explosion, which killed nearly 300 civilians, many of them children. The strike was the US’s most deadly air strike for civilians in 25 years. 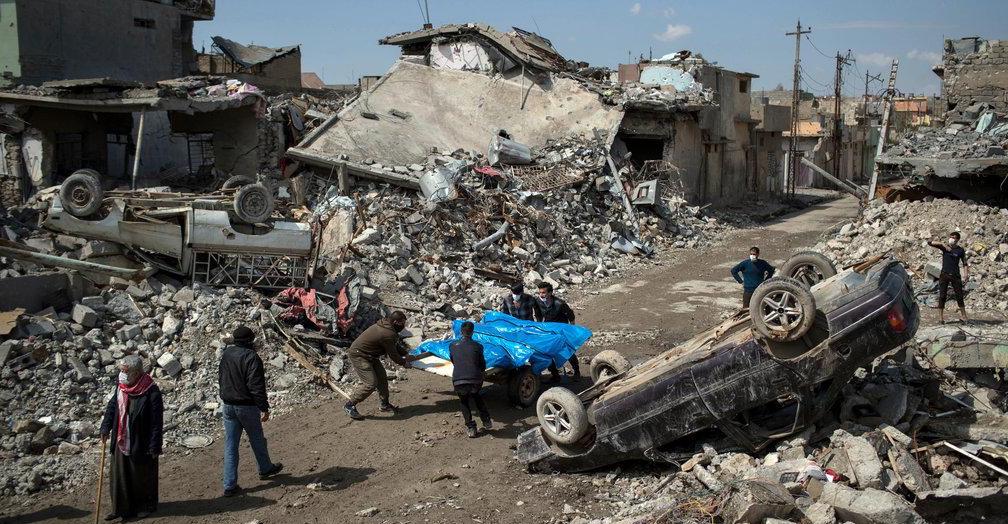 
Also don't forget that seven US service members were killed in the helicopter crash last week in Iraq.  From the US Defense Dept: