well this is really disappointing.

but i guess it's past tense because he loses my respect with this 1.

Ali Abunimah‏Verified account @AliAbunimah 4h4 hours ago
Here’s a secret Palestinians have known for years that “progressives” need to learn: a politician who caves in to the Israel lobby (virtually all of them) will sell you out on anything and everything else. It’s only a matter of time.
8 replies134 retweets263 likes


and i really liked beto and was rooting for him.

REUTERS notes, "Iraq’s prime minister-designate Adel Abdul Mahdi said on Wednesday he would present a new cabinet to parliament for approval next week."  At the start of the month, he was named prime minister-designate.  At that point, the 30 day counter started.  If the Constitution of Iraq is followed, that would mean he had 30 days (from October 2nd) to form a government.  That would mean presenting nominations for a full cabinet to Parliament and getting Parliament to vote each one into office.

Assuming he presents them early in the week, he'll have about ten days to get every nominee confirmed.  Is confirmation expected to be easy?  Hamza Mustafa (ASHARQ AL-AWSAT) explains:

The new cabinet is expected to include between 22 and 23 portfolios, with 70 percent allocated under political consensus and 30 percent for technocrats.

On the other hand, well-informed Iraqi political sources said that Sunni-Shiite differences have emerged over the number of ministries obtained by each component. The sources told Asharq Al-Awsat that the “Sunni Arabs have not yet submitted their candidates for ministerial positions despite the expiry of the deadline” on Wednesday.


It can be done -- and might be done in a 24 hour period -- but that doesn't mean it will be.  There are potential road bumps.  If he didn't get approval by the end of his 30 day period, what would happen?  The president of Iraq, per the Constitution, would name another prime minister-designate.

But it's also true that the Constitution has never been followed before -- not by Nouri al-Maliki, not by Hayder al-Abadi.  (The US-led invasion starts in 2003; however, the Iraqi Constitution was written in 2005. That's why we aren't focusing on the ones prior.  Nouri al-Maliki had two terms as prime minister, Hayder had one.)  Neither of the two could produce a full Cabinet at the end of the 30 day period.  Unlike them, Adel has given lip service to following the Constitution.  He may very well be trying to follow it -- which would be a nice change.

If he doesn't meet the 30 day deadline, what happens next?

Basic logic dictates that the Constitution be read as 30 days and failure means someone else is named prime minister-designate; however, this has never been tested and it could be interpreted to mean the president can re-nominate the same person.

Had this happened in 2010, when Nouri failed to produce a full Cabinet, a new prime minister-designate would have to be announced because of the huge uproar re-nominating Nouri would cause.  He had already proved to be a liar.  The US negotiated The Erbil Agreement to give Nouri a second term as prime minister (after voters said no to him).  The reason the other political blocs signed off on that contract was -- in addition to US tax dollars being used to bribe some factions -- it was a two-way contract.  They gave Nouri the prime minister post.  In exchange, he gave each bloc what they wanted.  Or he did that in The Erbil Agreement.  But he then refused to honor it (and his attorney would later publicly state that the contract was illegal so Nouri didn't have to honor it).

In those first thirty days, he'd already broken the written promise to Iraqiya (the group that came in first in the elections) about putting Ayad Allawi over national security and he had broken his promise to the Kurds to implement Article 150 (when he needed them, he said by December; after he didn't need them he called that off).

So if Jalal Talabani had renominated Nouri, there would have been a huge outcry.  (Also remember that Moqtada al-Sadr's supporters did not want Nouri -- Moqtada held a vote on that specific issue -- who they would support for prime minister.  The Iranian government helped talk Moqtada into supporting Nouri.)

Adel is not as controversial as Nouri was (Nouri was also known, by 2010, to run secret jails and torture chambers).

So if the Constitution were followed and Adel could not get a full Cabinet in 30 days, Saleh could probably renominate him with little flack -- other than from Nouri al-Maliki who would lie that he did it twice -- created a full Cabinet -- despite the fact that he did not meet the deadline either time.  (Nouri still wants to be prime minister and the US is handling him with kid gloves -- he's had two US meets this week alone.  Despite the fact that no one wants him to be prime minister -- not even his political party -- Dawa -- and despite the fact that his term as Vice President has officially and finally ended.)

What should happen?  If he doesn't meet the 30 day deadline, it would be great if Saleh re-nominated him because, for once, the Iraqi constitution would be followed.

What will most likely happen?  With only a partial Cabinet, he would be named prime minister.

If that happens, hopefully some will start to point out that the Iraqi people are the ones who are expected to follow the Constitution -- not their rulers.


The Iraqis were promised a lot -- this despite the fact that they weren't begging for their country to be invaded.  I'm referring, of course, to the Iraqi living in Iraq in 2002 and early 2003.  I'm not referring to all the 'manly' cowards who returned after the US invaded and promptly were elevated (by the US government) into positions of leadership.  Nothing has happened on the freedom and liberation front -- nothing to brag of.

And when the election results are overturned, as Barack Obama did when he was President of the United States (and Iraq?) in 2010 to give Nouri the second term the voters didn't want him to have, it sends a bad message.  Equally true, a Constitution that's never followed is not worth anything and that also sends a bad message.

These are important issues and you might think a US press -- supposedly a free press -- would explore them.  Instead, we get media 'critic' Brian I Look Like A Child Molester Stelter offering this nonsense.

Brian Stelter‏Verified account @brianstelter 13h13 hours ago
AP: "Why have you not yet visited a military base in a combat zone like in Iraq and Afghanistan?" Trump: "Well, I will do that at some point, but I don't think it's overly necessary. I've been very busy with everything that's taking place here. We have the greatest economy..."
871 replies1,119 retweets2,329 likes

Why haven't you done a photo op in Iraq yet!!!!  Bully Boy Bush handed out turkeys!!!!  (And scared the nation when all the networks broke in with their special announcement that year.)  And Barack! He went to Iraq once in his two terms as president.  Once!  And he didn't get to do much because his arrival coincided with a sand storm.  (I'm being generous.  There were fears and the sand storm was used as the excuse for altering his schedule.  The fears were the reason he never again visited Iraq.)

Note how insular and isolated Stelter is: Trump's not gone to Iraq (or Afghanistan) to visit the troops!  Is it vanity or xenophobia that prevents Stelter from grasping that Iraq is not an empty playground but a populated country?  He's not calling for Donald to go meet Adel or any other politician in Iraq.  Apparently, Stelter just wants some sort of family reunion but in Iraq.  He'll bring the potato salad but don't eat any of it, I hear he doesn't wash his hands.


Strange that Stelter can't Tweet about the Women's March on the Pentagon, isn't it?  That action is this weekend.  Bruce A. Dixon (BLACK AGENDA REPORT) notes:


The Greens are not allowed on the ballot in Georgia, thanks to the politicians of both parties who don’t want the competition. So while the Republicans are busy disenfranchising people, and the Democrats are herding people onto buses for early voting, I’ll be in DC this weekend with Ajamu Baraka and Cindy Sheehan and others for the Womens March on the Pentagon. There are some things we’re allowed to vote for, when we’re allowed to vote at all, and some others we are not.
I live in Georgia’s 6th district, where the incumbent Republican congressional rep is the vile and corrupt Karen Handel, Brian Kiemp’s predecessor as GA Secretary of State.. The Democrat running against her is Lucy McBath, a black mother whose unarmed teenage son was gunned down in Florida in 2012. McBath is raising money at a terrific rate and has been polling within two points of Republican Handel for several weeks. Almost-a-congresswoman McBath has lots to say, unfortunately none of it very insightful, about gun safety. Beyond swearing fealty to the apartheid state of Israel, McBath has nothing to say about foreign policy, about the world beyond the shores of the United States. Not a hint. Not a word.
As I wrote last month, 22 out of 32 so-called progressive Democratic party candidates for Congress – those backed by Justice Democrats, Brand New Congress and Our Revolution – have nothing to say about foreign policy beyond support for Israel.
This is beyond troubling. It’s ominous. The US has more than 800 military bases around the planet, fleets in every ocean, and more nukes pointed at more places than anybody, and is bombing four countries that we know about. The US is flying drones over most of Africa, and has special forces operating on the ground in dozens of countries. The US of A spends more on the military than the next ten nations combined, and the military budget which most Democrats voted to approve, is likely to be paid for with cuts to Medicaid, Medicare and social security, and all the forms of federal aid (except police and prisons) provided to local governments.

Apparently there are some things the two capitalist parties will allow us to vote on, and some other things which are completely and utterly off the table, now and forever. Like empire. The Democratic Congressional Campaign Committee, the party’s official corporate pocket, has embraced an unprecedented number of candidates straight from the military and intelligence sectors. Progressive Democrats running for Congress have with few exceptions, chosen to dummy up. But really who are the dummies here? Democratic congressional candidates like McBain are all accomplished grownups. They know where they stand, they just don’t want us to know for sure till after they’re safely elected. It’s a piece of contemptible duplicity which Democrat voters train themselves to accept. It’s one more reason I can never be A Democrat again.

Women’s March on the Pentagon @WomenMarch4Paz
We're ready, we're coming. Huge thanks to @ActivistEleanor and @backboneprog for projecting on the Newseum in DC tonight.…
0 replies3 retweets4 likes

Women’s March on the Pentagon‏ @WomenMarch4Paz 7h7 hours ago
We're ready, we're coming. Huge thanks to @ActivistEleanor and @backboneprog for projecting on the Newseum in DC tonight. Join us this weekend to call for an end to the bipartisan war machine. #WomenRise4Peace marchonpentagon.com

Act Out‏ @Act_Out_ 10h10 hours ago
Writing’s on the wall - literally. Out projecting with @backboneprog before this weekend’s @WomenMarch4Paz #nowar 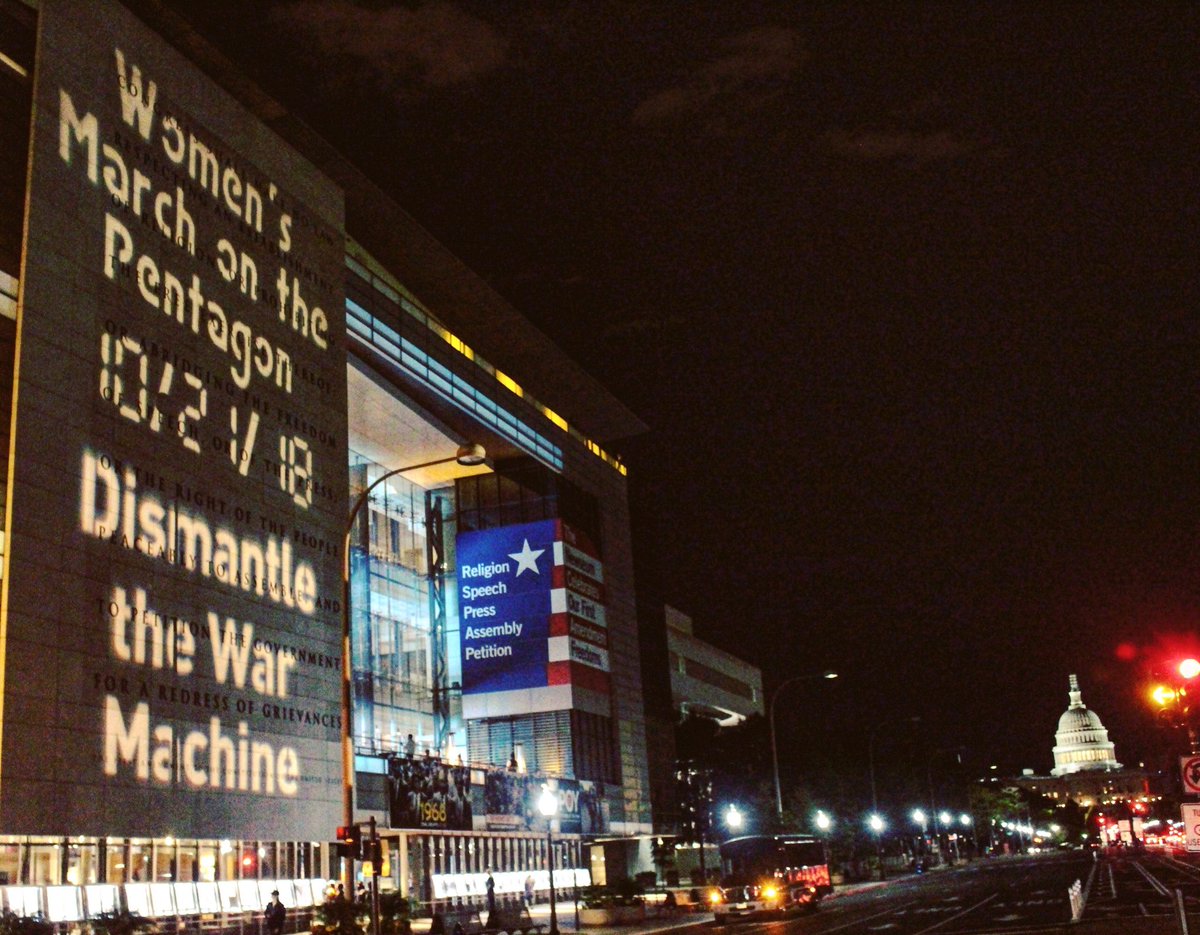 Women’s March on the Pentagon @WomenMarch4Paz
Join us at the Pentagon on October 21st. Hear from @brucedixon and others as we call for an end to the bipartisan war machine. #WomenRise4Peace marchonpentagon.com/march
1 reply7 retweets8 likes