selfies and celebrities, oh my!

did you catch this?

Teen Vogue‏Verified account @TeenVogue  3h3 hours ago
Today, we're announcing a very special issue of Teen Vogue, guest-edited by @HillaryClinton — the first-ever female Presidential candidate nominated by a major party, a woman who sits at the center of a historic paradigm shift. 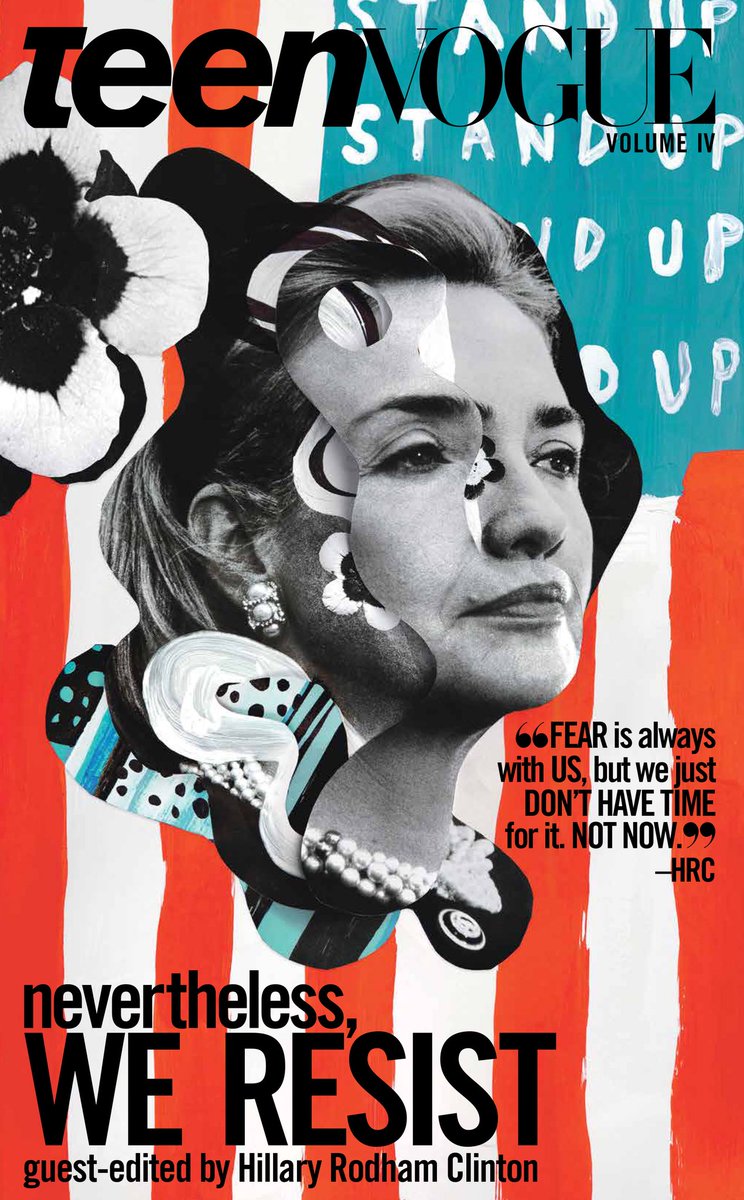 because diana vreeland would return from the grave to kill any 1 stupid enough to put hillary in charge of the real 'vogue.'

'teen vogue' is struggling with readers, circulation's down.

they get to go after the older crowd with hillary, the non-fashionable crowd, the layabouts.

she's been barbara bush-ed and she didn't even see it coming.

it's her own fault for getting so dumpy and fat.

she can't go on the road - campaigning or selling a book - without overeating.

maybe she could write about that?

i don't know what she's going to write about at 'teen vogue' - her childhood ambition to rule the world and how those nasty russians prevented her from being global queen.

she's really headed to the dustbins if 'teen vogue' is the biggest she can pull.

apparently, they think she has a head for teenagers but can't communicate policy.

guess they caught her last campaign.

"You Can't Hurry Love" by Diana Ross & the Supremes (Lynda Laurence and Sherrie Payne performing it with Diana on Oprah Winfrey's syndicated talk show) is one of the 19 number one pop songs (BILLBOARD US singles chart) that Diana Ross has sang on.  November 19th, she'll be on the live broadcast (ABC) of The American Music Awards to perform and to receive the American Music Award for Lifetime Achievement.  Motown Classic is issuing DIAMOND DIANA: THE LEGACY COLLECTION November 17th to note this monumental achievement.


In Iraq, the Baghdad-based government is currently waging war on the Kurds.  Adla Massoud (NEWSWEEK) spoke with the former president of the KRG Massoud Barzani:

Many worry that tensions between Baghdad and Irbil could escalate into a new war. What do you think?
We hope the fighting and bloodshed will cease. Our policy is to seek dialogue, to seek peaceful ways for conflict resolution and conflict prevention with Iraq. If the international community and the coalition...genuinely want to prevent another armed conflict, they can. But if a battle erupts, it means they gave it the green light.

Is Kurdish independence still possible?
What’s going on in [Kurdish territories]...is just temporary because nobody can change the identity of those areas. We are not going to recognize any forced demographic change. The identities of these areas are still Kurdish. We withdrew from many of the areas so as to prevent any kind of conflict and bloodshed. We wanted to prevent any kind of military confrontation to pave the way for dialogue.


September 25th, the KRG held a non-binding referendum to determine the will of the Kurdish people and over 92% of the voters voted for independence.

There is no reason to believe that the Iraqi government will not betray its #Assyrian indigenous citizens.
5 replies6 retweets13 likes

And that's the lesson here though the press ignores it just as they ignored Nouri al-Maliki's attacks when he was prime minister -- the same attacks that led to the rise of ISIS.

What Hayder al-Abadi (Nouri's replacement as prime minister) is getting away with is stunning.

He has used US weapons against the Kurds.

It is against US law -- per treaties and the Leahy Amendment -- for the US to support a regime who attacks their own people.

It would appear that thugs like Hayder and Nouri can't be happy unless they are attacking others.


Under Nouri, the attacks were on the peaceful protesters at first.  Then journalists were attacked if they dared cover the protests.  Soon, he was deploying tanks to rival politicians homes.

It was a process and, as it unfolded, the press remained largely silent.

In fact, THE NEW YORK TIMES even defended the kidnapping of journalists from a public cafe and their subsequent torture by Iraqi forces.

So it wasn't just silence, it was also press applause.

Today, Hayder gets the applause non-stop from Patrick Cockburn of the so-called INDEPENDENT.

But what's taking place now sets the stage for what happens later.

Don't kid and don't come whining to me a year from now about how could you have known?

I think there were almost 40 e-mails from various US 'thinkers' and 'reporters' when Barack Obama finally turned on Nouri al-Maliki (summer 2014) with garbage about how they hadn't seen it.

We charted it in real time.

By 2012, if you were still defending Nouri, you didn't know what the hell you were talking about.

Scotty Horton at ANTIWAR RADIO got it all twisted because he was under the impression Patrick Cockburn was an 'independent' voice.  He wasn't, he's not.  His hatred for the Kurds is only matched by his hatred -- his very well known hatred -- for Arabs.

A real news outlet would have pulled Cockburn off of Iraq a long time ago.  His reporting has always been biased and slanted.

But that doesn't make him very different from the bulk of his peers, does it?


Iraq is in serious trouble but you get b.s. 'reports' about how great the future is.

That's never been addressed so, no, the future for Iraq is not 'sunny' currently.

Iraq’s highest-ranking Sunni leader said Tuesday the growing influence of Iranian-backed Shiite militias looms as the nation’s most pressing future security threat and called for bolstering U.S. military aid to Sunni forces.
In Washington for talks this week with Trump administration officials and congressional leaders, Iraqi Vice President Osama al-Nujaifi is hoping the administration will deliver on pledges to counter Iran’s growing influence inside Iraq and across the Middle East.

Here for more on the call for US military aid.

“As long as the militias’ interests align with Abadi’s, everything is fine,” Belkis Wille, senior Iraq researcher for Human Rights Watch, told VICE News. “But where they diverge, that’s when we might see significant instability — and situations where civilians are more likely to be targeted with impunity.”

The U.S. is hoping Abadi is the man to unite a deeply fractured Iraq, but questions remain about his ability to control the militias, a senior U.S. official told VICE News.

The group known as the Popular Mobilization Forces (PMF), or Hashed al-Shaabi, is cause for serious concern, the senior U.S. official said. Formed in 2014 out of some 40, primarily Shia, militia groups, the PMF played a pivotal role in the fight against ISIS. But the formidable military force is also commonly linked to Iran, and doesn’t necessarily share the same long-term interests as Abadi or the U.S.
“The big concern that we have with regard to the Hashed al-Shaabi are those parts of the Hashed that may not be fully responsive to the orders of the prime minister,” the senior U.S. official said, on condition of anonymity in order to speak more freely.
Not having control of the militias could prove disastrous, particularly if rival military forces start fighting each other to stake claims in a country still shaking off ISIS.

It's worth noting that the Iraqi constitution forbids what's taking place.  The militias are outlawed.

Hayder can't control them.  He invited them in and now he can't do anything about them.

The fight against ISIS brought some temporary cohesion.

And now it's gone.

The real problems have not been addressed.

And now that the cohesion is gone, it's too late to start addressing them.


June 19, 2014, Barack said military alone would not solve the problems.  We agreed.  We applauded that.

But the US never got around to a diplomatic surge.